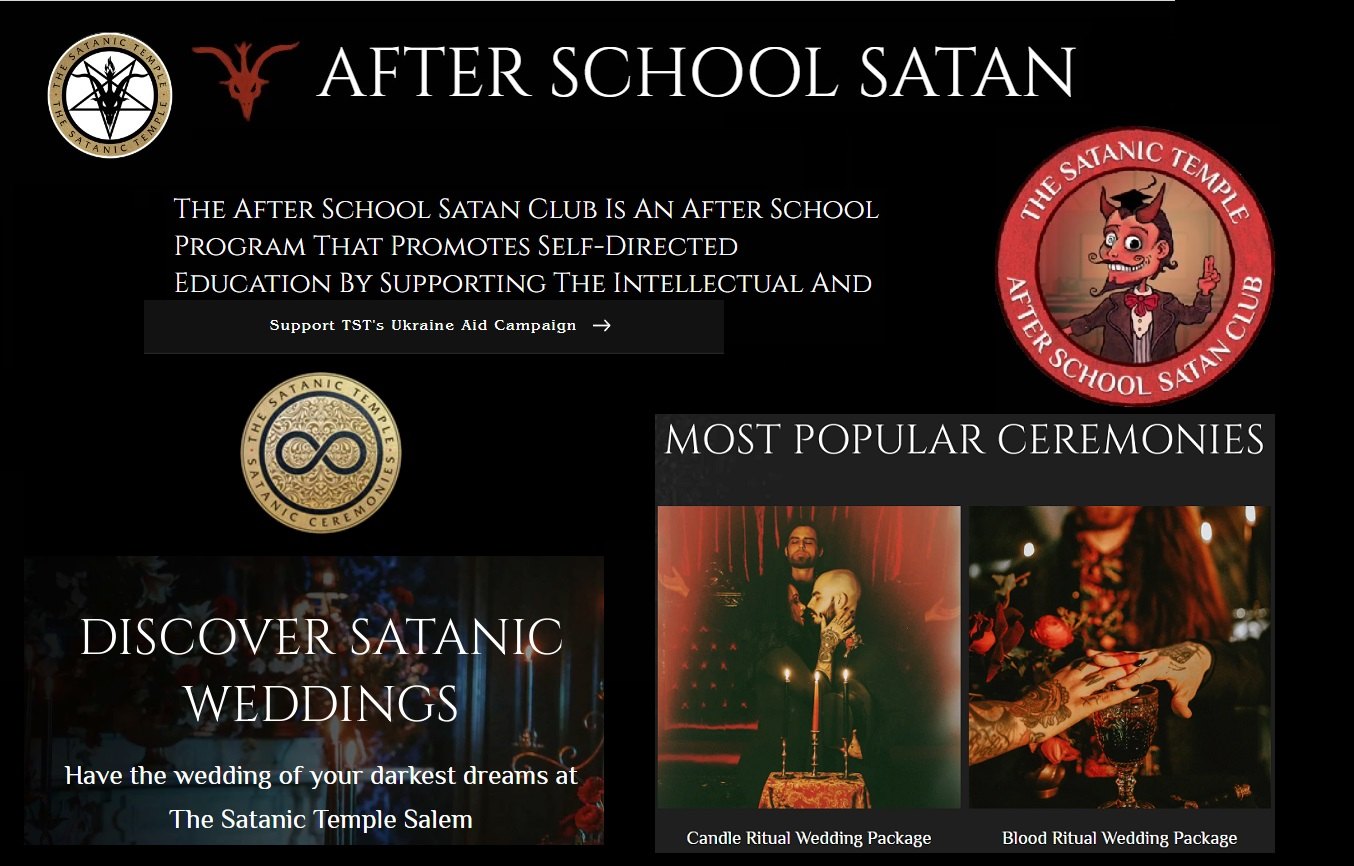 In the article I published yesterday, ALERT! Are You Ready for the Coming Foreign Invasion of the U.S. This Week?, the most comments I have received so far had to do with a single sentence within that article that I added as an aside note:

Coincidentally, Wednesday is the shortest day of the year and the Winter Solstice, a pagan Satanic holiday that pre-dates the Christian Christmas holiday.

Here are two comments I received from readers who were obviously upset about this sentence:

Message Body:
It is cruel and erroneous to state that the Winter Solstice which was universally acknowledged had anything to do with Satan who is only found in the Bible where he was invented as a fictional character. Being a religious zealot ruins the otherwise good information that your organization provides. It points to complete ignorance of what is in your world.

While I agree with much of the analysis…

JUST STOP with the “Satanic” nonsense about the Winter Solstice, and your paranoia about “pre-Christian” “pagan” stuff. PLEASE. Don’t be an idiot.

I was somewhat surprised by these comments, because I just assumed that it was common knowledge that the Winter Solstice has been a part of pagan and Satanic rituals for many thousands of years now, celebrated at the same time of the year that Christians celebrate Christmas, and is certainly not something that is disputed or hidden from those who participate in it.

This is directly from The Satanic Temple website under the category “Holidays“: 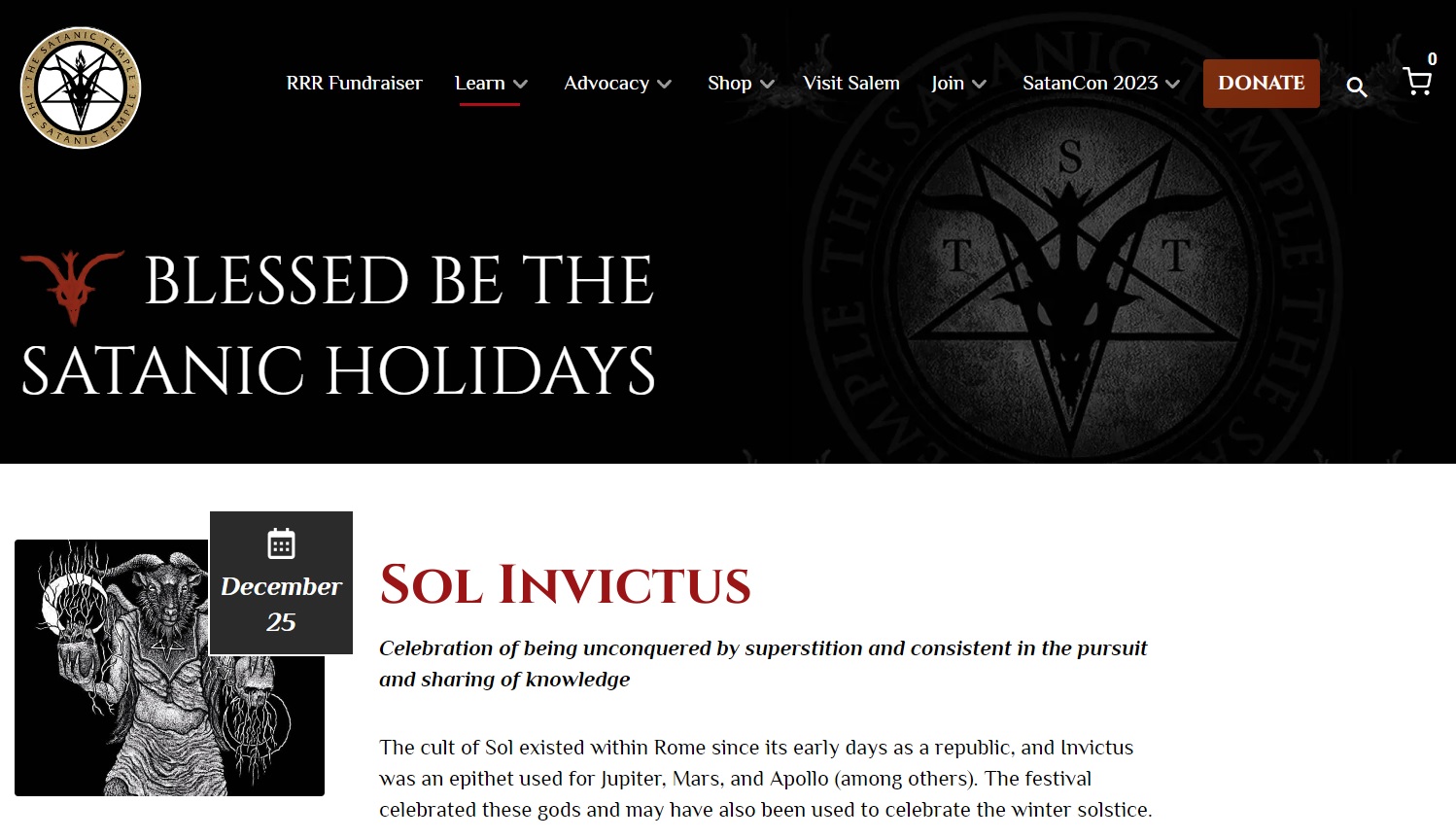 So when Julie writes “It points to complete ignorance of what is in your world,” she is the one who is actually “ignorant” because Satan is promoted everywhere in OUR world.

Earlier this month (December, 2022) parents in the city of Chesapeake, Virginia, drew “national attention” because they were upset that The Satanic Temple was establishing an After School Satan Club (ASSC) for kids at a local public school.

Fox News reported on this:

The city of Chesapeake has recently drawn national attention as the center of a firestorm sweeping the southeastern Virginia community after The Satanic Temple has attempted to establish an After School Satan Club (ASSC) for kids at the local B.M. Williams Primary School.

Aspen Nolette, a local parent and founder of Chesapeake Parents for Freedom, said the ASSC has caused an “uproar” in her community and that parents are increasingly wearied by what is going on in public schools.

“People are extremely upset, they’re extremely disturbed, I think,” Nolette told Fox News Digital. “In the nation right now, you’ve got boys attempting to go into girls’ bathrooms. You saw what happened in Loudoun County, Virginia, and the assault that happened there because of that. You’ve got pornographic books and graphic novels in our schools that parents are extremely upset about because we have laws about distributing pornography to children.”

“And now you’ve got After School Satan Clubs. From what I’ve seen, and I’ve been involved in this for a couple of years, parents are at their wits’ end,” Nolette added. “The Satan clubs seem to be where they drew the line.”

Representatives of The Satanic Temple, however, claim that they do not teach religion (nor distribute pornography), but that they teach “science, critical thinking, creative arts, and good works for the community.”

The After School Satan Club does not believe in introducing religion into public schools and will only open a club if other religious groups are operating on campus. ASSC exists to provide a safe and inclusive alternative to the religious clubs that use threats of eternal damnation to convert school children to their belief system. Unlike our counterparts, who publicly measure their success in young children’s “professions of faith,” the After School Satan Club program focuses on science, critical thinking, creative arts, and good works for the community. While engaged in all of these activities, we want clubgoers to have a good time.

When a similar controversy over the Satan After School Programs was happening earlier this year at a public school in Illinois, Tucker Carlson had one of the Satanic Temple representatives on his show. Watch this 4-minute clip:

I don’t know what you think after watching this clip, but I think Tucker Carlson acted like a first class jerk.

From the expressions on his face, to his insulting comments “You know as well as I do….”, to constantly cutting off his “guest” in mid-sentence, I think Lucien Greaves came across as the kinder, more rationale person in this interview.

But more than that, Greaves is correct when it comes to the law! The U.S. Constitution as well as case law gives them just as much legal right to setup clubs in public schools as the Evangelical Christian groups do.

If you don’t want Satanic Clubs in your local school district, then pressure your School Boards to ban ALL religious clubs, including Evangelical clubs, from public schools. Why do you need a “right” to setup your Christian clubs on the property of public schools? Set them up in your churches!

Of course this ignores the larger issue as to why you are handing over your children to be “educated” by the State with their propaganda to begin with.

Once you do that, you’ve already lost your children, at least spiritually and morally, and if you don’t comply with school mandates, you could also lose them physically when the Child Welfare police show up to your door one day to explain why they are not coming home from school, but have been placed into Foster Care where you will now potentially fight for YEARS trying to get them back, if you ever do. 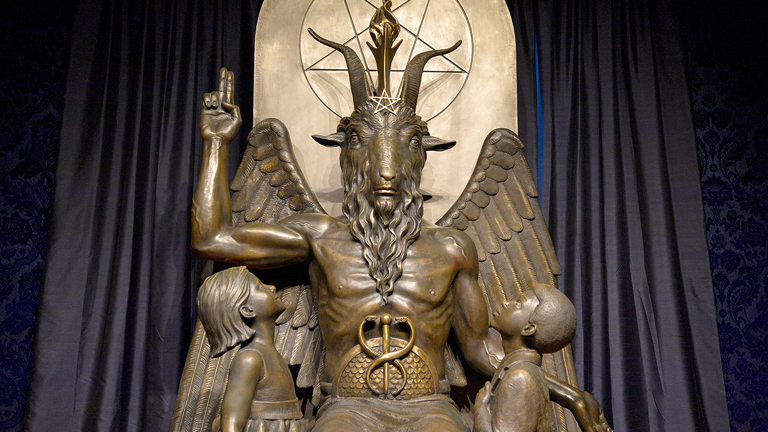 A statue depicting children gazing up at a satanic figure, the Baphomet, in the conversion room at The Satanic Temple in Salem, Massachusetts, on Oct. 8, 2019. Joseph Prezioso/AFP via Getty Images

Even though the Satanic Temple claims they do not teach religion in their after school clubs, at the very least, they are teaching children to respect the name “Satan” as well as all the satanic images that used to be hidden in our culture, but are now brazenly advertised out in the open.

As we have previously published, one place where children have been exposed to Satanism for decades now, is in the hidden messages of the Disney corporation, which was founded by Walt Disney, himself a 33rd degree Freemason. See:

The Sick and Twisted Culture of Disney and ABC

But even Disney now is openly promoting the name “Satan” as well as satanic values. I actually saw this in the Russian media in my newsfeed:

Disney has sparked a Twitstorm after a clip of child actors spelling out “We Love You Satan” went viral.

Twitter users were outraged at the scene from a new show on Disney+, the entertainment giant’s TV streaming service.

The video is a clip of a scene from ‘The Santa Clauses’, a spin-off from the long-running series of comedy films starring Tim Allen — ironically known for his conservative political views — who returns as the reluctant Father Christmas.

The little elves, played by children, scream when Santa points out their spelling mistake, and quickly correct it.

Disney+ Series ‘The Santa Clauses’
“We Love You Satan”👹👇 pic.twitter.com/fkWyjk2LgJ

If this “mistake” had happened while filming, obviously it would not have made the final cut, so this was clearly intentional.

As I have reported numerous times, it doesn’t matter if your own belief system believes in Satan or not. Because the Globalists who control the financial world, politics, and the entertainment industry, clearly do.