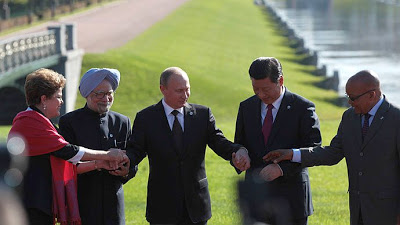 As predicted, massive operations of the Light forces have begun as September started.

The Eastern Alliance sprang into action. The Eastern Alliance is a loose group of BRICS (Brazil, Russia, India, China and South Africa) government officials, Interpol personnel, members of Chinese and Russian military forces, White Dragons Society and Positive Templars who work under indirect guidance of the Resistance Movement to liberate this planet.

BRICS group has announced the creation of a new global bank that will become one of the building blocks of the new financial system: BRICS agree to capitalize development bank at $100bn.

Vladimir Putin, the spokesman of the Eastern Alliance, has made steps to expose the actions of the Cabal to the masses during the current Syria crisis: Putin Puts Obama in Hot Seat: ‘What Will You Do If Rebels Are Ones Using Chemical Weapons?’.

Behind the scenes, negotiations for the surrender of the Cabal continue. Large portions of Jesuit and Rothschild factions have already expressed their theoretical willingness to surrender at The Event.

This is the reason why current Jesuit white Pope Francis puts on a friendly face. He wants to get amnesty for himself and the Catholic Church.

However, the Rockefeller faction (Illuminazi Paperclip Kissinger / Bush / Cheney / Rumsfeld criminal syndicate) does not want to surrender, they want to fight to their bitter end, triggering nuclear World War 3 on their way down. Needless to say, the Light forces will NOT allow that to happen.

Cabal’s military intervention in Syria will not happen according to my intel sources, but the Cabal will continue to push things to the limit. That will only accelerate their exposure to the masses of humanity and speed up their downfall.

Silent war in Pentagon between positive and negative factions continues.

On the positive side, Anonymous is active again: Did Anonymous Penetrate the Military Email System?.

On the other hand, the negative faction is threatening to use nuclear weapons. Again, that will NOT be allowed to happen. Also, the tension between positive and negative factions within the military has caused military personnel to lose faith in the command structure: US deployed nuke force before Syria crisis.

It seems that everybody is against Rockefeller faction now. The Eastern Alliance is gathering global public opinion against them, the Positive Military is preparing to take action. During surrender negotiations, even members of Jesuit and Rothschild factions have expressed willingness to help taking them down. Also, as there is much less negative influence from the etheric plane, they can expect much more disobedience from their mid to low level minions.

According to the Resistance sources, if the Event would happen now, we could expect about 100,000 casualties worldwide as a result of the last minute destruction efforts of the Cabal and their minions before they are taken down and also as a result of the violent dysfunctional behavior of human masses, especially of Monarch mind control victims with their omega programming being triggered. However, that number is not easy to estimate as there are so many factors involved, it could be much lower or higher.

This number is still far too high to tolerate and the Resistance will do everything to decrease it, speeding up the process as much as possible at the same time.

I will post the second part of the planetary situation update next week.

Total victory of the Light is near!