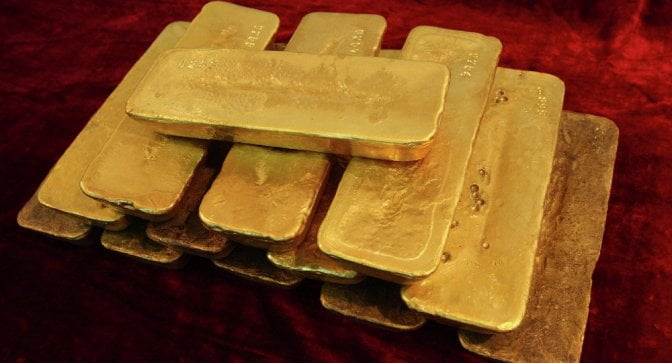 As expected, the BRICS countries led by China and Russia are keeping up with their pressure against the Nazionist Cabal and are still on track on the previously planned systematic depletion of the privately owned Federal Reserve out of its borrowed gold bullion known collectively as the Global Collateral Accounts.

The message has never been clearer. On the eve of China’s Victory Day celebrations, Russia made at least two requests from the global community:

The demand for the relocation of the United Nations comes on the heels of a Palestinian flag flying at the General Assembly, to the consternation of one genocidalist Bibi Netanyahu.

Also, the formal call for the dumping of the US dollar and the massive gold repatriations are adding more injury to the bleeding Rothschild owned HSBC, the world’s largest drug money laundering machine according to Guinness.

HSBC is already asking the ECB for help. The ECB will in turn ask the Federal Reserve for assistance. 😉

Why Are Foreign Countries Repatriating Gold From US Federal Reserve?

Central banks of foreign countries resumed the withdrawal of their gold reserves from the US Federal Reserve, according to the last report by the last Fed reserve.

A massive repatriation of gold began back in the beginning of 2014.

During the period, a total of 250 tons of physical gold have been withdrawn from the Federal Reserve. The gold reserves in the depository dropped to 5,950 tons, a record low for the last 20 years.

Last time, a similar situation occurred ahead of the 2008 financial crisis, and foreign central banks withdrew nearly 400 tons of gold. Taking into account that the current withdrawal has lasted since 2014 and this year has been seeing a new crisis, history is repeating itself, Vesti.ru reports.

The first major attempts by foreign countries to return their gold reserves first began in 2012. At the time, Germany made attempts to withdraw its gold, but was denied examination and received only a small portion of the planned 700 tons.

Amid the ongoing global crisis, trust in the US Federal Reserve is waning. Its geopolitical role has become evident over the last years. Any announcement of the Fed’s intention to raise interest rates provokes destabilization in global financial and commodity markets, the article reads.

In addition, the Fed can bring serious pressure on the financial systems of the Euro area and other European countries, it adds.

Probably, even US allies secretly want to get rid of Fed’s influence and are looking for ways to do that. The recent gold withdrawal may be a step to achieve the goal, the article presumes.

In his open letter to the Commodity Futures Trading Commission, Keith Neumeyer, chairman of First Mining Finance, stressed that the actions of real-world producers and buyers are not determined by financial market operations which are conducted only on paper.

As China boosted its gold reserves to 600 tons, there is no reasonable ground to speak about the low demand for gold. In this situation gold prices should go up, but actually they do not, according to the article.

It turns out that while the market prices indicate that gold is unpromising, real customers continue to buy it in record amounts, it explains.

A leftist Russian MP wants the UN headquarters moved to a neutral country. Addressing the UN Secretary-General, Igor Zotov says the current host – the USA – is using its position to apply leverage against its political opponents.

“The benefits of the public discussion prompted by the initiative to move the UN headquarters are obvious. It will allow nations to get a different view of the UN’s place in the modern world and yet another time raise the question of fundamental problems in this organization and its adapting to modern realities,” Zotov (Fair Russia) writes in his letter, quoted by popular Russian daily Izvestia.

The lawmaker suggested that the decision to move the UN headquarters is made through a broad consensus of representatives of all UN member-countries, various activists and politicians and legal and political experts.

Zotov mentioned that the current placement of the UN offices allows the United States to manipulate the work of the General Assembly through “selective” access of other nations’ politicians to the working meetings of the body.

Deputy head of the State Duma Committee for International Relations, Leonid Kalashnikov, supported the idea, saying the Russian delegation to the UN could initiate the transition of the organization’s headquarters to a neutral country, such as Switzerland.

The initiative was prompted by last week’s scandal in which US authorities issued a delayed and restricted visa to the chair of the Russian upper house, Valentina Matviyenko, who planned to attend an inter-parliamentary conference at UN headquarters and meet UN Secretary-General Ban Ki-moon in New York City. As a result, the entire Russian delegation had to cancel its participation in the event and the meeting between Matviyenko and Ban had to be postponed.

“The visa contains a number of unacceptable restrictions on Valentina Matviyenko’s stay in the United States,” the ministry said, adding that the American actions “constitute a flagrant violation of universally accepted norms of international law and are contrary to the obligations of countries hosting multilateral forums on their territory.”

Matviyenko herself said that Russia was against further confrontation, but noted that Moscow reserved the right to introduce reciprocal visa restrictions against US lawmakers, but such steps must be proportionate and reasoned.