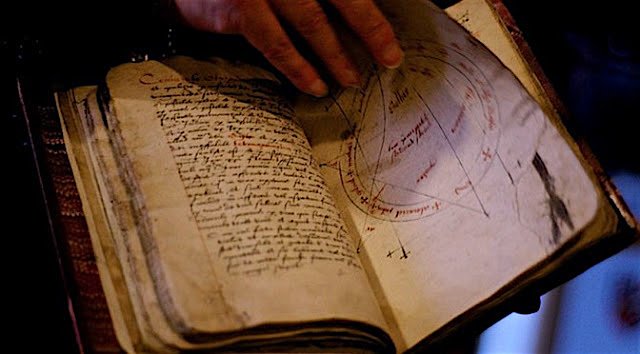 In the famous grimoire Lesser Key Of Solomon, there is a book called Ars Notoria, or ‘The Notory Art Of Solomon’. This portion of the Lesser Key Of Solomon is from the thirteenth century though parts were written as early as the twelfth centuries. It is one of many books over the eras that promised other worldly powers to those that read it.

by Jeff Wilson, The SpiritScience

Many people could not read so the words on the paper were inherently mysterious. The knowledge gained by reading these texts provided otherwise unknown information and could hear the opinions of people long dead.

All of this combined, would definitely color how the masses saw certain books.

In the famous grimoire Lesser Key Of Solomon, there is a book called Ars Notoria, or ‘The Notory Art Of Solomon’. This portion of the Lesser Key Of Solomon is from the thirteenth century though parts were written as early as the twelfth centuries. There were many grimoires and other magical texts of the time, this one was more focused on prayers, meditations, and oral exercises rather than spells, potions and rituals.

The oldest of the texts found in The Lesser Key Of Solomon, it promises a silver tongue, a ‘perfect memory’, and wisdom. As the book has gone through numerous and unauthorized revisions through the ages, it’s hard to quantify its success.  Also, the original texts were written in mash up of ancient Hebrew, Greek, and Latin. King Solomon himself used the original content of Ars Notoria to become as wise, compassionate and clever as he was made to be famous.

Another famous user of the Ars Notoria was John of Morigny, a fourteenth century monk When he tried to achieve academic mastery, he bacema afflisted with demonid visions. He went on to create his own grimoire, Libor Visonum. He believed that the Ars Notoria worked but came at too high a price.

There is a communication trick inside that modern readers will find fascinating. Labeled a ‘magnetick experiment’, details how to use a lodestone and two compass needles to communicate great distances. If the two needles are rubbed against the same lodestone (a lodestone is a natural magnet), the needles will be ‘entangled’.  In this fashion, if one needle moves the other does as well. By placing the needles in the center of a circle of letters and pictures, two individuals across great distances, could talk to each other by spelling out words.

The book has many clever ideas and notions that were ahead of its time. It was also attached to prominent occult and political names.  All this combined with the fact we discussed earlier, that many people can’t read, lead people to believe it had magical properties. The expansion of perspective and attainment of knowledge made others believe that the book itself was magical.

If we were able to get an unabridged and original copy of the book, then my mind could be easily changed.

If the book did have inherently dangerous information, authorities of various types would have worked to contain and limit the public’s access to this information. If you’d like to see an example of the text here is a pretty good translation.

From Humans Are Free