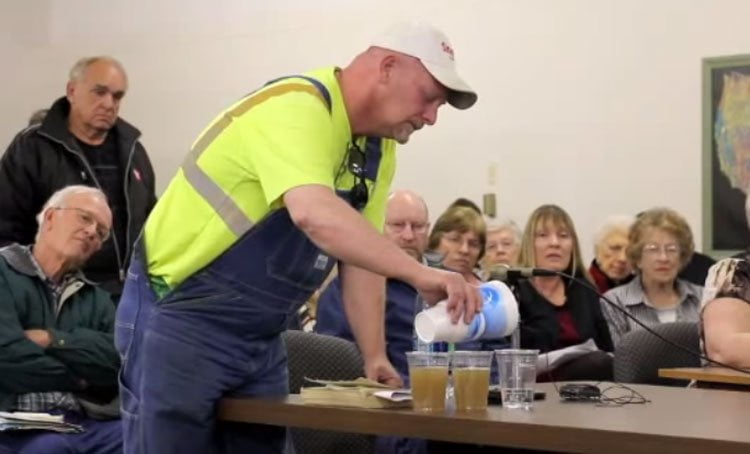 ARJUN WALIA  MAY  31, 2016
Above is a photo (video below) of James Osborne, a farmer from Ainsworth Nebraska who appeared at the Nebraska Oil & Gas Conservation Commission hearing held last year. It was a hearing on out-of-state companies who were to export fracking wastewater into Nebraska, moving 80 truckloads that carry 10,000 barrels per day of pollution to be dumped into a disposal well in Sioux county — effectively transferring all the risk onto Nebraskan farmers and ranchers.

Below is a little more info on fracking, as well as the video, where the oil and gas representatives don’t really have a reply to for the farmer. It’s not the first time something like this has happened, not long ago a lobbyist for Monsanto said it was safe to drink glyphosate, this  is what happened when he was offered some.

Hydraulic fracturing, also known as hydrofracturing or fracking, is another method used by the oil and gas industry to release hydrocarbons from deep below the earth’s surface. To fracture rock formations, companies must drill a vertical shaft into the earth, often penetrating some two or three kilometres.

A horizontal well bore is drilled in an area believed to contain trapped natural gas or oil. Under high pressure, a cocktail of chemicals, water, and sand are pumped into the well. This pressure creates fissures in the shale formation, from which oil and gas can escape.

Despite the dangers and inefficiency of this process, fracking continues. It wreaks havoc on the environment and has also been linked to earthquakes.  In fact, the US Geological Survey recently released findings which directly connected fracking to the dramatic increase of  earthquakes in the United States over the past few years.

According to the study, between 1973 and 2008 there was an average of 21 earthquakes of a magnitude 3 and larger on the Richter scale in the Central and Eastern United States. This increased to 99 M3+ earthquakes per year between 2009 and 2013, and this number is still rising.

According to New Scientist in their article “Fracking operations triggered 100 quakes in a year”:

The new geophysical research, by Won-Young Kim at Columbia University in Palisades, New York, is the latest to suggest that the main risk of earthquakes associated with fracking relates to the way the water used in the operations is disposed of afterwards. In Ohio, the wastewater was injected into a deep well. This raised the pressure of water within the rock and triggered 109 small quakes between January 2011 and February 2012. The largest, on 31 December 2011, had a magnitude of 3.9.

A recent study by a Cornell University-led research team, published in the National Academy of Sciences, also underscored the risks of these operations. The report, which examined 41,000 conventional and unconventional oil and gas wells in Pennsylvania, revealed that many of the oil and gas wells tapping the Marcellus Shale region of Pennsylvania are leaking methane gas, either into the air or into underground sources of drinking water. (source)

A more recent study showed that oil and natural gas fracking uses, on average, more than 28 times the water it did 15 years ago, gulping up to 9.6 million gallons of water per well and putting farming and drinking sources at risk in arid states, especially during drought. Fracking was banned in New York last week due to water pollution and climate concerns.

While the amount of water used for fracking varies widely from well to well, any potential gains from fracking do not outweigh the risk of contaminating underground aquifers and ecosystems by polluting the most crucial resource on the planet. (source)

We published an article last year on fracking that goes into more detail. If you’d like to learn more, you can read that article here.