Prepare For Change
Home Awakening Statism: The Most Dangerous Religion in the World 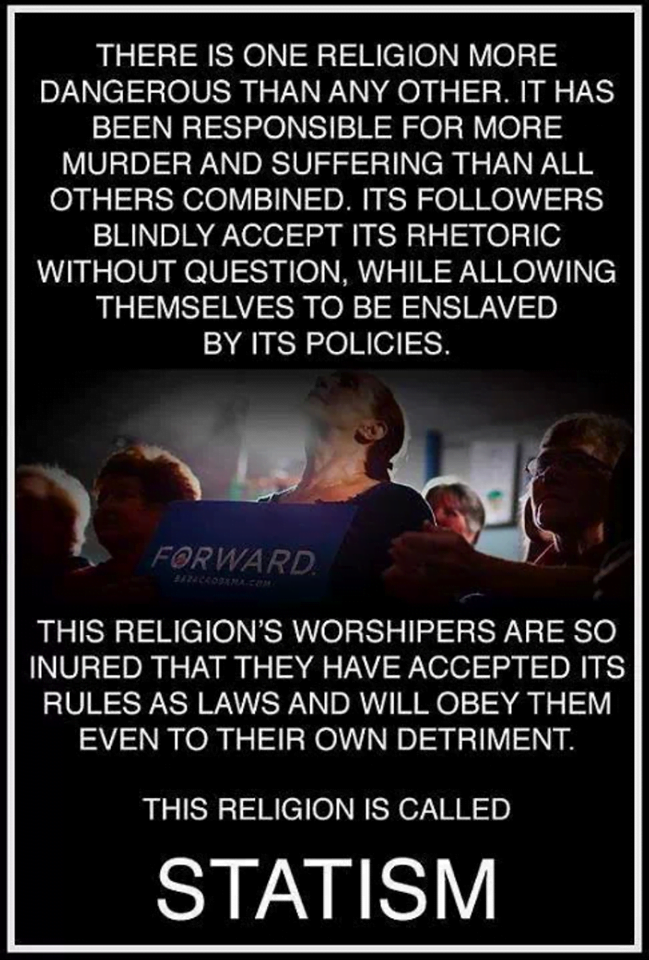 Every religion claims that another one is the most dangerous religion in the world. It’s the world’s biggest blame game. No religion takes it upon themselves to make sure there are no violent elements within their system. They all have radical sects that they for the most part ignore, and rarely condemn. While those radical groups are extremely dangerous, the most dangerous religion in the world isn’t Islam, Christianity, Hinduism, or Buddhism, it’s Statism. Here’s the definition, if you didn’t already know:

statism | noun | stat·ism | \ˈstā-ˌti-zəm\ concentration of economic controls and planning in the hands of a highly centralized government often extending to government ownership of industry.

Statism is the centralization of all government power, and maximum authority over every aspect of individual life. Although, that definition leaves out the cult-like attitude many people have towards their governments. That’s the religious part, the real dangerous part. People that worship the government and all of its violence are most dangerous of all religious people. Those are the people that are willing to kill and die for Nazism, or Communism, or other monolithic governments. That’s what really defines statism, and makes it worse than any other religion.

While religions certainly have plenty of blood on their hands, governments throughout history have killed far more people than all religions combined. An interesting way to compare is this list that ranks world conflicts by death toll. The Muslim conquest of India killed 80 Million people, so +80 Million for Islam, but WW2 killed 85 Million people, so +85 Million for Governments. Then you add in the Holocaust, Stalin’s purges, Mao’s Great Leap Forward, and more and it adds up quickly. Dictators and their different forms of statism have killed more people than any religion could ever lay claim to.

When people are crying out in fear of Islamic terrorism, and attacking that religion for being the most dangerous, don’t let them use that excuse to build a bigger government. The Patriot Act, the NDAA, and other tyrannical laws that take away our rights can all be used against us. Statism is the most dangerous religion in the world, and will kill more people than terrorists ever could.