Prepare For Change
Home The EVENT The Event and then What? – a Picture Review 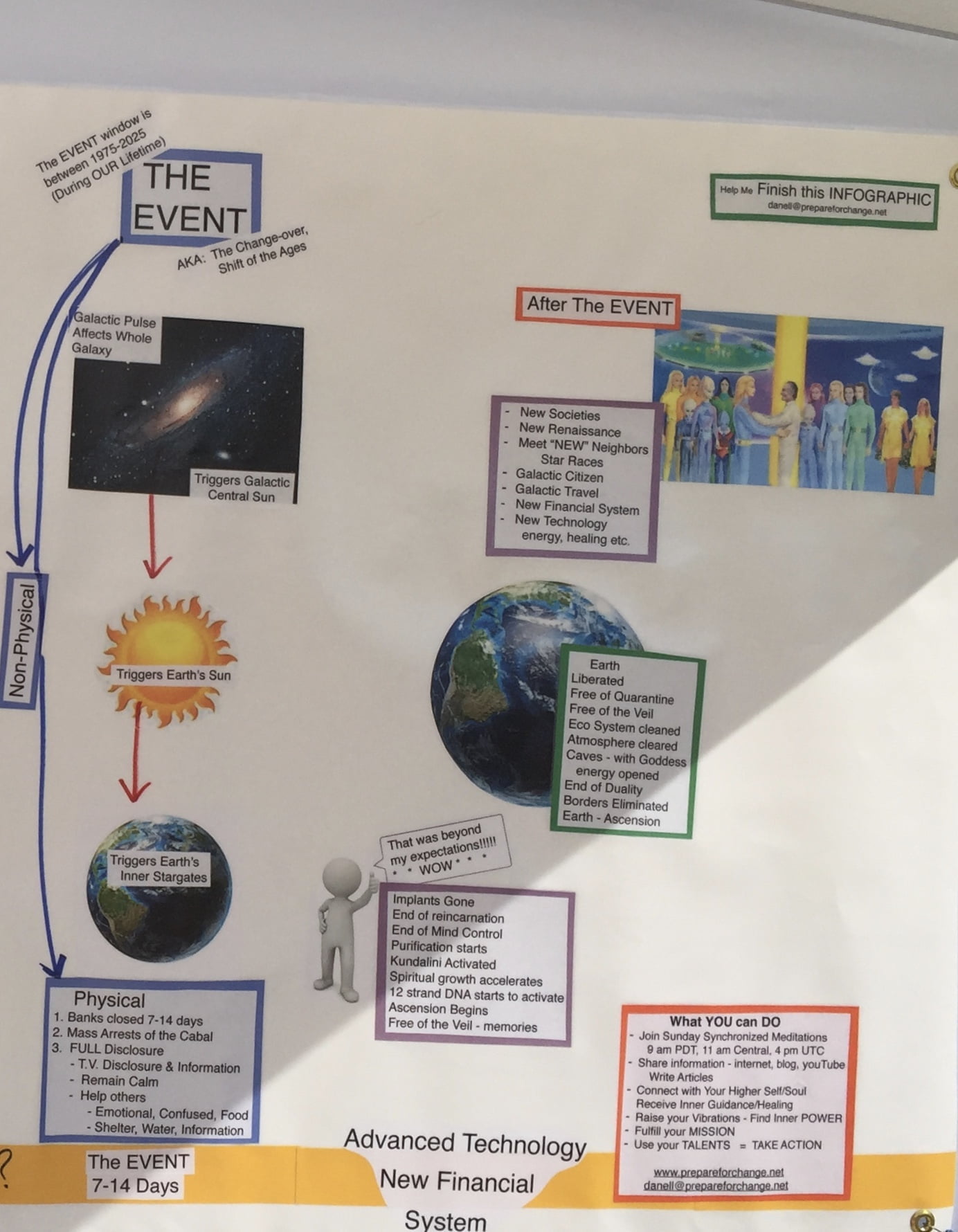 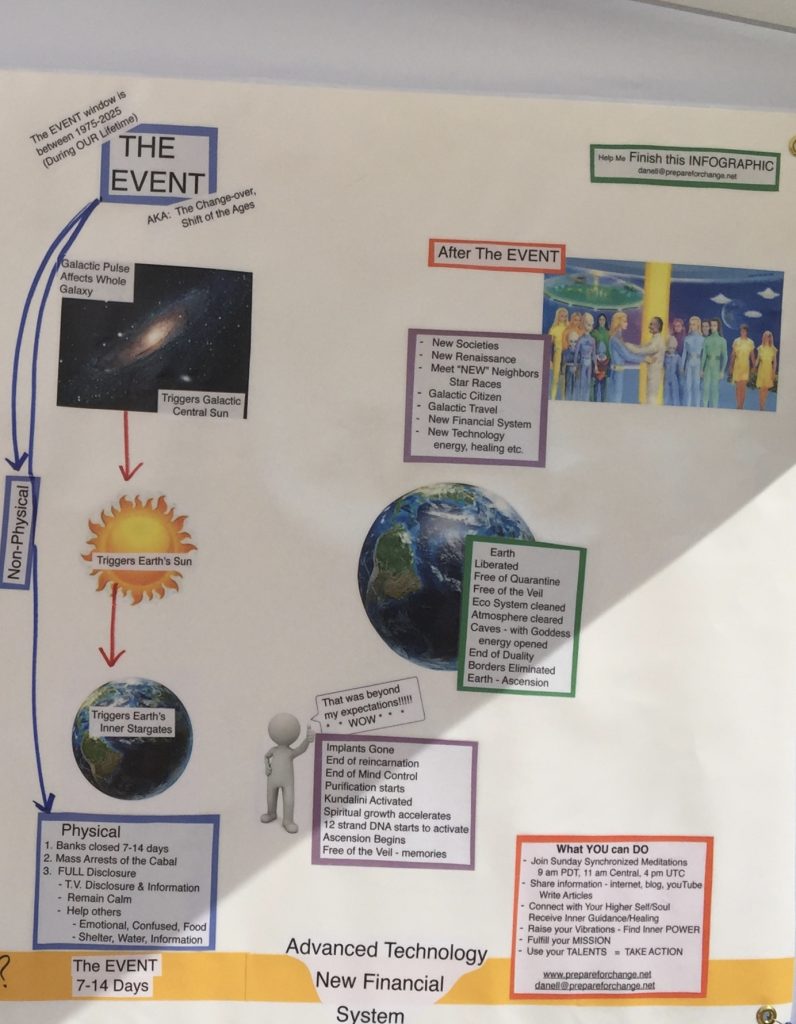 COBRA ON THE EVENT

GF 1116  Steve: David Wilcock talks about a solar event that will make a big change to the DNA of humanity and consciousness to humans. Is this the same event that you are talking about?

Cobra: Yes, exactly. What he talks about, the solar event or what Corey Goode talks about, is actually the galactic pulse triggering the sun. Every twenty-six thousand years there is a galactic pulse which triggers all the stars in the galaxy in a certain way, also of course when this galactic super wave reaches our solar system it will trigger our physical sun, in a way that Corey Goode and other are talking about. It’s part of the Event that I am describing. It is not only the activity of our physical sun but is connected to the activity to the galactic central sun and on the drastic changes on this planet and on the removal of the cabal, reset of the financial system, and the process of full disclosure and everything that is connected with that.

COBRA –  I can now first speak briefly about The Event so you’ll have a basic idea of what is coming forward.  The Event is the final breakthrough of the light forces on this planet and it has many aspects.  It has the physical aspect and it has an energetic aspect.  The energetic aspect being the vibrational breakthrough on the planet because we don’t have just the physical plane, we have the higher energy planes like the etheric plane, the astral plane and there are also controlling factors, controlling beings existing on those planes and controlling humanity spiritually and the light forces are making great progress and there is a certain point there will be an energy breakthrough on the energy planes which will then manifest on the physical plane as the re-set of the financial system.  At the same moment when the reset of the financial system happens, there will be mass arrests of those people who were controlling humanity.  Those people will be taken into custody and will be given fair trial but they will not be allowed to have any access to any positions of power in their life any longer.  (c2c0113)

COBRA – Human beings will still go through an aging process but it will be much easier and there will be technologies that will greatly assist in reversing that. So the Event… it is not the end of everything. It’s not a sudden miraculous shift. It’s the beginning of a process that will result in much better existence for everybody. (wonderful) [pfc 0516-2]

(am0413-conf) q:  Are there only 10 strands of DNA operational?  Cobra:  On the physical level we have 2 strands – that have been manipulated by genetic manipulation.  We have the 12 strands on the etheric plane.  After The Event, things will go fast and the DNA will activate.

(pfc0516)Lynn – What is the purpose of the Cintamani at the time of the Event?

COBRA – Cintamani, each cintimani stone will serve as a lens, as a focal lens for the energies of the compression breakthrough. So when the energy pulse hits the planet that energy will be need to be conducted through a certain conductor or should I say energy super conductor.  Cintamani stones will be energy super conductors at the time of the event.  As this energy network is being quite complete to a certain degree, those energies will be able to flow through the planetary surface quite harmoniously. (pfc0516)

(CK0316)  CARY: Q. So do you Cobra and the Resistance Movement have a plan how to repurpose the banking system & military industrial complex to something that serves the people, or how will that change take place?

COBRA: Oh yes of course there’s a plan, I have spoken about it many times. Basically when the Chimera group is removed and the cabal arrested, actually the Eastern Alliance is already preparing the new financial system, which will be just a transitional financial system. Which will help us go through the transition to the point where the first contact happens. Then advanced technologies will be released to humanity that will assist humanity in going through that change to become part of – copartners in the Galactic Federation. As a sovereign race, I would say, connecting with other sovereign races throughout the Galaxy.

CARY: Very nice. So advanced technologies will be given as we get ready to step up to the plate to that level of being a sovereign race.

[GF 0716] LOUISA- Cobra, you said these are molecular replicators, is that what you mean when you say replicators?

COBRA- These are not just molecular replicators they actually materialize the blueprint for any physical object that manifest the blueprints into the physical plane. [GF 0716]

Lynn – After The Event, will the relationships between men and women improve. Will there be less competition between certain men for a certain woman and will people be able to find more fulfillment in their personal relationships.

COBRA – After The Event, the Archons will be removed and they will not be able to interfere with relationships any more so many of the old conflicts and old drama which is now existing between men and women will simply disappear and true love will be discovered again. Because the way will be removed and the relationships will drastically improve at that point.–pfc0816

Richard – Cobra, after The Event, will we have ways of protecting ourselves physically and mentally from negative forces or will the negative forces be minimized so we don’t have to worry about protection.

COBRA – The negative forces will be absolutely removed after The Event. (thank you)–pfc0816

Richard – Cobra, after The Event, how quickly will medical technologies or healing chambers be available to the general public.

COBRA – As fast as people can integrate those changes and as fast as they can distribute them among each other. And I’m expecting for the healing chambers to be ready, I would say, maybe half a year one year or next ones a few years after The Event. (thank you very much)–pfc0816

pfc1216  Lynn – How long after The Event will the Earth be officially accepted as an official “N3” planet/Galactic society member?  Will that be like a generation or less or?

COBRA – Much sooner than that.  (Much sooner…thank you)

[pfc1116]  Richard – Cobra, will there be a movie that shows the cosmic history from when the quantum anomaly happened up or even just 26,000 years ago until now from the perspective of the light forces?

ga0117  J : How to develop our telepathy in order to have better communication with our star family and ascended beings after event ?

C : After the Event, there will be a lot of energy support from the Galactic Central Sun, and it will be much easier then to develop these telepathic abilities, and the Light forces will give guidance and instructions how to develop that and of course it will take some dedicated time and practice for those to be awakened, it will not just happen by itself. People will still need to dedicate quite much time and effort to develop those, but it will be much easier than it is now.  ga0117

[pfc0616] Lynn – Since most laws and the entire judicial system is going to change after the Event, what will the future for Judges and lawyers around the world look like?

COBRA – They will have to retrain to some other vocation. They will need to do something else.

Lynn – So will there be no legal system?

COBRA – The legal system will be greatly restructured, simplified and there will be no need for judges and lawyers will be drastically reduced. (thank you).[pfc0616]

Closing remarks:   pfcc0117  PFCC：This is the last question. Some people feel that humans can not afford the delay of liberation any longer.  They  want  to  be reassured  of  the  Event  as  well  as  the  full disclosure.  They wonder  if earth  and  humans would transform  into  the ascension  status  before  2026.  Besides,  what  can  we  do  to  make  sure the Event occurs in 2017?

COBRA：If everybody would do their mission 100%, the Event would happen in 2017. I will not give any time estimates apart from that statement.

All these comments were taken from the Cobra Interview FAQ section at: https://prepareforchange.net/cobra-interview-faq/  It is currently being updated and the new updates will be up soon.

What YOU can DO