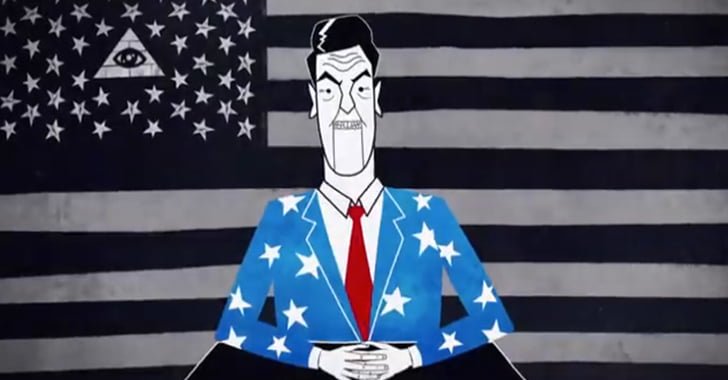 For decades, extreme ideologies on both the left and the right have clashed over the conspiratorial concept of a shadowy secret government often called the New World Order pulling the strings on the world’s heads of state and captains of industry.

The phrase New World Order is largely derided as a sophomoric conspiracy theory entertained by minds that lack the sophistication necessary to understand the nuances of geopolitics. But it turns out the core idea — one of deep and overarching collusion between Wall Street and government with a globalist agenda — is operational in what a number of insiders call the “Deep State.”

In the past couple of years, the term has gained traction across a wide swath of ideologies. Former Republican congressional aide Mike Lofgren says it is the nexus of Wall Street and the national security state — a relationship where elected and unelected figures join forces to consolidate power and serve vested interests. Calling it “the big story of our time,” Lofgren says the deep state represents the failure of our visible constitutional government and the cross-fertilization of corporatism with the globalist war on terror.

Even parts of the judiciary, namely the Foreign Intelligence Surveillance Court, belong to the deep state.

How does the deep state operate?

A complex web of revolving doors between the military-industrial-complex, Wall Street,  and Silicon Valley consolidates the interests of defense contractors, banksters, military campaigns, and both foreign and domestic surveillance intelligence.

According to Mike Lofgren and many other insiders, this is not a conspiracy theory. The deep state hides in plain sight and goes far beyond the military-industrial complex President Dwight D. Eisenhower warned about in his farewell speech over fifty years ago.

While most citizens are at least passively aware of the surveillance state and collusion between the government and the corporate heads of Wall Street, few people are aware of how much the intelligence functions of the government have been outsourced to privatized groups that are not subject to oversight or accountability. According to Lofgren, 70% of our intelligence budget goes to contractors.

Moreover, while Wall Street and the federal government suck money out of the economy, relegating tens of millions of people to food stamps and incarcerating more people than China — a totalitarian state with four times more people than us — the deep state has, since 9/11, built the equivalent of three Pentagons, a bloated state apparatus that keeps defense contractors, intelligence contractors, and privatized non-accountable citizens marching in stride.

After years of serving in Congress, Lofgren’s moment of truth regarding this matter came in 2001. He observed the government appropriating an enormous amount of money that was ostensibly meant to go to Afghanistan but instead went to the Persian Gulf region. This, he says, “disenchanted” him from the groupthink, which he says keeps all of Washington’s minions in lockstep.

Groupthink — an unconscious assimilation of the views of your superiors and peers — also works to keep Silicon Valley funneling technology and information into the federal surveillance state. Lofgren believes the NSA and CIA could not do what they do without Silicon Valley. It has developed a de facto partnership with NSA surveillance activities, as facilitated by a FISA court order.

Now, Lofgren notes, these CEOs want to complain about foreign market share and the damage this collusion has wrought on both the domestic and international reputation of their brands. Under the pretense of pseudo-libertarianism, they helmed a commercial tech sector that is every bit as intrusive as the NSA. Meanwhile, rigging of the DMCA intellectual property laws — so that the government can imprison and fine citizens who jailbreak devices — behooves Wall Street. It’s no surprise that the government has upheld the draconian legislation for 15 years.

It is also unsurprising that the growth of the corporatocracy aids the deep state. The revolving door between government and Wall Street money allows top firms to offer premium jobs to senior government officials and military yes-men. This, says Philip Giraldi, a former counter-terrorism specialist and military intelligence officer for the CIA, explains how the Clintons left the White House nearly broke but soon amassed $100 million. It also explains how former general and CIA Director David Petraeus, who has no experience in finance, became a partner at the KKR private equity firm, and how former Acting CIA Director Michael Morell became Senior Counselor at Beacon Global Strategies.

Wall Street is the ultimate foundation for the deep state because the incredible amount of money it generates can provide these cushy jobs to those in the government after they retire. Nepotism reigns supreme as the revolving door between Wall Street and government facilitates a great deal of our domestic strife:

“Bank bailouts, tax breaks, and resistance to legislation that would regulate Wall Street, political donors, and lobbyists. The senior government officials, ex-generals, and high level intelligence operatives who participate find themselves with multi-million dollar homes in which to spend their retirement years, cushioned by a tidy pile of investments,” said Giraldi.

How did the deep state come to be?

Some say it is the evolutionary hybrid offspring of the military-industrial complex while others say it came into being with the Federal Reserve Act, even before the First World War. At this time, Woodrow Wilson remarked,

“We have come to be one of the worst ruled, one of the most completely controlled and dominated governments in the civilized world, no longer a government by conviction and the vote of the majority, but a government by the opinion and duress of a small group of dominant men.”

This quasi-secret cabal pulling the strings in Washington and much of America’s foreign policy is maintained by a corporatist ideology that thrives on deregulation, outsourcing, deindustrialization, and financialization. American exceptionalism, or the great “Washington Consensus,” yields perpetual war and economic imperialism abroad while consolidating the interests of the oligarchy here at home.

Mike Lofgren says this government within a government operates off tax dollars but is not constrained by the constitution, nor are its machinations derailed by political shifts in the White House. In this world — where the deep state functions with impunity — it doesn’t matter who is president so long as he or she perpetuates the war on terror, which serves this interconnected web of corporate special interests and disingenuous geopolitical objectives.

“As long as appropriations bills get passed on time, promotion lists get confirmed, black (i.e., secret) budgets get rubber stamped, special tax subsidies for certain corporations are approved without controversy, as long as too many awkward questions are not asked, the gears of the hybrid state will mesh noiselessly,” according to Mike Lofgren in an interview with Bill Moyers.

Interestingly, according to Philip Giraldi, the ever-militaristic Turkey has its own deep state, which uses overt criminality to keep the money flowing. By comparison, the U.S. deep state relies on a symbiotic relationship between banksters, lobbyists, and defense contractors, a mutant hybrid that also owns the Fourth Estate and Washington think tanks.

Is there hope for the future?

Perhaps. At present, discord and unrest continues to build. Various groups, establishments, organizations, and portions of the populace from all corners of the political spectrum, including Silicon Valley, Occupy, the Tea Party, Anonymous, WikiLeaks, anarchists and libertarians from both the left and right, the Electronic Frontier Foundation, and whistleblowers like Edward Snowden and others are beginning to vigorously question and reject the labyrinth of power wielded by the deep state.

Can these groups — can we, the people — overcome the divide and conquer tactics used to quell dissent? The future of freedom may depend on it.