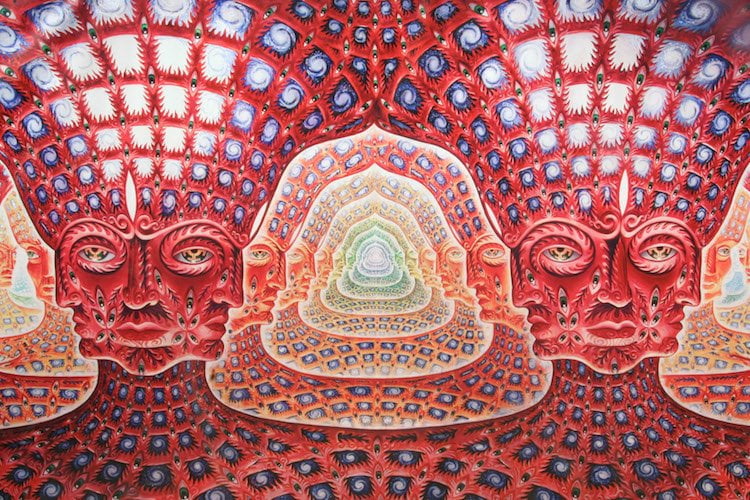 
The overwhelming majority of the universe is: who knows? ~Richard Panek

An accounting of the matter that makes up the universe reveals that some 73% of it is made up of?dark energy, and another 23% is made up of dark matter, neither of which can we see nor understand.?When we look into the heavens, 96% of it is invisible to us.

Furthermore, the human?eye is only capable of seeing around .0035% of the entire spectrum of electromagnetic (EM) radiation. This is that tiny portion we refer to as visible light, yet EM radiation is literally everywhere, existing as radio waves, gamma rays, x-rays and magnetic fields, permeating all things.

As human beings the perception we have of ourselves and our place in the vastness of the universe is severely distorted. Our reality is built upon a very small fraction of the total information surrounding us. We live and function under the power of a tremendous illusion crafted by the senses and the brain, which do their best to give us a functional version of reality from just a small percentage of the entire information available to us.

Long before the scientific method and the advent of technological instruments of scientific measurement, humans intuitively understood that what we are involved in on earth is an elaborate illusion. Through spiritual cultivation we learned that although we believe things are what they appear to be, they actually are not.

In Hinduism, the manufacturing of this illusion is achieved by the deluding power of the consciousness of God, or?Maya. It is the simulated matrix that creates the magic which makes us believe that what we consider to existence is actually real. Maya is the creation of the illusion of the three-dimensional world bound to time and space. It generates the external world, or unreality, while the inner world is replete with deeper meaning, a deeper story, and great mystery.

You do not exist to serve the illusion. The illusion exists to serve you. ~Lauren Zimmerman

Some of us are gifted with the natural ability to see through Maya, but most are not, yet in altered states of consciousness, many more of us can pierce the veil to witness a more holistic version of the universe which incorporates both the natural world and the vastness of the inner world to form a singular, harmonious worldview.

What we see with our eyes is illusion, and what we envision with our mind is reality. This is the difference between sight and vision.

For the record, there is seeing and then there is vision. The process of seeing is often described in clinical terms Seeing is accomplished by visual receptors tethered to the brain. Vision, however, is accomplished within the mind (which resides in the brain) and is aided by intuitive or knowing modalities of consciousness. The Human retains the capacity to have both sight and vision. Vision allows the Human to meet the object, and sight allows the light of the object to meet the Human. This balance in Universe brings equity and harmony to that extraordinary gift of visual perception.~Julian Wash

The great natural shamanic traditions of the world, as well as the psychedelic sciences, are known to induce visions, sending initiates into a virtual reality where the lines between what is real and what is possible are folded together into life-changing moments.

The psychedelic experience completely negates the idea that the mind is in the brain. ~Ralph Abraham

Dimethyltriptamine (DMT), is a chemical compound found in trace amounts in many plants, animals, and within the human body. The substance has been dubbed the spirit molecule because of the effects it has on human consciousness when taken in concentrated form or when ingested within the visionary Amazonian plant medicine, Ayahuasca.

DMT is believed to be created within the pineal gland, the curious symmetrical organ in the center of the brain which has for centuries been considered to be the seat of the soul, by philosophers and spiritual adepts such as?Ren Descartes.

Dr. Rick Strassman, famous for conducting research into the DMT molecule in the 1990s, advanced the theory that a massive release of DMT occurs at the moment of death, or near-death. This burst is thought by Strassman to be responsible for bringing the human soul home to the source of universal consciousness, re-connecting ones soul to the experience of infinite love and absolute peace.

READ:?AYAHUASCA AND IBOGA ? MESSENGERS OF TRUTH FROM MOTHER EARTH

When taken ceremonially as a sacrament to induce a deeper connection to the non-physical realms of life, DMT is unparalleled in its capacity to liberate one from the materialistic assertions about life and human purpose that define our world today. In this way, DMT is the ultimate matrix buster, because it carries the psychonautic voyager to a profoundly ineffable state of mind that swiftly draws one toward the realization that human consciousness is severely restricted in our material world.

It offers a glimpse into the cosmic infinity of the mind and the universe beyond, proving that much more is possible than is permitted in?contemporary consciousness. DMT when taken in its raw form, or ingested within the hallucinogenic brew?Ayahuasca, smashes the veil between ordinary reality and spiritual reality, carrying one into a unique time-space that verifies the multi-dimensionality of the soul by revealing realms of consciousness which lie beyond our waking awareness.

The universe is designed in such a way that matter is never fully destroyed, only broken down into smaller and smaller parts, then reused again and again. We human beings are physically composed of atomic matter which at some point in time provided?the substance of stars and astral matter that preceded us. We live in symbiosis with nature, our cells gathering form from the surrounding elements to provide a vessel for our consciousness, a relationship which still evades scientific explanation.

The connection between matter and consciousness is a point of rigorous discussion amongst philosophers and scientists because this is precisely where the greatest mystery of all time exists. On one side of this connection lies a set of facts and objects that behave in accordance with logical rule sets confirmed by the fives senses. On the other side lies the inexplicably vast ocean of experience that the human mind can bring forth into awareness. DMT is the spiritual science which allows us traverse this gap, a feat left to those with the courage to open their minds to the potential found in the chemistry of consciousness.

Dylan Charles?is a student and teacher of Shaolin Kung Fu, Tai Chi and Qi Gong, a practitioner of Yoga and Taoist arts, and an activist and idealist passionately engaged in the struggle for a more sustainable and just world for future generations. He is the editor of?WakingTimes.com, the proprietor of?OffgridOutpost.com, a grateful father and a man who seeks to enlighten others with the power of inspiring information and action. He may be contacted at?[email protected].

This article (DMT and the Spirit Science of Breaking Through the Illusion of Reality)?was originally created and published by?Waking Times?and is published here under a?Creative Commons?license with attribution to?Dylan Charles?and?WakingTimes.com. It may be re-posted freely with proper attribution, author bio, and this copyright statement.