Prepare For Change
Home Ascension What Was The Harmonic Convergence? 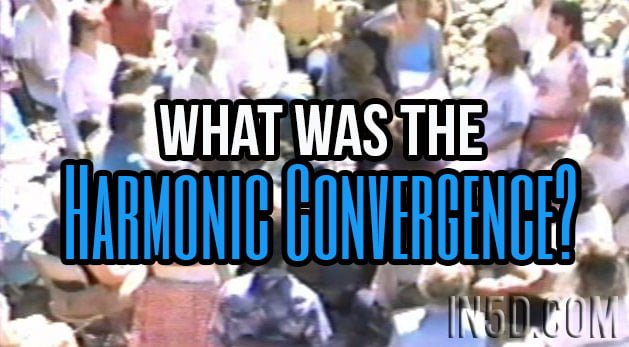 Although many people joined to make the Harmonic Convergence possible, it’s generally associated with the work of Jose Arguelles.

About the Harmonic Convergence

– José Arguelles on the Harmonic Convergence

In 1987 José Arguelles launched a word-of-mouth Harmonic Convergence campaign calling for 144,000 “Sun dancers” to gather near sacred sites at dawn on August 16 and 17 to “open the doors to the final 26 years of the 5,125-year Mayan Great Cycle,” an era of unprecedented change and preparation for a new evolutionary cycle on Earth.

The Harmonic Convergence was celebrated worldwide by tens of thousands if not millions of people and marked the first time human beings simultaneously coordinated their prayers, meditations, and ceremonies at sacred sites around the planet. This was the first manifestation of a networked thrust toward a unified moment of collective synchronization.

Everyone from Shirley MacLaine to Timothy Leary to John Denver celebrated the event. Even talk show host Johnny Carson got his studio audience to OM on behalf of the event. Many people reported significant shifts in consciousness and a reorientation in their life patterns. 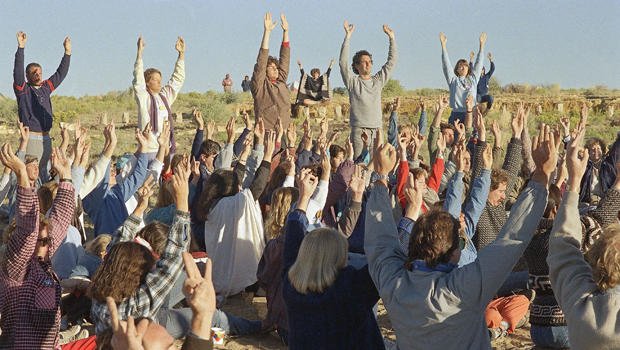 Above: Celebrants raise their hands as the sun rises over the northwestern New Mexico landscape near Chaco Canyon, N.M., Aug. 16, 1987. About a thousand people participated in various activities, part of the “harmonic convergence” including chanting, prayer and meditation. (AP Photo/David Breslauer)

The dates of the Harmonic Convergence were based on prophetic events beginning with Good Friday 1519 when Cortez led the invasion of the Spaniards into Mexico. This day on the Mexican sacred calendar marked the precise end of a 52-year cycle. Since then, nine 52-year cycles had elapsed, coming to a close on August 16, 1987. This also marked the last day of the nine hell cycles as prophesied by Mexican prophet Quetzalcoatl. It was a signal indicating that only twenty-five years remained before the end of the Mayan Great Cycle of History, which occurs on December 21, 2012.

Arguelles believed that the Harmonic Convergence was an event with meaning extending into other dimensions. What was occurring was a prophetic enactment on the third dimension was something that had been previsioned and foretold at a higher level, in another dimension and in another time, by seers whose sole purpose it is to monitor the karmic unfolding of this planet. For more see 2012 Biography of a Time Traveler: the Journey of José Argüelles

In the August 11th, 1987 edition of The New York Times, in the article: “New Era Dawns—or Just a New Day?” José Arguelles was quoted:

“…The vibratory infrastructure holding the Earth together is in a condition of intense fever called resonant dissonance. Influences such as the arms race and insults to the environment could cause the breakup of the Earth into smaller bodies not unlike the Asteroid Belt…This can be averted, by harmonic convergence achieved in a synchronized collective of human beings, through which the possibility of a New Heaven and a New Earth is fully present.”

The following is an interview with Arguelles on July 12, 1987.

Dave Peyton: Good evening, everyone, and welcome to our conference with Dr. José Argüelles of Boulder, Col., who has a controversial message for the world. Dr. Arguelles has captured the attention of many people with his claim that a New Age will begin on Earth in approximately one month. Dr. Arguelles was born in 1939 and spent his early childhood in Mexico. After receiving his PhD in Art History from the University of Chicago, Dr. Arguelles taught at Princeton University, the University of California at Davis and at the Naropa Institute. In 1970 he organized the first Whole Earth Festival in Davis which some say launched the ecology movement. He has studied the Mayan culture for three decades and has written three books including Mandala, Earth Ascending and his latest entitled The Mayan Factor which has become an underground bestseller. Dr. Arguelles is currently a core faculty member and program coordinator of Creative Arts for Union Graduate School and director of the Planetary Art Network, a global association of artists and creative individuals working for “dynamic transformation of the planet.”

DP: Welcome, Dr. Arguelles, to our conference. I’d like to begin the questioning, while others are getting in line for questions, by asking to describe briefly where you obtained your belief that a new age is dawning next month.

JA: This belief comes from a study of the Mayan Calendar which I discovered actually describes the passage of earth and our solar system through a beam 5,125 years in diameter. We entered this beam in 3113 BC and leave the beam in 2012 AD. August 16/17 1987 marks the point in the beam when there is a break in the wave harmonic that this beam represents. The date also corresponds to prophecies concerning the return of the god/hero Quetzalcoatl/Kukulkan as well as various other inter-tribal prophecies calling for 144,000 awakened sun dancers to dance the new age into being. …

Audience Question #6, Mike Jones: Good Evening. Dr., you mention that 144,000 people will be “chosen” to start this new age. Will all of these people know that they have been chosen, and if so, by what means?

JA: The 144,000 people are self-selected. No one is keeping tabs. The point is to create a planetary field of trust. These 144,000 will form a planetary human-to-human power grid that will ground the new frequencies coming in at that time. They will catalyze these frequencies by remaining in their integrity. Their power will be equal to the square of their number 20,736,000,000! Through them and those attuned to them, there will be an awakening kind of experience that will catalyze a positive vision of our common destiny into being. The World will be different as a result. And everybody will know it.

MJ: I certainly hope you are right. Thank you.

JA: Yes, in a way it is a new religion: the religion of the Earth, a religion that encompasses all religions and beliefs by shadowing our oneness with the Earth and all of life. A religion galactically-attuned to the new frequencies so that the timeless values of service and compassion for the higher good will be re-established in the hearts of humankind once again.
(The interview continues and can be be read in full here: http://www.lawoftime.org/infobooth/hc24.html.)