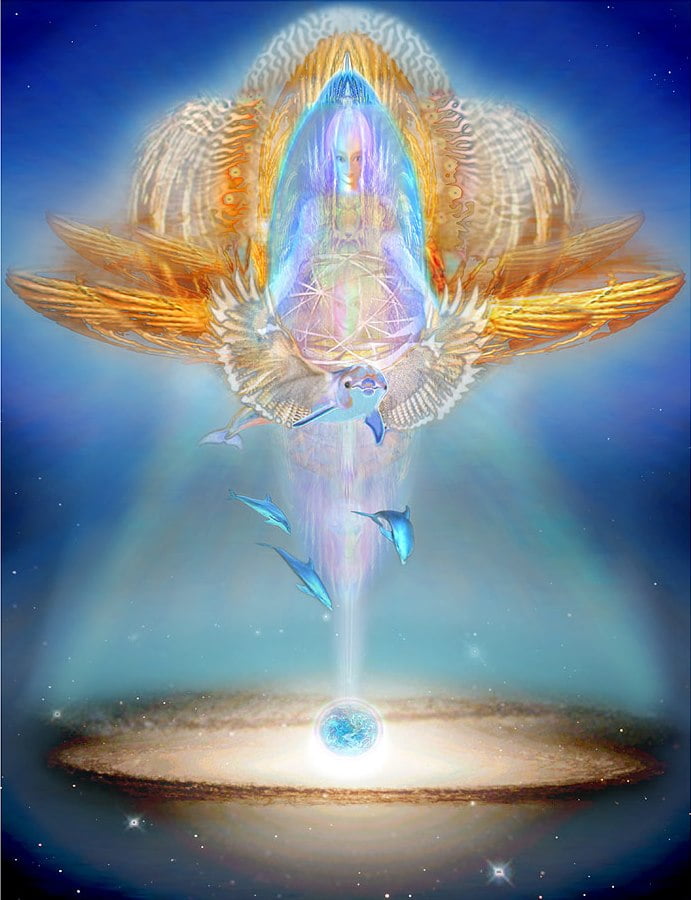 Let’s consider again the graphic below :

As stated before, the four highest planes, plus the 3 highest sub-planes in the mental, are so called spiritual realms of pure Light, where, among other aspects, our spirit (monad, anchor of will) and soul (atma, anchor of love), reside.

The dotted line in the middle of the mental plane is a membrane that divides these higher spiritual planes of pure love and light above it, and the lower planes of so-called personality below it. Remember, the lower the plane, the more dense matter is, and the more anomaly. This membrane is the point where matter densified so much that in everything below that point, there has been enough anomaly that darkness and duality could manifest.

Since everything is first created at the top and then trickles down the planes one by one, we can view the lower planes as a mirror projection of the higher ones, or the lower bodies as the shadow cast by the higher bodies. 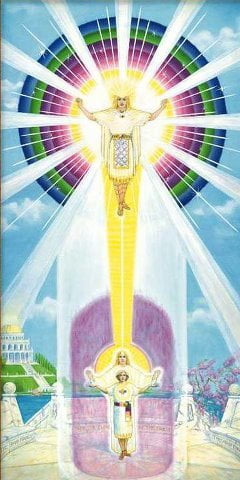 Now let’s imagine the same lay out, but on a horizontal plane, and let’s simplify it, for symbolic purpose.

The 4 higher planes and higher mental planes are who we are, this is the real self. The lower planes of personality, composed of physical, plasma, etheric, astral/emotional, and lower mental, are reflections of the self in a mirror.

The mental membrane (dotted line) is a cloud of mist that stands between the real self and the reflection, blurring the reflection in the mirror.

So we must remember that what we see here of ourselves, our physical bodies with our emotions and thoughts, are only a reflection of our real self, as if cast in a mirror. The mirror is a magic mirror that can retain memories of what has been cast in it, so even when there is a thick fog, the reflection in the mirror remains. Because of this thick fog, we here on the lower planes who are only the reflections, most of the time have forgotten that we are only reflections, and started to believe that we are the self.

As mere reflections who have forgotten the real self, there has often been this feeling of being incomplete, that our identity is not validated, which is coming from losing sight of the real/higher self. And in this forgetfulness, there has been a widespread tendency to look for that sense of completion in the world of reflections. So people hope to be completed and validate their identity by looking for positive opinions of other people, by hoping that positive experiences and achievements will finally validate their identity, and finally the reflection will not be blur anymore. But this is absolutely vain, as completion can never come from the world of reflections, but only from reconnection with one’s own higher, real self.

Seeking completion in the world of reflections is like placing two mirrors in front of each other, the reflections reflect each other endlessly. This world where the higher self has been forgotten is a maze of opposing mirrors where it is not possible to understand what is real.

Therefore, for real spiritual breaktroughs to occur, one must unconditionally renounce all hope for validation and completion in the opinions of other people, in one’s own achievements, or in any other circumstance from this world of reflections in these lower planes. One must clear the clutter of images stored in the memory of the mirror (in the mental, astral, etheric, plasma and physical bodies and their auras), which were created by experiences and circumstances in these lower planes ; in other words, de-identify with the personality, with the reflections, with the physical emotional and lower mental worlds.

And in that clearer perspective, one can seek to finally see again the Light that is sent by the higher self. When the lower self/reflection looks not in the direction of the world of mirrors, but in the direction of the higher/real self, a bridge of Light is established between the self and its reflection that will clear the mists, and the reflection will not be blurred anymore, real completion will occur, as the consciousness and identification will be centered in the real/higher self who will then be in control of everything that happens. This is what is happening both individually and for creation as a whole.