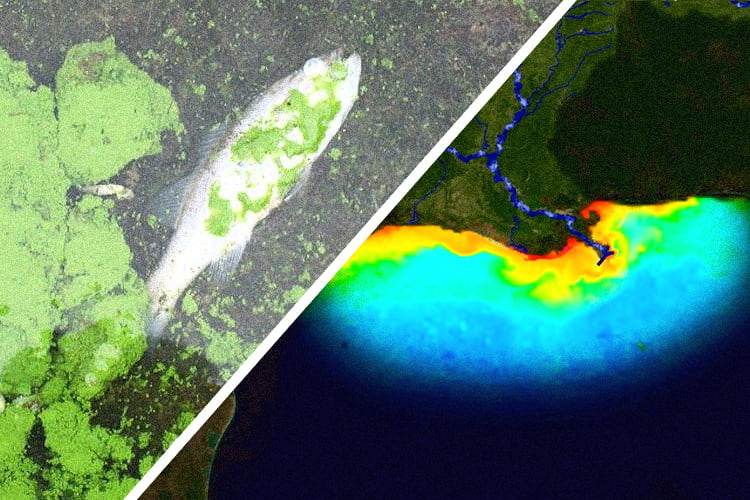 If one is truly concerned about climate change, and wondering where to begin to reverse the damage being done to our planet, a great place to make changes would be the modern industrial farming and agriculture model. In addition to the harm being done by the overuse of pesticides, herbicides, and fungicides, overuse of nitrogen fertilizes and runoff from animal feeding lots is causing a unique ecological disaster.

In the Gulf Mexico, scientists have recently announced they have measured the largest oceanic dead zones ever recorded, just off the coast of Louisiana and Mississippi at the mouth of the Mississippi River. This seasonal dead zone is an area of water where oxygen levels are too low to support life, due to an extreme water pollution.

The major factor in the creation of dead zones is unnaturally increased levels of nitrogen in the water, although other issues related to water pollution do play significant roles, such as: the loss of perennial cover, roads and highways, the construction of artificial drainage systems, and the loss of wetlands.

“Nutrients flowing into streams, rivers and the ocean from agriculture and wastewater stimulate an overgrowth of algae, which then decomposes. This results in hypoxia, or lack of oxygen, in the water, causing marine life either to flee or to die.” [Source]

The following video from CBS Miami reports on this issue, although framing it as an economic issue:

The following presentation offers a simplified look at the issue:

Time for a Return to Organic and Ethical Food Production

So many of the world’s major problems are the result of imbalances introduced into our eco-systems by agricultural and food production systems which have become out of balance, focusing solely on profit rather than properly stewarding the environment.

Florida’s largest lake is slowly being poisoned by the sugar industry, another example of how these ag-systems are ignoring their negative impact on the environment. This is also affecting areas around the Great Lakes, including drinking water supplies in the Midwest.

“The problem is hardly restricted to the Gulf of Mexico. Many other waterways are being choked by agricultural chemicals as well. Lake Erie, for example, is currently reporting a 700-square-mile algal bloom, the toxins from which may also contaminate drinking water. Algal blooms also fill the largest tributary to the Great Lakes, the Maumee River. At present, officials claim microcystin levels (toxins produced by the algae) in intake pipes from Lake Erie are low, but that can change at any time.

In 2014, Toledo, Ohio, was forced to shut off the supply of drinking water to half a million residents for three days due to elevated microcystin levels in the water. The algae also hurt the regional economy each year, as recreational fishing and beach visits must be restricted. Lake Erie began experiencing significant problems in the early 2000s.” [Source]

Confined animal feeding operations contribute to a litany of issues in addition to the inhumane and immoral practices involving the treatment of animals in these environments. These operations even fuel disease and destroy communities, while also causing the destruction of independent farms and forcing small farmers to engage in unethical practices.

One of the reasons so few Americans are aware of these issues is because of “ag-gag” laws, which legally prevents people from filming or photographing conditions on factory farms. Ag-gag laws are being heavily promoted by lobbyists for the meat, egg, and dairy industries to essentially prevent anyone from exposing animal cruelty and food-safety issues at CAFOs.” [Source]

The list goes on and on and the evidence is in. The modern models of agricultural production are suicide, as we destroy the environment in exchange for foods low in nutrition that make us sick. We already know that areturn to organic, small-scale farming can feed the world, and perhaps someday we will make a return to these sustainable methods.