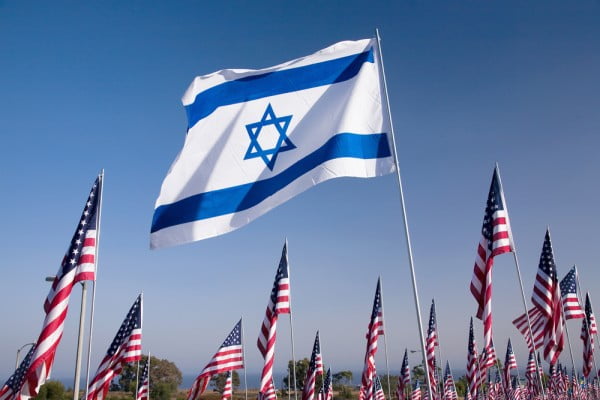 Most Americans have no idea of just how powerful Israeli and Jewish interests are. Two recent stories out of Kansas and Texas illustrate exactly how supporters of Israel in the United States are ready, willing and able to subvert the existing constitutional and legal protections that uphold the right to fair and impartial treatment for all American citizens.

The friends of Israel appear to believe that anyone who is unwilling to do business with Israel or even with the territories that it has illegally occupied should not be allowed to do business in any capacity with federal, state or even local governments. Constitutional guarantees of freedom of association for every American are apparently not valid if one particular highly favored foreign country is involved.

Maryland became the most recent state to jump on the Israel bandwagon last week. Currently twenty-two state legislatures have passed various laws confronting boycotts of Israel because of its human rights abuses, in many cases initiating economic penalties on those organizations and individuals or denying state funds to colleges and universities that allow boycott advocates to operate freely on campus.

When governor of South Carolina, current United Nations Ambassador Nikki Haley, an ardent supporter of Israel, signed the first state law attacking those who support boycotting or sanctioning the Israeli government, the country’s state institutions and its businesses. Haley, who is supposed to be defending American interests, has also stated her priority focus will be opposing “the UN’s…bias against our close ally Israel.”

Both the recent cases in Kansas and Texas involve state mandates regarding Israel. Both states are, one might note, part of the Bible belt. The anti-boycott legislation was sponsored by powerful Christian Zionist constituencies and passed through the respective legislatures with little debate. In Kansas, Esther Koontz, a Mennonite curriculum coach was fired by the State Department of Education as a teacher trainer because she would not certify in writing that she does not boycott Israel. Koontz’s church had passed a resolution in July seeking peace in the Middle East which specifically opposed purchasing products associated with Israel’s “military occupation” of Palestine. With the assistance of the American Civil Liberties Union (ACLU), Koontz is contesting the Kansas government position.

In Dickinson, Texas, in a case which actually made national news, if only briefly, the city is requiring anyone who applies for disaster relief to sign a document that reads “Verification not to Boycott Israel: By executing this Agreement below, the Applicant verifies that the Applicant: (1) does not boycott Israel; and (2) will not boycott Israel during the term of this Agreement.” Dickinson was half destroyed by hurricane Harvey last month and urgently needs assistance, but, in the opinion of Texas lawmakers and local officials, deference to Israel comes first. The ACLU is also contesting the Texas legislation.

The Texas law was signed earlier this year and took effect on September 1st. In January 2016, Governor Greg Abbott met with Israeli Prime Minister Benjamin Netanyahu, who urged Texas to push through the legislation. Abbott responded, and, when signing the bill, commented that “any anti-Israel policy is an ‘anti-Texas policy.’” Abbot is reportedly also considering Israeli endorsed legislation that would ban all business dealings on the part of Texas companies with Iran.

One particular pending piece of federal legislation that is also currently making its way through the Senate would far exceed what is happening at the state level and would set a new standard for deference to Israeli interests on the part of the national government. It would criminalize any U.S. citizen “engaged in interstate or foreign commerce” who supports a boycott of Israel or who even goes about “requesting the furnishing of information” regarding it, with penalties enforced through amendments of two existing laws, the Export Administration Act of 1979 and the Export-Import Act of 1945, that include potential fines of between $250,000 and $1 million and up to 20 years in prison

According to the Jewish Telegraph Agency, the Senate bill was drafted with the assistance of AIPAC. The legislation, which would almost certainly be overturned as unconstitutional if it ever does in fact become law, is particularly dangerous and goes well beyond any previous pro-Israeli legislation as it essentially denies free of expression when the subject is Israel.

The movement that is being particularly targeted by the bills at both the state level and also within the federal government is referred to by its acronym as BDS, which is an acronym for Boycott, Divestment and Sanctions. It is a non-violent reaction to the Israeli military occupation of Palestinian land on the West Bank and the continued building of Jewish-only settlements. BDS has been targeted both by the Israeli government and by the American Israel Public Affairs Committee (AIPAC). The AIPAC website under its lobbying agenda includes the promotion of the Israel Anti-Boycott Act as a top priority.

The Israeli government and its American supporters particularly fear BDS because it has become quite popular, particularly on university campuses, where administrative steps have frequently been taken to suppress it. The denial of free speech on campus when it relates to Israel has sometimes been referred to as the “Palestinian exception.” Nevertheless, the message continues to resonate, due both to its non- violence its and human rights appeal. It challenges Israel’s arbitrary military rule over three million Palestinians on the West Bank who have onerous restrictions placed on nearly every aspect of their daily lives. And its underlying message is that Israel is a rogue state engaging in actions that are widely considered to be both illegal and immoral, which the Israeli government rightly sees as potentially delegitimizing.

It is disheartening to realize that a clear majority of state legislators and congressmen thinks it is perfectly acceptable to deny all Americans the right to free political expression in order to defend an internationally acknowledged illegal occupation being carried out by a foreign country. Those co-sponsoring the bills include Democrats, Republicans, progressives and conservatives. Deference to Israeli interests is bi-partisan and crosses ideological lines. Glenn Greenwald and Ryan Grim, writing at The Intercept, observe that “…the very mention of the word ‘Israel’ causes most members of both parties to quickly snap into line in a show of unanimity that would make the regime of North Korea blush with envy.”

Would that the anti BDS activity were the only examples of pro-Israeli legislation, but there is, unfortunately more. Another bill that might actually have been written by AIPAC is called Senate 722, Countering Iran’s Destabilizing Activities Act of 2017. The bill mandates that “Not later than 180 days after the date of the enactment of this Act, and every 2 years thereafter, the Secretary of State, the Secretary of Defense, the Secretary of the Treasury, and the Director of National Intelligence shall jointly develop and submit to the appropriate congressional committees a strategy for deterring conventional and asymmetric Iranian activities and threats that directly threaten the United States and key allies in the Middle East, North Africa, and beyond.”

Senate bill 722 combined with recent de-certification of Iran by the White House is a formula for war and a gift to Israel. And there’s more. A bill has surfaced in the House of Representatives that will require the United States to “consult” with Israel regarding any prospective arms sales to Arab countries in the Middle East. In other words, Israel will have a say, backed up undoubtedly by Congress and the media, over what the United States does in terms of its weapons sales abroad. The sponsors of the bill, want “closer scrutiny of future military arms sales” to maintain the “qualitative military edge” that Israel currently enjoys.

And there’s still more. The most recent trade bill with Europe, signed by President Barack Obama, includes language requiring the European blocking of “politically motivated” efforts to boycott Israel as a factor in bilateral trade agreements, so U.S. business interests will become subordinated to how foreign governments regard Israel. How does all this play out in practice? A Jewish group in New Jersey is seeking to blacklist with the state pension investment fund a Danish bank that has refused to provide loans to two Israeli defense contractors. The bank has argued that it has turned down loans to many companies in many countries for sound business reasons, but that common sense argument apparently is unacceptable to the NJ State Association of Jewish Federations.

And there’s bill HR 672 Combating European Anti-Semitism Act of 2017, which was passed unanimously by the House of Representatives on June 14th. Yes, “unanimously.” The bill requires the State Department to monitor what European nations and their police forces are doing about anti-Semitism and encourages them to adopt “a uniform definition of anti-Semitism.” That means that criticism of Israel must be considered anti-Semitism and will therefore be a hate crime and prosecutable, a status that is already de facto true in Britain and France. If the Europeans don’t play ball, there is the possibility of still more repercussions in trade negotiations. The bill was co-sponsored by Ileana Ros-Lehtinen from Florida and Nita Lowey of New York, both of whom are Jewish.

There is also a Senate companion bill on offer in the Special Envoy to Monitor and Combat Anti-Semitism Act of 2017. The bill will make the Anti-Semitism Envoy a full American Ambassador and will empower him or her with a full staff and a budget permitting meddling worldwide. There is also a Special Advisor for Holocaust Issues. There are no comparable positions at the State Department specifically monitoring anti-Christian or Muslim activity or for dealing with historic events like the Armenian genocide.

Anyone who thinks that the government in the United States at all levels does not consistently and almost obsessively defer to Israeli and Jewish interests has been asleep. The requirement to sign a document relating to one views of any foreign government to obtain a job or disaster relief is an abomination. Protecting Israel and going on a worldwide search for anti-Semitism or Holocaust deniers are not the responsibility of the American government and they are not what state legislators and congressmen are supposed to be doing to serve the public interest.

Israel is sometimes referred to as the “51st State,” but that is hardly true as it contributes nothing to the United States, collects billions of dollars a year from the U.S. Treasury and is totally unaccountable in terms of the actual damage it does to American interests. The American people are being hoodwinked by their own elected leaders and laws are being passed to make it impossible for them to even complain. Well, enough is enough. It is past time to shut the door on the Israeli influence machine and take back what remains of truly responsive and representational government.

Philip M. Giraldi, Ph.D., is Executive Director of the Council for the National Interest, a 501(c)3 tax deductible educational foundation that seeks a more interests-based U.S. foreign policy in the Middle East. Website is www.councilforthenationalinterest.org, address is P.O. Box 2157, Purcellville VA 20134 and its email is [email protected]

1 thought on “Pandering to Israel Has Got to Stop”