Prepare For Change
Home Nature Climate Change is a Hoax 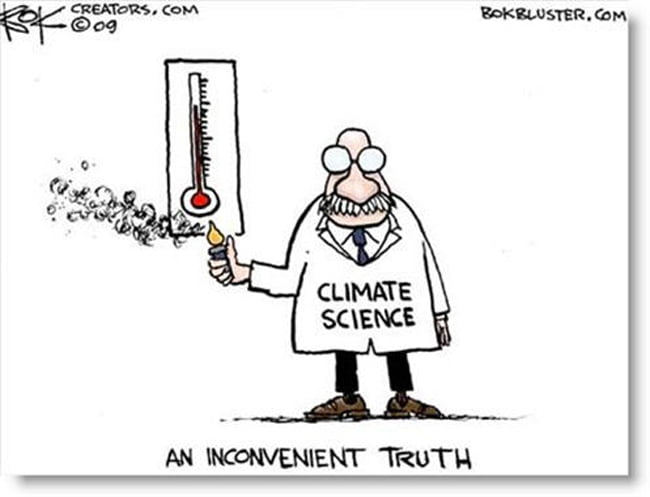 Climate Change/global warming is a Hoax

The idea and creation of the climate change/global warming hoax has been the product of powerful families with evil aims of controlling the world through domination of finance and food production.

They made a simple mistake within the climate model architecture and this mistake changed the results obtained from the models completely. The heat trapped by the increasing levels of carbon dioxide just reroutes to space via water vapour. This whole category of feedbacks was omitted, which greatly exaggerated the calculated sensitivity to carbon dioxide. This one miscalculated fact was enough to skew the results so that they could be used to support the lie of climate change.

The big scare over carbon dioxide and global warming was due to a simple modelling error.

Dr David Evans checked the mapping of the architecture being used by the current climate models and discovered that while the underlying physics was correct, the climate scientists applied it wrongly. Two serious architectural errors were discovered in the basic climate model.

These 2 errors in the architecture were then fixed. The original model was run again and future warming due to carbon dioxide was found to be only 10 or 20% of official estimates. The conventional climate models had been set up to work in a way that amplified the surface warming effect of CO2.

The actual recorded temperatures agree with the new results from the model fixed by Dr. Evans. So we can now be sure that the new model architecture is correct. There is no global warming due to CO2.

The NOAA  study (June 2014) suggests that global warming is still going on because they massaged their data too. NOAA are claiming that their data needed to be corrected in light of the fact that the “Ships collecting temperatures did so first by gathering water either in wooden buckets, in canvas buckets, by thermometers positioned near engine intake valves, and later buoys—resulting in temperature measurements that varied slightly by collection method and requiring correction.”

This is obviously a flawed approach to understanding and working with the figures collected because the problem NOAA have highlighted in the methodology would have actually resulted in the recorded temperatures being higher than reality and not lower as they are suggesting.

Obviously, NOAA have corrected the figures in the wrong direction. Multiplying the mistake instead of rectifying it. Temperature figures subjected to arbitrary corrections can never be trusted as showing reality in any way.

The IPCC are using these amplified results from the faulty climate models and the NOAA faulty study to scare people into accepting their control. They cite the melting of the ice caps with Greenpeace as further proof of climate change but the truth is that they have no idea of the ice thickness before the first satellite took measurements in 1973. They had to rely on information from Russian explorers after they returned from summer trips. No one entered the ice during the winter months. No data exists for the winter months in any way before 1973.

There are scientists and corporations entering into an unholy alliance enabling big business to have the ability to influence opinion-makers on the extreme right of the U.S. political spectrum. Recently we have seen the effect of this influence in health and environmental sciences. The purpose of this alliance has been to deny established scientific knowledge. For example, cigarette smoking causes lung cancer or emission of carbon dioxide is not a major cause of global warming. “Merchants of Doubt” is a serious book written to expose a group of scientists who fought the scientific evidence and spread confusion on many of the most important issues of our time. We can not trust scientists to explain scientific findings with honesty. We must look directly at the scientific facts and check these against the politically influenced rhetoric we are given.

It is the will of big business, bankers and corporations to massage the global warming figures to initiate the control of Carbon Dioxide emissions for the purpose of raising revenue by licensing industrial CO2 emissions. Edmund de Rothschild founded the “World Conservation Bank” in 1987 for the purpose of controlling the CO2 emissions. This was formalised at the 2009 United Nations Climate Change Conference in Copenhagen with the imposition of an international tax of 2% on all financial transactions. This tax would be controlled by the UN and returned to the Rothschild World Bank. The IMF and Rothschild are interconnected  and support for the Rothschild controlled financial agenda comes from all angles.

The wrong understanding of the consequences concerning raised CO2 levels has been taught to us all in the ideas promoted by the media. We have been fooled into thinking that high CO2 levels are somehow dangerous to us and the planet. The reality is that the planet is at its most healthy when CO2 levels are at least 20 times higher (7,000 ppm) than the current levels today (400 ppm).

Plants use CO2 for their health and growth responds dramatically when levels are increased. Higher CO2 levels result in higher yielding and better quality crops in our fields as well as encouraging the better overall health of our planet. Plants fix CO2 from the air and the more CO2 is present in the air, the more plants will fix through photosynthesis. At levels of 350 ppm CO2 plants fix 51,000,000,000 (51 x 109) tonnes. If the levels rise to 650 ppm then plants will fix 64,300,000,000 (64.3 x 109) tonnes per year. This increase of 13.3 billion tonnes of CO2 fixed from the air is completely overlooked by climate scientists. We should think of this as more food for animals to thrive on.

If CO2 levels dropped too low (150 ppm) we would be approaching a total world extinction event. CO2 is not our enemy.

Let us all be sure that the global warming, climate change, polar ice cap melt problem does not exist.

This hoax has been bravely reported by great climate scientists and researchers who still have their personal integrity intact.

Dr Don Easterbrook when he made his presentation to Washington State Senate Committee on Climate Change.

Dr Patrick Moore when he made his presentation to the US Senate Environment and Public Works Subcommittee. in which he also exposes the real agenda of Greenpeace.

Ivar Giaever gave a speech at the Nobel Laureates meeting 1st July 2015 where he explains that the global temperature has been amazingly stable since 1880 and has only increased 0.3% during the last 135 years.

John Casey the US leading expert in climate change also made a presentation of his findings to expose the global warming scandal in which he presents real facts in a real way that makes perfect sense. Particularly when he outlines the political and financial pressures brought down on anyone who tries to tell the truth.

John Coleman makes numerous presentations of the fact that Global Warming is a hoax. He brings 60 years experience of weather prediction as a meteorologist that supports the integrity of the facts he presents.

These people are the top scientists in the field of climate change and global warming. They are all presenting cold hard facts to support their understanding of the hoax and why it is happening.

I think we should listen to what these top experts are saying.

We should understand the climate change hoax for what it really is and make sure the perpetrators of this scam do not get their way and succeed in killing the planet and its people by restricting the release of CO2.

It is impossible for the warming of the air to heat the oceans or the Earth. Carbon Dioxide can’t cause global warming, this is explained by chemistry expert Dr Mark Imisides (Industrial Chemist). He explains how heat is transferred and how much heat is needed to raise the temperature of the ocean. We all know this to be true from our own experiences of life. You can not heat a bath of water by putting an electric fire in the bathroom.

It is the Earths varying distance from the Sun that changes our climate. This is caused by the Milankovitch Cycles. These cycles are responsible for the variations in our climate. The sun is what provides the heat for the earth and nothing else matters. The Earth gets more heat when it is closer to the Sun because of variations in orbit. This happens over a 115,000-year cycle and has nothing to do with CO2.

Full Moon 8 Nov 22: The Death of the Old Paradigm