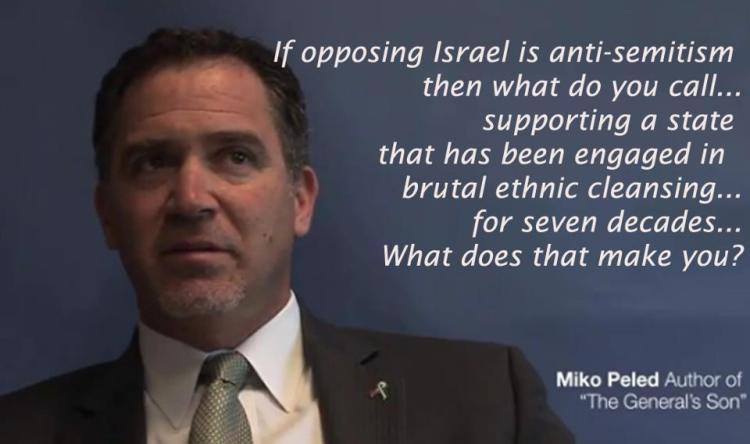 [ Editor’s Note: Dear readers, This is a fabulous start of the year interview by Jonas. His work has been superlative in that too many writers take the commentary only route, and they are now a dime a dozen.

The real work comes in showing what your commentary is based upon. That is how you establish your street cred in internet world. With not professional journalism, Jonas just blew by that by getting out there and doing the work.

And frankly his writing now is better, more solid than the majority of mainstream journalists, as he does not shy away from the red line areas, and VT readers all know what those are… Jim W. Dean ]

Miko Peled is an Israeli-American activist and author of the best-selling book The General’s Son: Journey of an Israeli in Palestine (Charlottesville, VA: Just World Books, 2016). He grew up in a Zionist family. His father fought in the 1948 war and served as a general in the war of 1967. Peled believes that “Israel has been on a mission to destroy the Palestinian people for over six decades.” Peled wrote in the LA Times in 2012:

Alice Walker, author of The Color Purple, writes in the introduction of Peled’s The General’s Son:

“I feel immense relief, and gratitude. Someone must take responsibility for being the grown-ups of our human Universe. There must be people, in all walks of life, who decide: Enough’s enough; there are children here.”

Peled’s next book, Injustice: The Story of the Holy Land Foundation Five, is scheduled to be released next month.

JEA: I have been following your work for quite some time, and you have been a great inspiration to many, including myself. What are the challenges that the Palestinians are actually facing in places like Gaza and the West Bank?

MP: In my opinion the major challenge is that Palestinians are facing an ongoing genocide by a powerful settler colonial state (Israel). Israel has received worldwide legitimacy and recognition and this is very difficult to reverse. In order for Palestinians to gain their rights, their land and their freedom this recognition and legitimization needs to be reversed.

In order to free Palestine the international community will have to get behind a serious campaign of Boycott, Divestment and Sanctions against Israel, to isolate Israel so that like South Africa it can make way for a real democracy with equal rights.

JEA: What is your take on Trump’s Jerusalem decision? Will it actually lead to peace in the Middle East? Do you think Trump actually knows what he is doing?

MP: Trump may or may not know what he is doing, I am sure that he is unaware of the complexity of the issue. It was a poor decision with far reaching consequences which are yet to unfold. What is clear now is that his declaration has emboldened Israel and Palestinians have been paying a heavy price through massive arrests, countless injured and dead by Israeli forces.

The issue of Jerusalem is a uniting factor and Trump’s decision has brought about condemnation by all Arab, Muslim and most European countries.

JEA: Let’s get this clear: what do you make of the anti-Semitism accusation that gets thrown in the media whenever a person criticizes the Israeli policies toward the Palestinians? Back in 2012, I corresponded with Caroline Glick of the Jerusalem Post and I challenged her to provide serious evidence that John J. Mearsheimer of the University of Chicago is an anti-Semite.

Our conversation revolved around a number of issues, but I finally asked her, “If an American criticizes the policies of the United States, does that mean that the person is anti-American?” “NO,” she responded. Then I proceeded to say, “Then how can Mersheimer, who is Jewish, be an anti-Semite when he simply criticizes the incoherent policies of the Israeli government?” To this very day, she never responded to that question. What is really at stake here?

MP: It’s about legitimacy. They cannot allow criticism of Israel for fear that it will lead to the inevitable delegitimization of Israel and Zionism as a whole.

Since there is no legitimate argument to support the existence of Israel and the ongoing persecution of Palestinians by Israel they resort to name calling. Hence the term anti-Semitic is thrown freely.

JEA: I was watching a debate between Alan Dershowitz and Cornel West on this very issue, and I was simply appalled that Dershowitz pulled out the anti-Semitism card on West! In any event, you are an activist and you often travel to Israel. Have you seen some positive changes over the years?

MP: There is no reason to expect positive changes on the ground yet. Israel is powerful and has a blank check from the US and the U.K. Israel had created a reality where it is undefeatable militarily and diplomatically. This is why the BDS movement, which is a grass roots civil society based resistance movement, is gaining ground and that is possibly the only positive change one can point to at this time.

JEA: What responses have you received from the Israel government about your activity? Do you think some officials have read your book? Do they know who you are? Have you been threatened?

MP: There has been no official response or reaction by Israel to my work whatsoever.

JEA: Let’s just hope that people will continue to rise against the genocidal regime in Israel in 2018. Let us also work toward peace. “Blessed are the peacemakers: for they shall be called the children of God.”