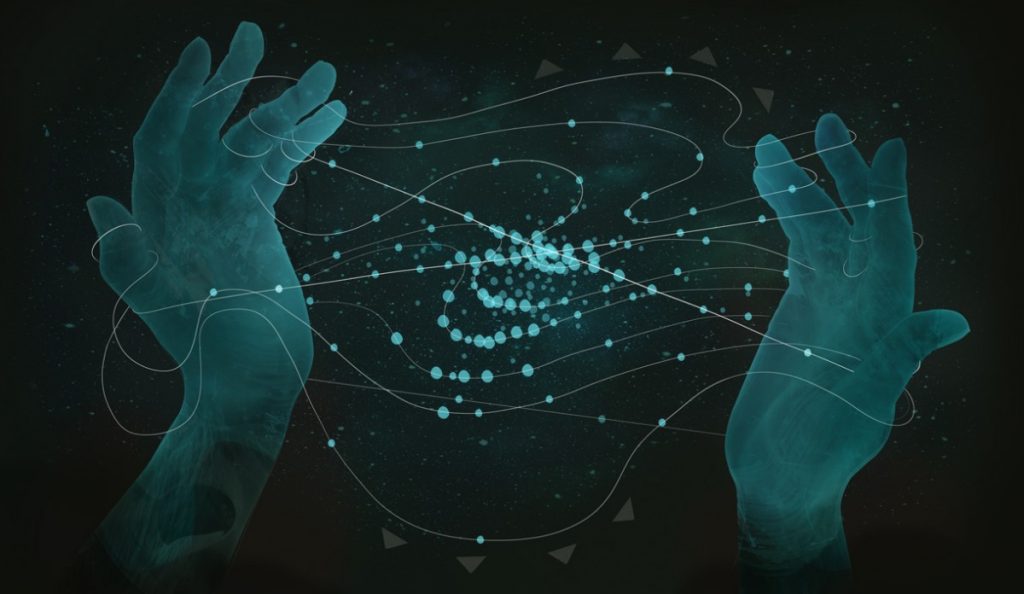 Gravity has a powerful influence not only over inanimate matter but also over biological systems. Plants grow opposite to gravity and animals maintain balance against this ever present force. Balance against gravity is so important, that gait (the degree of side-to-side movement during walking) is a reliable indicator of mental decline in elderly people. But gravity also creates the pressure that slows the biological clock: in space the body grows old much faster. Even bacteria get more virulent in free space.

But surprisingly gravitational changes even regulate our mood. Roller coaster rides are popular because they manipulate the feeling of gravity. During the ride the sense of weight gradually increases, then disappears suddenly, replaced by the feeling of lightness. Gravity is simulated by an upward vertical motion. As the ride reaches its highest point, the contracted feeling of gravity gives way to weightlessness, the sense of expansion. Enjoying this transition is present in infancy. Children the world over enjoy swings and rocking in a cradle—the contracting feeling of gravity replaced by the expanding feeling of weightlessness. Even adults enjoy rocking chairs, free falls during parachute and bungee jumping.

Interaction with the outside world constantly modulates the neuronal connections (called connectome). As a consequence, the mind forms highly symmetric to the physical world. So it should not be surprising that the mind forms emotional connections analogue to the hold of gravity. As gravity constricts the body, it also affects our sense of time by shifting between temporal (emotional) gravity and its lack, negative time. Emotional gravity is a constricted feeling in the mind, whereas negative time is the expanding and energizing surprise of the new, which such an elementary need for living systems. The brainstem is a personal sensor that reacts to the temporal gravity changes of the environment by adjusting the mood. Thus, the attitude of the organism is regulated by the environment.

Although gravitational changes affect the body and the fluctuations of time affect the mind, both generate an emotional roller-coaster. Throughout history and in all cultures, the transitions from emotional gravity (tension) to emotional release (feeling of spaciousness) has been recognized as pleasurable. It is no accident that we simulate this transition in so many ways. Even crying in difficulty or after a tragedy is such a process. This way, the environment intimately regulates our mood by playing on our sense of attachments, i.e., temporal or emotional gravity. Children’s stories from ancient times to the present depict this transition from emotional tension to release. The hero suffers and, the greater his suffering is, the more enjoyable his glorification afterward. Adventure, horror, cliffhangers, and suspense operate on the same principle. We suffer through every averse predicament and emotional tension, and the payoff at the end gives us the emotional release. This is also the secret to the success of the twenty-four-hour news channels.

Therefore the environment intimately regulates our mood by regulating emotional gravity. The child curiously moves forward in a new situation with excitement (this represents the energy of the new) or pulls back in worry or fear (representing temporal gravity, the need for safety). Elegant and ingenious studies in psychology clearly demonstrate the effect of the environment on mood and behavior. Lack of temporal gravity is formed by low-entropy conditions (order, beauty) and produce the feeling of satisfaction, happiness, well-being, relaxation, and the excitement of the new. Interest and the body position are open, trusting. The excited dog smelling around is in search of the new. Enclosed monkeys are willing to pull a lever to take a peek at the outside world: the new.

Although the new is an elementary need, overwhelming and fast-paced information such as flickering light, strongly delineated patterns, or repeating mechanical noises lead to temporal gravity, which provoke stress and increase brain frequencies. The temporal tightness of emotional gravity constricts the mind, forming corresponding emotions, such as anger, negligence, fear, paranoia, running, freezing, and adherence to the past.

Even the language describes fear and guilt as difficult and heavy. This is the reason meditation is such a powerful practice for those who experience stress in their daily lives, which include most people today. If you feel stressed, you should serve yourself some negative time of beauty, joy in order to relax your mind. Even taking a deep breath should expand a constricted soul and mind.

Karma, the Long-Term Consequences of Behavior

According to Einstein, gravity is positive spatial curvature. The brain evolves in interaction with the physical world. For this reason the mental world forms an energy structure that is analogue and symmetric to material systems. This symmetry leads to an inherent understanding, which allows us to move without falling over, or run to catch a falling ball.

The mind forms relationships analogous to gravity. This way society, like the varying curvatures of a planet or star, is made up of different temporal curvature layers, which corresponds to altered sense of time. Within the inner, greater curvature layers a lack of time correspond to a constant search for survival (stress), whereas the outer layers provide the support of the wealth of time. Thus, emotional gravity is a positive curvature temporal field (the ego), because social existence requires a selfish mind.

Without protecting our interests against the real or perceived needs of others, the pressure of advertisements, we would soon find ourselves on the street, begging for survival. Even-though, in hierarchic societies the rigid and impassable separation along class differences largely spares one from the consequences of unwise actions. It also makes advancement nearly impossible of those belonging to lower classes. In some countries such as India, even today, remnants of the cast system may artificially conserve people’s social status throughout life. However, modern democratic societies are highly dynamic, which permits and even facilitates social mobility: the movement between different field curvature layers. Greater temporal curvature (shown toward the center of the concentric circles) is experienced as temporal shortage, or stress. 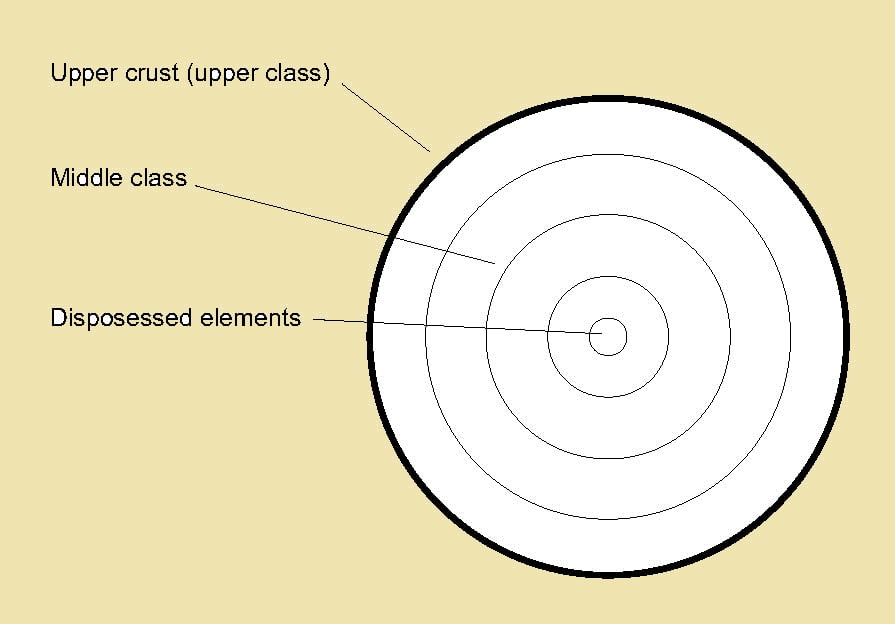 The temporal curvature layers of society

The material world cannot be insulated from gravity and gravity (as well as field curvature) increases toward the center of large objects, whereas gravitational forces are smaller in the micro-gravity environment of the space station. As matter cannot be insulated from gravity, the mind cannot be insulated from the effects of temporal gravity. The conservation of the temporal field leads to field effects, called karma, which accumulate over time. It is not possible to move to another city to erase the bad consequences of cheating, or other selfish actions. Cheating, corruption forms distrust and anxiety in the mind and initiates specific actions, which lead to adverse consequences. Over the long term the positive temporal curvature field encloses the mind by limiting available possibilities, exacerbates our difficulties and making life more difficult. Therefore large emotional gravity causes insecurity, which inhibits social mobility. For example, anxiety (the mental state of guilt and remorse) predisposes lower social status. Negative emotional reactions accumulate field strength, manifested as distrust, enhanced dependence on things and people. These additive effects often reach their peak in the elderly, who are often conservative, less trustful and resist change.

How to create a successful and happy life? The first step is to strive toward emotional stability, because only a calm mind can make good decisions based on a realistic, non-partial view. Positive emotional states are the success generators of the mental universe.

Success feeds on the trust of the world, which is a decency exhibited even when no one is looking. However, no matter how much inner stability we achieve, we must constantly engage with problems faced by society, our social environment. People who work toward the betterment of others and themselves maintain a youthful, active, and dynamic life into old age.

The Science of Karma

Karma is a concept that recognizes a cause and effect relationship between intent, thoughts and actions of an individual (cause) the future of that individual (effect). It is part of major religious beliefs and forms the essence of the just-world hypothesis. Good intent and good deed contribute to good karma and future happiness, while bad intent and bad deed contribute to bad karma and future suffering.

Probably it is not surprising that karma is a scientifically supported principle. This occurs, because actions and even thoughts always have two fold effect. Doing your best is a generosity of effort that tends to earn the respect of colleagues, clients and the social circle of friends. But equally important, diligence and care gives the feeling of satisfaction, contentment that result from a job well done. People who are reliable, good workers are more trusting not only toward themselves, but toward other people also. In contrast, sloppy, careless work degrades trust. People on the receiving side naturally want to keep a distance from those who are not reliable in the quality of their work. But the mind of the careless worker is infected with distrust.

When the carpenter executes inferior, sloppy, negligent work, he will not want to move into the house he built, the tailor will not want to wear the suit he sewed and the shoemaker would not like the shoes he made. The distrust spreads in the mind and infects every aspect of judgment. The maker of inferior work will distrust everyone. He who cheats will be afraid of being cheated. This occurs, because the mind operates in unison, everything is connected with everything else. Happiness makes everything seem easy and carefree; bad news on the other hand overshadows every aspect of the mind with an unhappy tint. For this reason, anxiety, regret and worry are involuntary. For example, individuals with depression may want to stop themselves from ruminating but are often unable to deviate from their negative though patterns. Further, it can be shown that the difficulty to control thoughts is true not only in depressed state, but in any other highly charged emotional state.

Meditation is usually a prime example for controlling one’s thoughts. However, meditation always occurs in a resting mental state, or close to it. Resting state is a neutral state of the mind, which is relatively emotion free, permitting considerable conscious control of thinking. This can be imagined as a ball on a hill. Emotional state represents a tilted ground, where the ball’s path is deterministic. On a flat ground (an emotion free mental state) manipulating the ball movement in either direction is easy and requires little energy. An emotionally charged mind (in energy imbalance), cannot be easily controlled. For example, joyful event, danger, or a sudden significant personal change exerts substantial control over one’s thoughts regardless of personal effort. However, gently encouraging your thoughts toward stability and acceptance via meditation, prayer does reduce stress, it mitigates sadness, anxiety or other disturbances.

1 thought on “THE SCIENCE OF KARMA: CULTIVATING POSITIVE CHANGE AND EMOTIONAL STABILITY FROM WITHIN”