Prepare For Change
Home Allied Light Forces ALLIANCE INSIDER: “There Will be No Civilian Trials for the Illuminati” 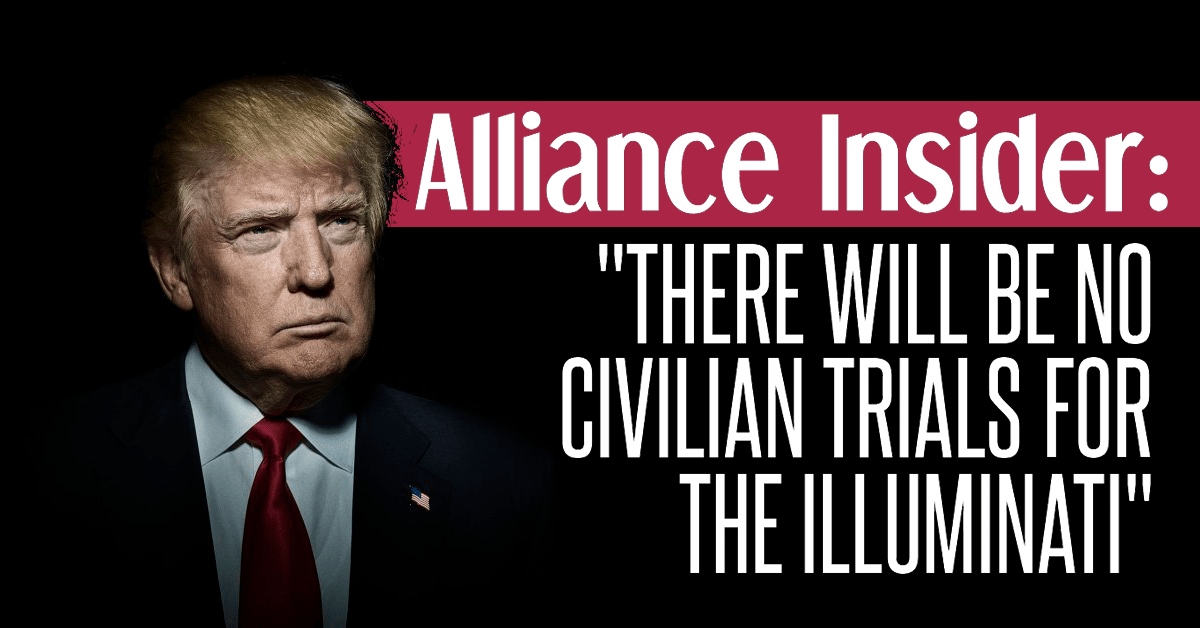 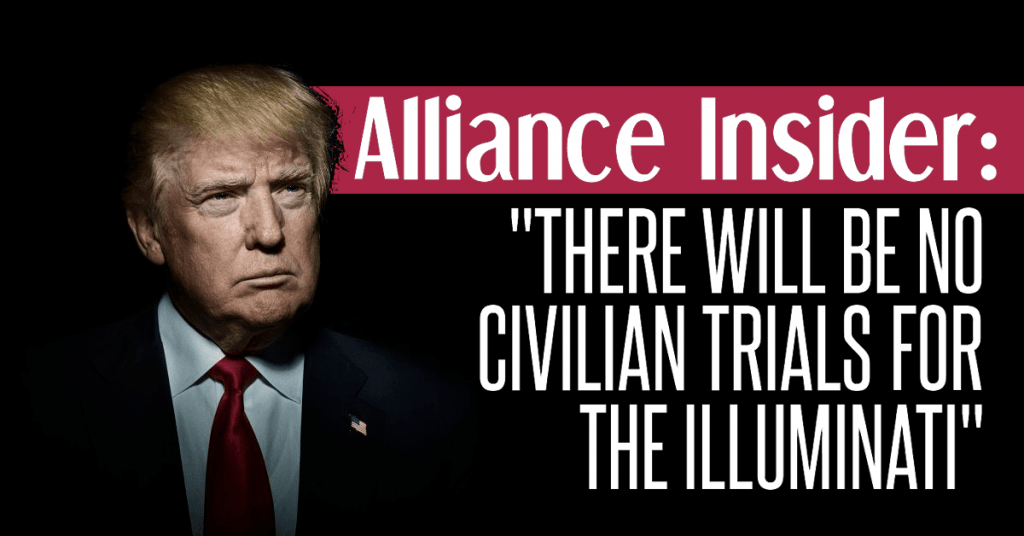 Our source within the Alliance, who we have been calling Arthur, recently updated us on the proceedings of the mass arrests, the recent executive orders signed to pave the wave for military tribunals of the Illuminati, and the expansion of Guantanamo Bay prison to provide maximum security detention of Deep State criminals.


I have been using the pseudonym Arthur based on the legend of King Arthur and the Knights of the Round Table. I’ve done this because of my source’s involvement in the Alliance. I feel that the Round Table, which has no specific leader, is a fitting metaphor for the Alliance because King Arthur’s court was said to be comprised of many prominent warriors.

If this is your first time visiting our site, we have previously shared two other briefings from this source which you can view at the following links:

The following is a transcript of some of the more interesting intel that Arthur shared with us.

“Arthur: There is a lot going on right now. I would guess that nobody but me and maybe 100 people on Earth right now know what’s happening because I’m an I.O.

I’ll just give you a quick scenario and run-down. None of this is on TV and none of this may surface this year. Remember in 2015, I told you we started a military coup?”

“Arthur: Because Obama said bring me 10 aircraft carriers and we’re going to convert them to NATO and the admiral said “go fuck yourself.” They took them back out. That was the beginning of a military coup. It got worse from there as to what Bill and Hillary and Obama got into. It got much much worse. It went downhill to the point where Putin told Trump to run for president. He said to Trump “because Obama is going to put a New World Order with himself and Hillary. So somebody is going to have to take America back or you’re going to lose your country and you’re going to lose your hotels.”

Well it got to the point where Trump got into office and he and his team noticed that there was $7 trillion dollars missing. Obama put us $11 trillion in debt, but Trump couldn’t find $7 trillion of it. They didn’t build any bridges, any airports, no buildings, no pipeline, didn’t build a fucking thing. Well, where’s the $7 trillion? Trump started finding hints and things from the CIA, FBI, Interpol, etc.

Obama was vicious and knew that if he got Hillary got in, everything would be okay. But what Trump did is he put in Blackwater, Seal Teams 2, 4, 6, he also brought in Delta Force, some CIA spoofs, black operative guys, and that’s his security. He doesn’t have the Secret Service. He’s got my guys. Nasty fuckers. They play to win, all the time, every time, every game. They don’t necessarily give a shit as long as the good guys survive and their mission is carried out.

Trump got attacked by the FBI, the Illuminati sent some people in and said “Hey fucker, you’re not the first to take us on. Kennedy tried to shut down the Federal Reserve and take out the U.S. Treasury.”

I don’t know if you ever watched the Jekyll Island documentary by Glen Beck…?”

No, but I read The Creature from Jekyll Island by G. Edward Griffin.

Now if you don’t know the UCNGA Military Law and Tribunal Law, it probably doesn’t mean a thing to you. You might say, “So what? He’s dealing with a national security threat.” With one more signature and without Congress’ approval, he can take us to martial law. Anytime from December 21st 2017 through December 21st 2019. Anytime he wants.

With the national security threat, he froze the assets of about 9,000 people, companies, and corporations. We’re talking about the pedophile rings, the Deep State, the Dark State, the 4,000 companies that Obama bought in Africa with the taxpayers’ $7 trillion. Trump froze all the assets, all the titles worldwide.”

Yeah, I read about that. I have it here in front of me. It’s called the Pursuant to the International Emergency Economic Powers Act signed on December 21st 2017. That’s the exact one you are referring to, right?

“Arthur: That’s it. He signed two more. He signed one on the 23rd and one on the 27th which expanded it, Adam. The reason he is rebuilding GTMO so fast – you know, Disney Land is having power failures, pipes are bursting at LaGuardia, what he’s doing is he is picking people up. The arrests have already begun.”

Well that’s what I suspected. I heard that there were a number of people that they were trying to catch so they created convincing headlines to avoid drawing too much attention. They also caught some people inadvertently by thwarting gun smuggling operations. They grounded flights, they shut things down, but then they had to provide a story that the public would believe to explain away why there was a significant disruption.

I also heard today that they issued an order to expand Guantanamo Bay to house an additional 13,000 inmates with maximum security – and they said it would be for migrants, but let’s get real – there’s now just over 13,000 sealed indictments. Seems like the Alliance is in the final stages of preparation for mass arrests.

“Arthur: This got on your radar, but it didn’t get on anybody else’s. I don’t know if you’ve ever seen Military Tribunal Law, but because of the national security act, there will be no civilian trials for anybody who is a threat to national security.”

Really? So we shouldn’t expect to see public trials for Illuminati?

“Arthur: There will be no civilian trials for the Illuminati. It’s going to be a military tribunal when we get around to it. The general attitude in the Alliance right now is if you’re a threat to national security, we don’t have to give you a civilian trial. And, if he goes to martial law, he can just point his finger and say, “Put that fucker away and I’ll tell you when to bring to the key back.”

When do you think the hammer is coming down on the 13,000 indictments?

They have Hillary on 27 counts of treason. Putin bought the uranium so it didn’t go to North Korea and Pakistan and Afghanistan and on into Iran. We have the data, we have the facts, we have GTMO being built. There’s apt to be a 90-day window where things get tough for the average citizen. There’s a lot cooking.

I don’t know if I ever expressed this to you. The Alliance has a checkmate. Look at who Trump put in office. Five generals and two admirals. I wonder how he’s going to rule… military tribunal. The military will get our country back. It will collapse the Treasury and it will collapse the Federal Reserve.

An order was given to dark ops and special forces teams, if Trump gets sick, these 4,760 people get sick the next fucking day. So the Illuminati, the Bilderbergs, the Trilateral Commission, the Skull and Bones, the G8, all these people live in fear that Trump will cough.”

What I think is really telling right now is if you’re watching any of the turbulence in the markets, you have the Dow plunging 666 points the day the memo was released, the deficit did the same thing back in October, there are so many contrived distractions with their satanic signature on it. Do you know what I mean?

“Arthur: The Dow is nothing more than a piece of used toilet paper that you scoop out of a sewer pipe. It’s speculation, it means nothing. If you have a liar, a pimp, a prostitute, a drug dealer, and a junkie, who’s going to prosecute who? You get it?”

The recent FISA memo, I think, was the final nail in the coffin for the Russiagate narrative, and I’ve heard that there are many more memos soon to come.

“Arthur: Well here’s what’s coming. There’s going to be a truth act that’s going to come through the FCC and you’re going to lose your license if what you print is not evidentiary fact because it’s a threat to national security. Remember how I said most people don’t understand what a military tribunal is?”

If something like this truth act came out during the Obama administration I would be very worried. He tried something similar in late 2016 – the Countering Disinformation and Propaganda Act, I think it was called. But since Trump is pushing for this, I have a strong feeling that they would use it legitimately.

“Arthur: Net Neutrality, that’s all going to get flushed. You’re going to see the internet go to self-regulation. You’re going to see a lot of laws for the criminal shit that goes on, like the Dark Net for instance, and it’s going to be treated just like bank robbery. Our enemies are now are China, North Korea, Saudi Arabia, and Iran.”

There have already been mass arrests in Saudi Arabia of princes and kings, which was exciting to see.

“Arthur: It’s all on the stove right now. It’s all cooking. It’s all boiling. There’s a lot going on, but it’s just like I said before, protect your spirit, shrink your perimeter, prepare for a 90 day window where you can take care of yourself. Withdraw. Don’t expand; withdraw. You can’t teach a mouse to sing, so don’t try to teach some people how to think. Respect what you see. Don’t cloud your perspective by what you want to see. See everything.”

I have a mantra that you’ll appreciate. It’s just something that came to me while I was falling asleep. I’ll tell you what it is first, and then I’ll explain.

“Arthur: You left out something that you’re very knowledgeable about. I would add “intuition” for the universal form of energy. I think of meditation as the mental practice, and intuition as the connection to the higher self.”