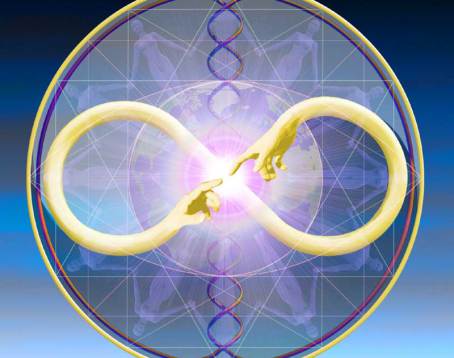 It is so large, that many believe it cannot be fully conceptualized by the human mind no matter how intelligent or advanced the person may be.  In fact, the word infinite is less a word in itself, but rather a negation of another word; Finite.  Finite comes from the latin word Finitus, which means “limited” or “bounded”.  With this in mind, we can now define in-finite, as something that is unlimited, and not bounded.

Any rational number you can think of is finite no matter how big it is.
There are more than 7 billion people in the world right now, but that is a finite amount.
There are trillions of grains of sand on this planet, but that too is a finite amount.
The reason why I decided to write this blog post today is because a few days ago, I figured out a way to understand infinity using potentiality as oppose to a calculable hypothesis.

The way I was able to do this, was simply by pondering exactly how many different things I could do at any given moment.

What I found, is that at any given moment, you can do an INFINITE amount of things.

Here are some examples of the things you can do;
Stand up, sit down, jump, hop on one foot, move your left pinky to the right, move your right pinky to the left, nod, say the word “alchemy”, study alchemy, write a short story, and the list goes on…

One way in which humans have tried to conceptualize infinity, is through mathematics.  There are certain numbers which we call irrational, that have an infinite amount of decimal places, and never resolve.  The most common example of this, is Pi (3.14159….).  I have given the first 5 decimal places here, but as you may know, there is no final decimal place in Pi, for the number goes on forever.

To take my previous argument full circle (pun intended), think about the amount of degrees in a circle.  The diagram to your left is a standard picture of a circle which contains 360 degrees.  If this diagram was on the floor, and you were standing in the center facing 0, there would be a vast array of possible directions you could move.  You could move in the direction to your left, which might be near the 90 degree marking.  You could move backwards, which would fall near the 180 degree marking.  You could move right, which would be right around the 270th degree, and you can also move forward, which is represented by the 0 and 360th degree markers.
If we look at the space between 0, and 10 (the first line), we can assume that in a more detailed drawing, there would be 9 degrees in between.

Even though there are only 360 degrees in a circle, from your perspective in the middle, there are way more than 360 different directions that you can move; for example, if we could zoom in farther, we would find that there is space to move in between the 9th and the 10th degrees.  Even farther, and we would find that there is also space in between 9.1 and 9.2.  Even farther still, and we would observe a space in between 9.15 and 9.16, and so on and so forth.

In this exciting age of scientific and technological innovation, we have finally been able to observe what we believe to be the foundation of matter; SUBATOMIC PARTICLES.

Although we have been observing them for some time now, the properties they possess seem to be baffling to even the most intelligent scientists on the planet.

For instance, some subatomic particles have been found to be in many different places at the same time!  This finding has changed the way that we look at reality, and at this point, due to the amount of times our understanding of reality has changed (paradigm shifts), I am beginning to think that reality is a working model and will never be completely understood.

We are finite beings trying to understand an infinite universe, and being just a small piece of the puzzle, it is nearly impossible to see the whole picture at once, unless you are able to let go of your individual self and realize how intertwined you are with the universe.

Many quantum physicists have postulated that every single thing that has happened, is happening, and will eventually happen, is all happening simultaneously.  Not only that, but also everything that can potentially happen is also happening.

So why don’t you experience all these realities?

Think of yourself as a radio receiver; while all these different waves of possibility are taking place simultaneously, you can only pick up on one such reality.  This is because you are a FINITE EXPRESSION OF AN INFINITE SOURCE.  This infinite source is what exists as all these different possible outcomes.  It has taken human form as you, me, and everyone, in order to experience one reality at a time, but the ego self is just a temporary illusion, because you are not that, but instead are one with the infinite mind which has dreamt us up.

Although infinity is something that may never be fully comprehended, we can still gather enough information about it to understand that it exists.

We can use different methods to gain insight into it, including thinking about potentiality, using mathematical formula, and observing quantum particles.

Some of the greatest thinkers in modern history have been absolutely obsessed with this elusive concept, and in some cases, have obsessed so much that they were driven to insanity.

Infinity can be seen as a divine principle as well, and many mystics of present and past generations have been on a quest for union with the infinite.  Some believed it to be a way of conceptualizing god, and sought to understand it in order to get closer to the source of creation.

So just how big is infinity?

Bigger than you can ever imagine.