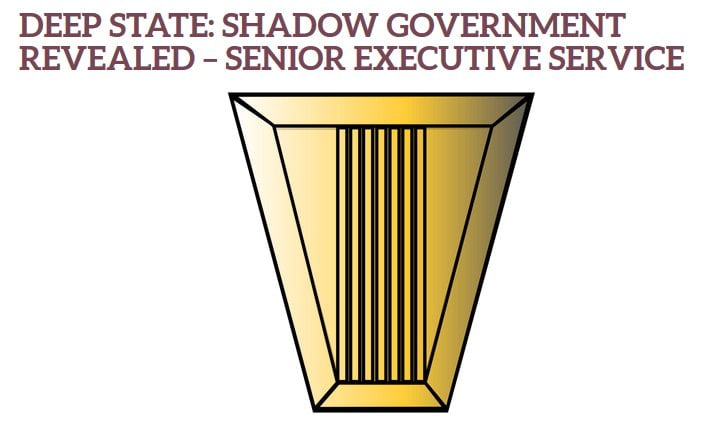 F YOU WOULD LIKE TO HEAR BETSY AND THOMAS DISCUSS THIS TOPIC, PLEASE LISTEN HERE: OBAMA’S SES ARMY FOUND.

Most people know that a new president gets to name over 4,000 political appointees when they are elected. This political cronyism is partisan politics and fills our bloated government with unqualified employees.

Some think that these are the people that comprise the Deep State.

But the Deep State is much deeper than that.

There is a much more sinister system in place that controls Washington D. C.’s bureaucracies through an actual, organized shadow government called the Deep State.

It is the heart of the swamp.

And in this American Intelligence Media citizen intelligence report, we are going to show you exactly who they are and how we can remove them.

The Washington D. C. Deep State is a group of 8,156 appointed mangers in 75 federal agencies that control the executive bureaucracy and tell new political appointees what they can and cannot do. Yes, that’s right, the Deep State is an official government program, well-organized, comprehensive, and “in charge.”

OUT OF THE 8,156 MEMBERS WHO MAKE UP THIS DEEP STATE OF ENSCONCED BUREAUCRATS, OVER 7,000 WERE APPOINTED BY OBAMA.

These the are the “Obama Holdouts” that still control the executive branch of government a full year after Trump has come to office. Obama expanded the existing

program of Deep State managers and appointed over 7,000 of the 8,156 bosses who are called the Senior Executive Service. Some call it the “Shadow Government”, and it is true that this federal cabal works in the shadows.

Have you ever heard of such a group?

Some call it Obama’s Army.

Let’s review what we know about the power of “political appointees” who hold important leadership and policymaking positions.

There are four basic types of appointments:

The Senior Executive Service (SES) in 2016 had 8,156 members who were appointees. Obama appointed over 7,000 of them to these key positions. Most of these appointees do not arise from inside the respective agencies through a merit system and often are not qualified.

It is little known that there are many more SES appointees than any other type of political appointment. The “key bosses” in the federal government’s SES program are not only unqualified cronies, but they are also paid more than the highest government rate of G-15. They can even get bonuses, and each agency can set the salary of each SES member, which has no top range.

THE DEEP STATE – SHADOW GOVERNMENT IS A RECOGNIZED BUREAUCRATIC FUNCTION THAT PAYS THE BEST SALARIES IN FEDERAL WORK.

The Senior Executive Service plays a critical role in every presidential transition, supporting and educating political appointees about how government works, and often temporarily serving in top agency jobs during the lengthy appointee confirmation and onboarding process. The article below describes the transition function of the SES. (at one time this was an active link, but it has been deactivated since we wrote the article)

From the way the State’s Senior Executive Service describes itself on its website and other publications and articles, you wouldn’t know that it is describing a shadow government, unless you looked carefully at what was actually being said and done.

The SES consists of men and women, noncareer and career officials, charged with leading the continuing transformation of government. SES officials are neither excepted nor competitive service appointments. SES appointees typically support officials with the implementation of current administration policies.

IN REALITY, THEY ARE TODAY ENTRENCHED BUREAUCRATIC PERSONNEL WHO DO THE BIDDING OF THE OBAMA-CLINTON REGIME AND THEIR GLOBALIST MASTERS.

The SES was established by the Civil Service Reform Act of 1978 as an Executive Branch personnel system. SES members serve in key positions, just below the top Presidential appointees, and are the major link between senior officials and the rest of the Federal workforce. The two types of SES positions are General, which can be filled by any type of appointment, and Career Reserved, which can be filled only by a career appointment.

The following types of appointments may be made in the SES:

The Senior Executive Service covers most managerial, supervisory, and policy positions in the Executive Branch above grade GS-15, except those that require Senate confirmation. The SES is a system in which salary and career status are personal rather than dependent on the position occupied. There are two main types of SES positions: career-reserved (which must be filled by career appointees) and general (which may be filled by career or non-career appointees, or by limited-term or limited emergency appointees).

There were 8,156 SES members in 2016.  To see the evidence for those facts you can access the government’s official 2016 SES Report at the following site:

To see a thorough description of the general rules and procedures of the Senior Executive Service from the official government website, use the URL below:

To read the government’s official description of the Senior Executive Service, you can access it at this site:

To read a beautiful sales-pitch for the best jobs in the federal government that require no experience, no skills, and yet get the highest pay of anyone, just go to this site:

On page three of the report below, you can see for yourself that the 2016 Senior Executive Services Report lists that there were 8,156 SES members in 75 federal agencies. These “bosses” can’t really be fired because they are in charge. This is a good deal for SES members who are appointed as the all-knowing and all-powerful bosses of agencies they might not have even known existed before they were put in charge of them. And it was a brilliant play for Obama to have left this corruptcracy in place for Hillary’s final overthrow of America, but now which can thwart the attempts of the Trump administration to get anything done.

Don’t be fooled by the lie that SES doesn’t exist in the FBI, DOJ, and State Department. There are “look-alike” senior management systems inside of some federal agencies that fill the exact same purposes and those systems are directly connected to SES. Even the Department of Defense has these Deep State appointees, though they officially claim they do not. You can see the proof that demonstrates their lies below:

Even though these SES key managerial positions are paid the best, you can hardly find a single SES member’s name on any list, anywhere. That’s why they call it the DEEPState. SES is a system of controlling power through secrecy, and acting with complete impunity – and getting a big salary to boot.

The only people’s names you can find associated with these Deep State operatives is through the SES review boards that determine each year what “BONUS” these already over-paid SES bosses will receive. Yes, you heard it right – bonuses, like those Wall Street bankers and brokers who got bonuses after crashing the stock market. Look as you will, you can only find a list of names of the people who give these shadow government managers their bonuses.

Don’t worry, just another Deep State lie to cover up the names of the SES shadow government. But we do have a list of the people who give raises to the SES members in the Department of Justic. Raises for these SES members who don’t exist but are the bosses.

SES Positions That Were Career Reserved During CY 2016

It might seem easy to criticize the Deep State from an armchair geo-political perch, but even Main Stream Media and government agencies have noticed the SES and found fault with its performance and Obama’s huge push to make it work at any cost. In an article entitled, Can the Government Fix Its Corps of Managers? The Senior Executive Service isn’t operating as it was designed to do, from The Atlantic in January of 2016, an objective assessment finds the SES program to be lacking in many ways.

Forty years ago, Congress set out to fix the government’s broken bureaucracy. It worried that the political appointees who head federal agencies didn’t have solid relationships with the civil servants below them. So, it established a new corps of government

workers, called the Senior Executive Service, to be the executive branch’s expert managers, linking appointees to the rank-and-file. But today, a new report finds, the corps isn’t operating the way it’s supposed to be. And officials—from the Obama administration, to members of Congress, to the managers themselves—agree that they still haven’t perfected the art of running the federal government.

When the SES was created in 1978, Congress envisioned it as an “agile corps of generalists” who would “move about the government much in the way that military officers or foreign-service officers move through the military or the diplomatic corps,” said Jim Read, the director of policy and evaluation at the U.S. Merit Systems Protection Board, which produced the December report. They would bridge divisions within agencies and ensure continuity in operations across administrations, but first and foremost, they would be top-flight managers.

The SES, though, has drifted away from its original mission: The “agile corps” is not full of many generalists at all, and the senior executives receive little training to hone their management skills.

Congress hasn’t been blind to the SES’s deficiencies, either. As a 2012 Congressional Research Service report details, reformers have had their eye on the SES for years. The House Veterans’ Affairs Committee, for example, has gone after problems at the SES level at the VA. The government has been trying to reform the civil-service workforce for as long as it has existed. Forty years after its creation, many of the problems the SES was intended to solve persist.

The Deep State is deeper and wider than most people know, and instead of being hidden and secret it seems to be public and filled with well-paid Obama hold-overs. Unqualified, political appointees control the new Presidential appointees and the standard bureaucracy below them.

It is hard to believe, and may leave a person outraged, witnessing the audacity of career government employees and the corruption of the systems politicians have put in place. Deep State cronyism built upon graft and obfuscation fills the Senior Executive Service.

There is no need at all to have this Deep State shadow government, and these political, over-paid management positions should be filled by highly qualified staff through a comprehensive merit system, not appointed by a partisan president.

It is time to pull the plug on the Deep State’s mechanism that creates governmental programs and agencies that make no sense at all, unless these machinations are an attempt to overthrow the government that is supposed to work for We the People.

WE NEED TO TAKE MEASURES TO END THE SENIOR EXECUTIVE SERVICE AND TOPPLE THE DEEP STATE SHADOW GOVERNMENT THAT HAS 8,156 OPERATIVES IN 75 FEDERAL AGENCIES, ALL WORKING FOR POLITICAL GOALS OF BARACK OBAMA AND HIS GLOBALIST MASTERS.

Feel free to share this meme below to your network of truth seekers. Let’s shine a bright light on this shadow government corruption.

The links below has many updates to this original post, including several years of Plum Book listings and tools that the internet researcher can use to uncover the truth about SES.

GETTING TO KNOW THE SHADOW GOVERNMENT

DOJ SES 500 DISCOVERED – THE PAYMASTERS OF THE DEEP STATE