Prepare For Change
Home Awakening How Your Cell Phone Can Make You Unattractive and Ruin Your Relationships:... 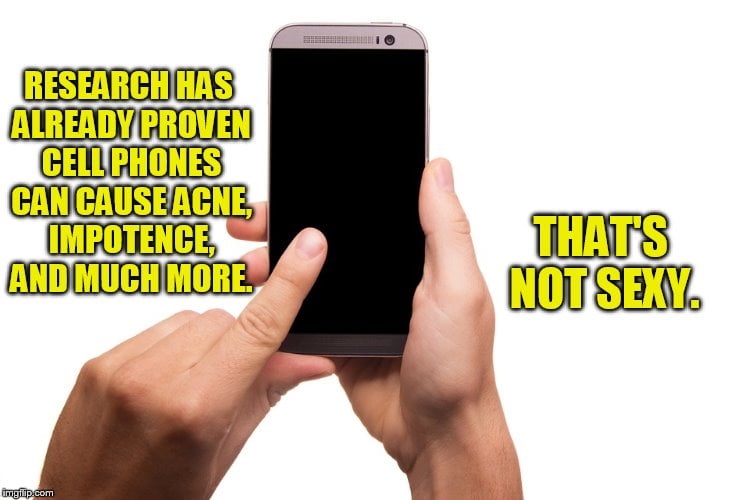 On March 28, Sowetan Live published their article, “Acne, infections: your cellphone could be giving you bad skin.”  The article provides all the juicy details, pun intended.

Since cell phones were found to be 10 times dirtier than a toilet seat, acne and infections aren’t all that surprising since many users hold them close to their faces.

We’ve all heard we’re not supposed to judge a book by its cover.  Many of us do anyway – especially when choosing sexual partners.  This being said, if you’re single, you may want to consider keeping your filthy phone away from your face now.

While we’re discussing physical appearance, there’s also research that proves that exposure to cell phone radiation, wireless WiFi radiation, and electrical pollution (Electrosmog) can cause premature aging.  This is sometimes referred to as “Rapid Aging Syndrome.”  The only people I’ve known who wanted to look older were too young to buy their own booze.

For those who keep their phones and other devices close to their bodies, there’s also research that proves exposure can cause impotence, infertility, and more.  Research has also proven that exposure to cell phone and wireless (WiFi) radiation can worsen pre-existing conditions even if it didn’t cause them. So if you had acne before getting a phone, holding it up to your face is likely to make it worse.

Many sources over the years – including Dr. Oz, CNN, and CBSNews.com – have provided other reasons not to hold cell phones up to our faces.  In 2011, cell phone and wireless WiFi radiation exposure was classified as a “Possible Carcinogen.”

In 2012, research determined that cell phone and wireless radiation exposure can disrupt the blood-brain barrier and cause it to leak.  This can cause a variety of behavioral, emotional, mental, and physical health issues as well.  This includes reduced impulse control and memory impairmentwhich can also be unattractive.

The University of Mary Washington student newspaper offered their thoughts about how cell phones can make people unattractive and ruin relationships:

Cell phones also send out subconscious signals to other people around us. Whether we are walking into a meeting, grabbing food with friends, or just walking around in public, having your cell phone out sends a very strong message that whatever your doing, or whoever you’re with, is just not that important.

Some phone users also suffer from full blown “Digital Addiction” which can be a total turn off unless you can find friends and sexual partners who are equally as addicted as you.

On March 29, The Nation published an article about how we’ve all been misled about the safety of cell phones and other sources of wireless radiation.  It’s definitely worth reading for those who have been on the fence about this.  The whole situation is very similar to those of us who lived through the decades of debates as to whether or not asbestos, tobacco, and Agent Orange were harmful.

We can’t blame young people for not understanding how overusing technology is affecting them and everyone around them.  They have grown up with it in their schools and their homes.  It’s even being promoted by PBS’s Sesame Street.  This is all despite the fact that tech inventors have been sending their children to private low-tech schools and limiting their kids’ access it to it in their own homes.

Even though this stuff is everywhere, there’s still been no “safe” level of cell phone or wireless (WiFi) radiation that has been scientifically determined for children or pregnant women.

In the United States, there is also currently a legislative push for more cell towers and other wireless infrastructure to be installed everywhere – including in front of homes.  Many have expressed concern about this – including Dr. Oz who recently featured a segment about it on his show.

If you aren’t aware of how any of this is tested for safety, it involves plastic mannequin heads and body parts.

Are you feeling played yet?

New technology is great but it’s being overused.  This is creating many problems including behavioral, emotional, and physical unattractiveness.  Sometimes it also causes fires and explosions.  That’s not pretty.

New technology is being overused and this is affecting us all.  It’s especially hard on children, the disabled, the elderly, pets, wildlife and nature.

Many of us who didn’t grow up with so much new technology are watching this happen.  Some of us are also participating.  Every day more people are challenging how much we use it and how much we are willing to be exposed to it.  This includes sexy people like Quarterback Tom Brady and his supermodel wife, Giselle Bundchen.

If all of this hasn’t already affected your attractiveness, there’s a good chance it eventually will.  That’s the breaks.