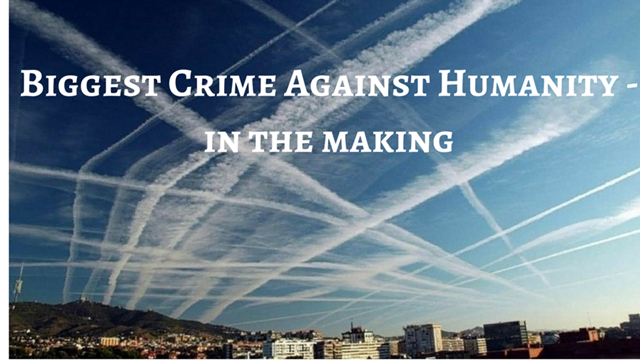 Clyde Lewis puts out shocking information in this excellent talk on chemtrails and geoenginering!   I noticed Chemtrails in 1996 and reported them on my own site at the time and also sent laboratory proof to the DrudgeReport – the biggest website at the time.   I thought Matt Drudge was real because of the information he put out on Monica Lewinsky in the 90s.   Boy that was sure a joke!   He never responded to any of my emails nor reported on Chemtrails as most of you probably realize.   Tweet this information to Trump @potus and @realdonaldtrump and send it everywhere you can to wake up the people!

Clyde puts out much information I wasn’t aware of in this video of a chemtrail conference.   Some of the topics covered are as follows:

Since 1999, sales of Energy Drinks have gone up by over 5000% because people don’t have enough energy!   This is a direct results of the biowarfare agents being sprayed on us!

Chemtrails contain substances which are changing our DNA!  Biowarfare was planned and performed not the American population using Project Naomi and Project Cloverleaf!  It still goes on every day while the fake news says chemtrails don’t exist!  The Chemtrail biowarfare project is classified under national security.

During the early stages of the Chemtrail program they used to run TV commercials with a number to call if you had the flu.  This was done to track the spread of the biowarfare agents the US government was spraying on us!   Tamiflu was developed as an attempt to stop the Chemtrail flu that was making many sick and killing some!

The US government sold Saddam Hussein a bioweapon he used on US troops and this is what gave our soldiers Gulf War Syndrome!

They even tried aerosol vaccinations in 1996 but it only made things worse!

Clyde also covers a lot of information on HAARP and geoengineering and who is behind it.