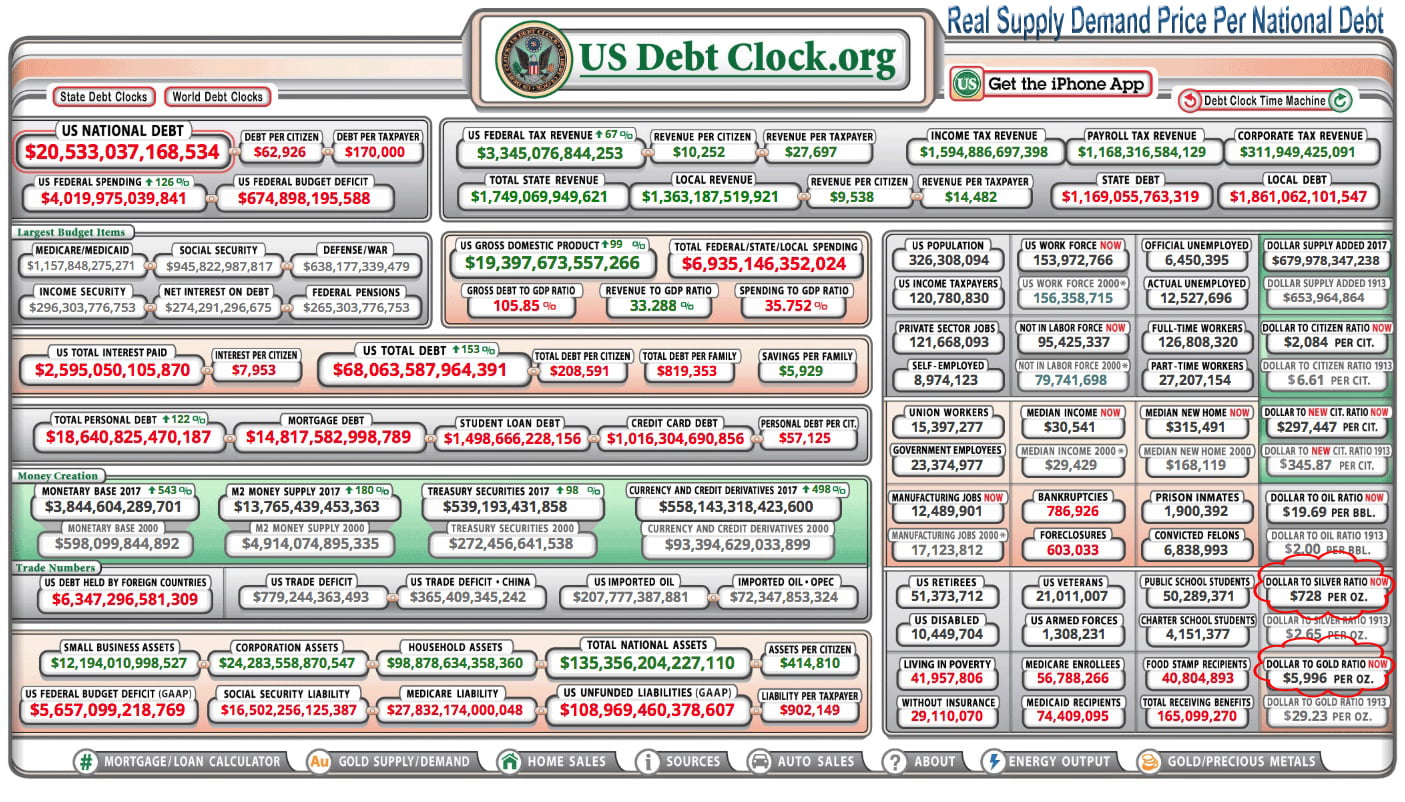 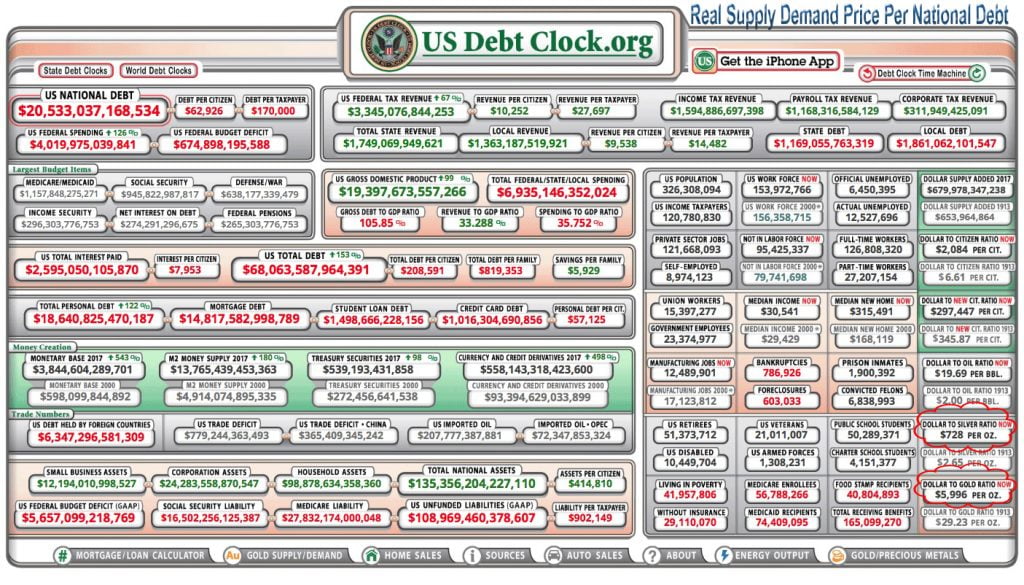 You could wrap $1 bills around the Earth 79,922 times with the debt amount!

That’s equivalent to 5.83 trips to the Moon!

Gold/Silver And The Dollar Devaluation?

1)   Voltaire said over 200 years ago, “Paper money eventually returns to its intrinsic value – zero.”
2)   The value of the U.S. dollar has declined from about 1/40 of an ounce of gold to its current level of about 1/1300 ounce of gold since 1971.
3)   Because central bank and government policies perpetually increase debt and currency in circulation, the value of the dollar inevitably trends toward zero.
4)   The destination of the dollar is clear – to near zero. But the journey is important. Will the path of dollar devaluation be slow and steady or a crash that hyperinflates the dollar currency?
5)   The U.S. dollar is the reserve currency in global trade, but its importance declines every year.
6)   Reserve currency status does not last forever.

*
The value of the dollar has devalued against food, automobiles, and most other commodities and paper assets. Another example of devaluation comes from the tobacco index (a proxy for the cost of cigarettes) as calculated by the St. Louis Federal Reserve:
*

*
The dollar is heading toward zero along with other unbacked debt based currencies. It may take several years or many decades. The specifics and timing of the journey are unclear.
*

*
Dollars are created as debt; they are borrowed into existence by commercial banks and central banks that increase debt and collect interest as revenue. Official national debt has increased exponentially (a straight line on a log scale graph) since 1913. [Only Zionist Banks Are Given Counterfeit USD To Exploit Against The American People aka; Keynesianism]
*

*
Another interpretation of debt comes from FRED, the St. Louis Federal Reserve. The FRED tracks total debt securities, which also have increased exponentially.
*

Everyone wants more dollars to spend, whether they are single mothers, small business owners, corporate managers, state governments, pay-to-play foundations, or national governments.
*
But as more dollars are borrowed into existence, debt increases, and every existing dollar is devalued closer to zero.

[Zionist Keynesian] Bankers understood this before the Federal Reserve was planned at Jekyll Island in Georgia in 1910.
*
They wanted to increase bank profits as they encouraged government and individual debt, collected interest, and gradually squeezed the value out of savings and investments through their inflationary increase of currency in circulation.
*
Why Create The Federal Reserve? Wealth and Power!

Woodrow Wilson Allowed Them Back In:

And Here We Sit:

Devaluing the dollar has transferred wealth to the upper few percent, the financial and political elite. Read David Haggith.
*

*
The Problem:
Dollar devaluation benefits the financial elite. The lower 90% suffer if their savings and retirement are stuck in dollars which do not retain value.
*
The middle class can protect savings and retirement from devaluation if they depend upon hard assets such as gold and silver. You can protect your purchasing power with real money that has been a store of value for thousands of years.
*
But why invest in gold when the U.S. stock market is roaring higher?
*

*
Warren Buffett suggested one million (or more) for the Dow in 100 years – a compound rate of increase of 3.8% per year.
*
Both stocks and gold will be priced much higher as dollars devalue.
Gold would increase to over $2,000,000 in 100 years at a 7.7% compound growth rate, its growth rate since 1971.
*
Official national debt would exceed $100,000 trillion at its current growth rate. A reset is more likely.
*
Consider this graph of gold divided by the Dow since 1971 when President Nixon severed the remaining gold backing for the dollar. Gold and the Dow have risen since 1971 but because the Dow has bubbled to all-time highs and gold remains 33% below its all-time highs, the ratio favors gold in late 2017.
*

*
Central bank “money printing” and [Banks borrowing the fiat USD] outright purchases of stocks [Mostly Japan] have levitated the DOW. [Its A Fiat Bubble to The Demise Of American Public]
*
John Mauldin reported that the list of stocks owned by the Swiss Central Bank is 66 pages long. Amazing!
*
*
“Printing” currencies from “thin air” to buy stocks is an exceptional benefit exercised by the Swiss Central Bank (and others).
*
Russia and China have steadily purchased gold bullion. Russia reports they own 1,779 tons of gold, while China obscures their holdings. However reliable speculation by Alasdair Macleod indicates that China holds in excess of 20,000 tons of gold. Both countries have converted devaluing dollars received from trade into gold, and both appreciate currently inexpensive gold prices.
*
Unfortunately, the American public and institutions prefer digital assets and paper debt while Russia and China have accumulated gold bullion.
*
Repeat: Russia and China have accumulated gold bullion.
*
They understand that dollars will be created by the trillions, and thereby hasten the devaluation toward the dollar’s destination of near zero value. Gold will become increasingly valuable because it is desired by individuals and governments while the supply is small and grows slowly.
*
*
The Journey – Possibilities:

The path the dollar travels on its journey toward zero is important, but gold and silver will become increasingly valuable in all scenarios. A credit crunch may devastate many debt based assets and cause hard assets to spike upward. Hyperinflationary “money printing” will boost gold prices to unheard of numbers as the value of dollars, and most fiat currencies, falls toward zero.
*
[Remember digital assets like debt based bitcoin can only cash out at the established rate of the USD]
*