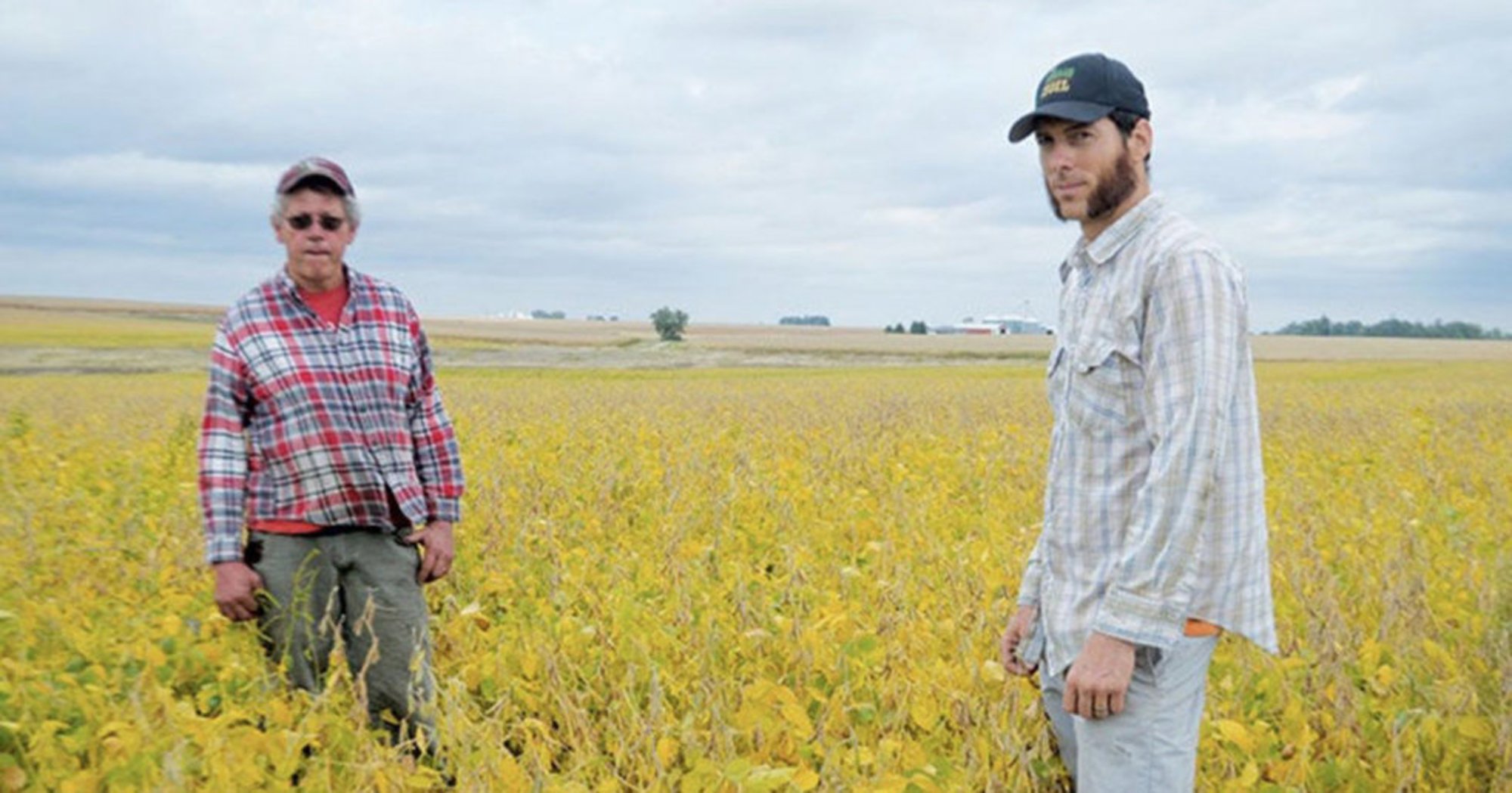 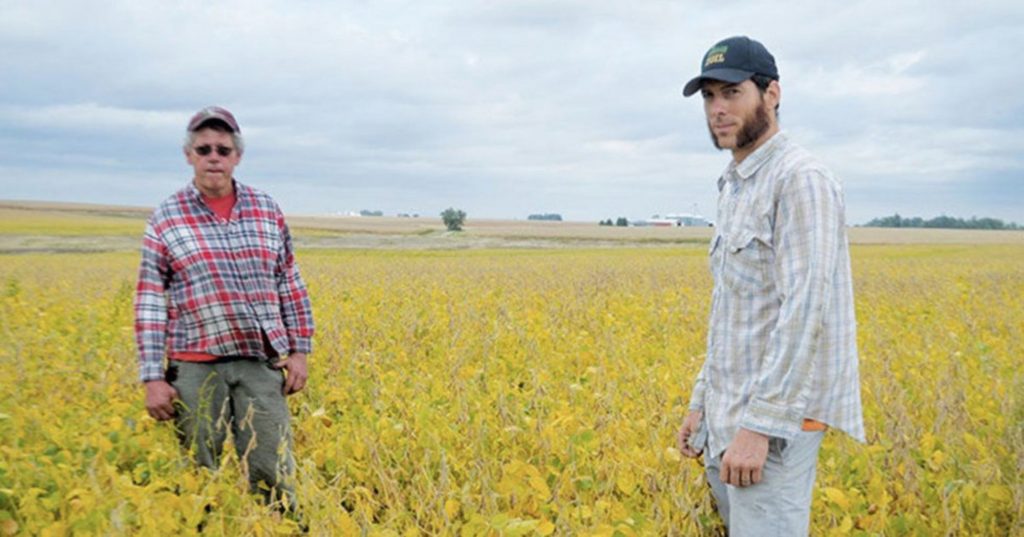 Blaine Schmaltz, who farms in Rugby, North Dakota, is a good example. One day in September 1993, Schmaltz was spraying an herbicide on his field. He stopped to check the level in the sprayer tank. Looking inside, he started to feel lame and then passed out. He was later hospitalized for several months with asthma, muscle aches and pains, and insomnia. A doctor diagnosed him as having “occupational asthma.”

“The doctor told me to leave agriculture,” Schmaltz said. “He said, ‘if you don’t you probably won’t live 10 years.'”

While recovering, Schmaltz read about organic farming and decided to transition because he wanted to continue farming. The next spring he started the transition, and over time found it was the right choice. His symptoms disappeared.

“I didn’t switch to organic farming for the money or a utopian dream,” he said. “I did it for myself and my family in order to stay in agriculture.”

“Common story for many farmers” …

Blaine Schmaltz’s experience is not uncommon. Other farmers in the U.S. and Canada have switched to organic because of a health crisis they had—or even the death of a family member—due to pesticide exposure.

“It’s definitely a common story for many farmers,” said Kate Mendenhall, director of the Organic Farmers Association, about farmers wanting to go organic because of concerns with pesticides.

Mendenhall’s master’s degree thesis at Goddard College involved interviewing farmers worldwide who transitioned to organic, and she found that pesticides were a major concern.

“That was a theme globally,” she said. “Farmers had problems with pesticides or were nervous about them and didn’t want them around their children. Some had prior health problems from pesticides.” A 2017 report by Oregon State University and organic certifier Oregon Tilth, Breaking New Ground: Farmer Perspectives on Organic Transition, found that 86 percent of farmers surveyed said that concerns about health was one of the main motivations for transitioning.

“My husband was slowly being poisoned” …

Klaas Martens also switched to organic because of bad reactions to pesticides. Martens, who farms in Penn Yan, New York, suffered headaches, nausea, and temporary paralysis of his right arm from exposure to 2,4-D herbicide and other chemicals.

Martens dreaded spraying pesticides. “I knew I would feel rotten for a month after,” he said.

His wife, Mary-Howell, would later write: “My husband was slowly being poisoned.”

In 1991, the Martens decided to transition to organic because, according to Mary-Howell, they hated what pesticides “might be doing to us, our family, our land, and our environment.”

The Martens have been farming organically ever since and operate Lakeview Organic Grain, which supplies organic feed, grains and seeds.

Saskatchewan farmer Gus Zelinski transitioned to organic after being hospitalized for pesticide poisoning. He inhaled the herbicide Buctril-M after it circulated into the air of his tractor cabin while he was spraying his field.

“I couldn’t get my breath; I was just about choking,” Zelinski said.

He was hospitalized for a week. “The doctor said I was lucky,” he said.

His wife Dolores said the incident led Gus to convert the farm to organic.

“We went with organic farming practices and didn’t look back. We decided that health was more important than our pocketbook and using chemicals.”

She said other farmers in their area weren’t as fortunate as Gus.

“There are a few farmers in our area who have passed on because of chemicals. But that’s not spoken about in farming communities.”

“I can’t tell you how many times I heard that in my (organic) inspection career. There were lots of stories about older farmers getting seriously ill or prematurely dying (due to pesticide-related illnesses),” he said.

“I didn’t want my kids exposed to the chemicals” …

In some cases, farmers switched to organic after their fathers experienced health problems from pesticide exposure. Tim Raile, who is transitioning his 8500-acre farm in St. Francis, Kansas to organic, said his father had used pesticides such as 2,4-D and malathion. He died of chronic leukemia at age 77 when others in his family had lived longer.

“I really believe that’s one reason his life was shortened,” Raile said. “He was not that careful (handling pesticides) and was told they were safe back in the 1960s and 1970s.”

Raile isn’t surprised that farmers have switched to organic because of concerns with pesticides.

“It’s quite common, and was a consideration for me, for sure. I’ve tried to protect myself using protective clothing, but inevitably you get sprayed and eventually it will cause problems,” he said.

Levi Lyle is transitioning his family’s farm in Keota, Iowa to organic, and his father’s cancer was a deciding factor.

“My passion for organic farming was inspired by my dad overcoming cancer,” Levi said in an interview with Iowa Farmer Today.

“He always wondered where the cancer came from,” Levi said. “There’s much we know about toxicity we add to our fields and so much we don’t know.”

Glen Kadelbach’s father wasn’t as lucky. He died of cancer in 2008, and Glen decided to transition the family’s farm in Hutchinson, Minnesota to organic shortly after his father’s death.

“My dad had gotten splashed with Lasso herbicide 20 years before and he was told he would eventually get cancer. He had prostate cancer and that turned to bone cancer,” Kadelbach said.

While Glen can’t be completely sure the pesticide exposure caused his father’s cancer, he said it was reason enough for him to go organic.

“I didn’t want my kids exposed to the chemicals,” he said.

Herbicides were cited as the cause of health problems for farmers like Blaine Schmaltz, Klaas Martens and Gus Zelinski. What’s worse is that herbicide-related health problems are likely to increase for farmers and even the public, according to Charles Benbrook, visiting scholar at the Bloomberg School of Public Health, Johns Hopkins University. This is because the amount of herbicides being used is accelerating due to weeds becoming resistant to glyphosate, the most widely used herbicide. Encouraged by companies like Monsanto and Dow, farmers are escalating the war on weeds by using older, more toxic herbicides such as dicamba and 2,4-D to kill glyphosate-resistant weeds.

“The concern is the amount of herbicides used in the next five to ten years is going to constitute the largest increase in U.S. history,” Benbrook said.

Such an increase of herbicide use demands attention by public health agencies and regulators but Benbrook said there is no effort to study human health impacts of the chemicals.

“Herbicides are going to pose a greater risk to human health,” he said. “This is a public health trainwreck that no one has the tools, the motivation, or the ability to turn around. The end game will be very costly.”

The solution for established farmers like Blaine Schmaltz, Klaas Martens, and Gus Zelinski and for younger farmers like Tim Raile, Levi Lyle, and Glen Kadelbach is to transition to organic.

“I am so anxious to get rid of the chemicals. I haven’t looked back,” Raile said.

“If I can reduce herbicide use by 20 percent, then reduce another 20 percent, in a few years I hope to eliminate it all. It’s a clear path for me,” Levi Lyle said.

Without the pesticides, Mary-Howell Martens said, “The farm is a safe place.”