Mexicans aren’t merely mourning the dead and disappeared; increasingly, they are mobilizing and taking to the streets to voice both their displeasure and their demands for accountability.

MEXICO CITY — Three film students in southwest Mexico go out to film a homework assignment; they are kidnapped and killed, their bodies dissolved in acid.

Two tourists – one German, one Polish– are traveling through southern Mexico on their bicycles; pathologists say one man was beaten and the other shot in the head execution-style, their bodies likely dumped near a highway.

A group of men, driving from Baja California to Coahuila to drop off a car, vanish and are never heard from again.

Modern Mexico has never seen so much bloodshed, or so many people who simply disappear as if by magic. Like bodies in a mass grave, the stories of a country seemingly at war with itself pile up. There were more than 25,000 homicides in 2017, the highest annual toll since the country began counting murders in 1997. Government officials and pro-government journalists have tried to portray the profligate violence as some cosmic coincidence in which many victims were merely in the wrong place at the wrong time.

Not many here buy it. What is becoming increasingly clear to Mexicans is that, in a state increasingly governed by criminal drug cartels and corrupt politicians, any place can be the wrong place and any time the wrong time — and Mexico’s expanding lawlessness means almost no one is safe.

Banding together and turning up the pressure But Mexicans aren’t merely mourning the dead and disappeared; increasingly, they are mobilizing and taking to the streets to voice both their displeasure and their demands for accountability. Reminiscent of the protests against Argentina’s military junta rulers during that nation’s La Guerra Sucia, or Dirty War, in the 1970s, mothers of the dead and disappeared and student activists are pouring into the streets to effectively demand a restoration of the rule of law in Mexico.

Said Maria Salafranco at a rally in Mexico City earlier this month, reading a statement from classmates of the three slain film students at the Higher School of Cinema:

Andres Manuel Lopez Obrador, the left-leaning former mayor of Mexico City who is the frontrunner in the polls, has proposed a dialogue with organized-crime groups, with the possibility of amnesty for those who cooperate. His rivals have used this proposal to attack him, yet have not offered any alternatives; and his closest rival, Ricardo Anaya, has said he would continue with the government’s current strategy of using the armed forces against cartels, with the caveat that he will place greater emphasis on technology and intelligence. Another candidate has literally proposed amputating the hands of criminals as a deterrent.

Balam Gallegos, a political-science student at the National Autonomous University of Mexico, told MintPress News that people must take to the streets and build a social movement if they want to improve Mexico’s insecurity. Said Gallegos:

I do not believe there is another way to put pressure [on the system].”

Should such a mass movement come to fruition, its seminal moment will no doubt be the 2014 disappearance of 43 college students from the town of Ayotzinapa in southwest Mexico. Prosecutors and government officials in that case suggested that the students were “in the wrong place at the wrong time” when they were accosted by organized crime, and their bodies incinerated in a giant pyre. The government’s theory was largely based on testimony provided by suspects, but an investigation by the Office of the United Nations High Commissioner for Human Rights in Mexico found that the confessions were obtained by torture, and independent forensic investigators concluded that the officials version of events was implausible. 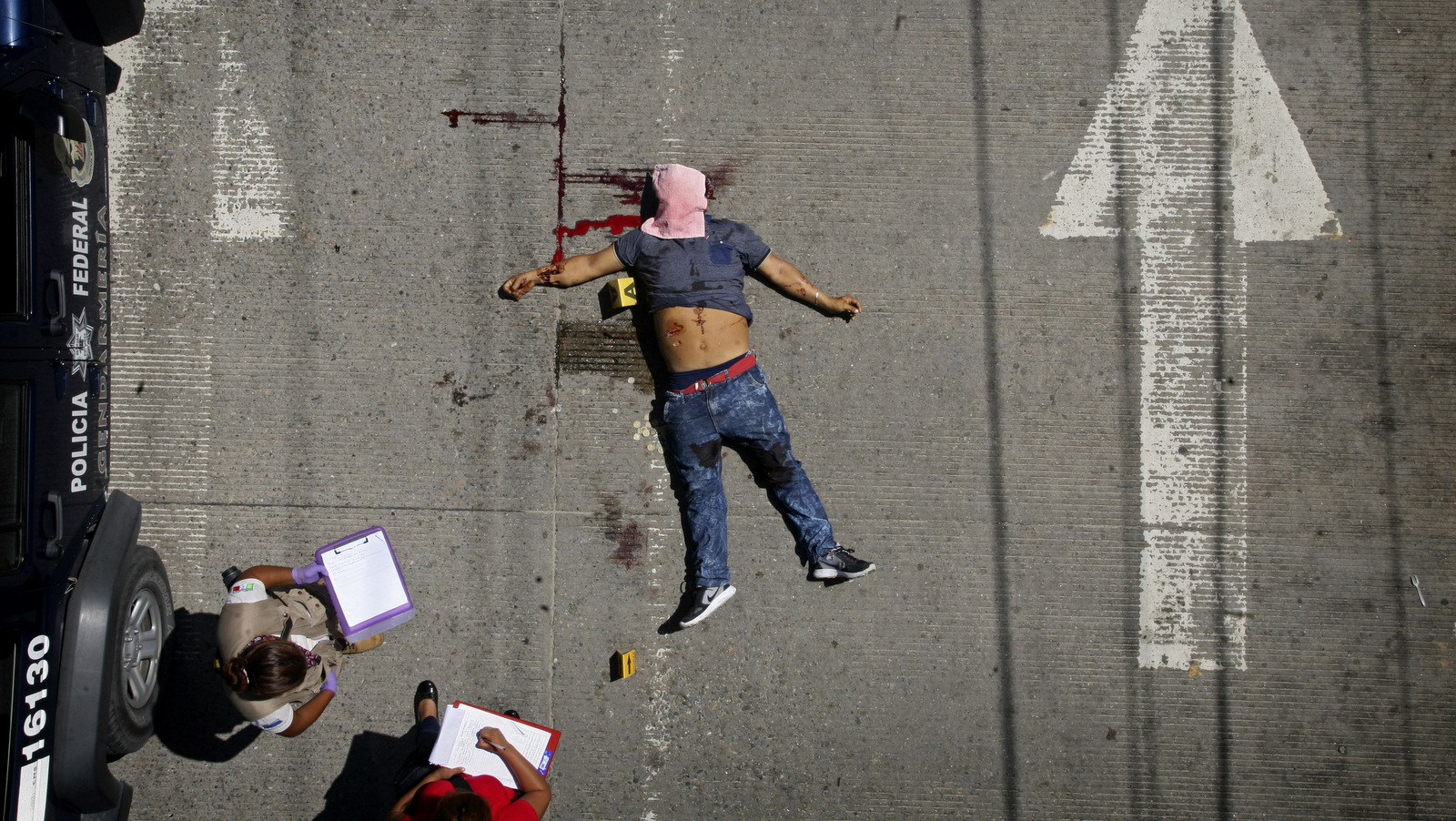 Police investigators take notes by the body of a man shot in broad daylight in Acapulco, Mexico, Aug. 13, 2017. (AP/Bernandino Hernandez)

The body of Chmielewski was found first and officials had claimed he likely died as a result of a road accident, despite the fact that his body was found decapitated and with a foot missing. Prosecutors told the media that a fall down a steep slope might have decapitated him, and that his foot could have been eaten by a wild animal, yet most of his remains were intact, with no other signs of having fallen down a ravine.

An autopsy showed that Hagenbusch died of a gunshot wound to the head. Prosecutors then also revised their theory regarding Chmielewski, saying that he died as a result of blunt force trauma to the head. The working theory now is that the two men were killed elsewhere, and their bodies dumped in the ravine. Robbery was the likely motive.

In the case of the three students – Javier Salomon Aceves, Jesus Daniel Diaz and Marco Francisco Avalos – the office of the attorney general in the coastal state of Jalisco suggested they were killed because an organized crime outfit misidentified them as belonging to a rival group. The students’ apparent mistake? Filming in a house that was once used as a safe house for the Nueva Plaza cartel.

Authorities arrested a rising YouTube rapper, Christian Omar Palma Gutierrez, known as “Qba,” who they say received $159 a week from a cartel. By now, however, law enforcement’s credibility is shot.

The father of one of the youths, Ramón García, told Mexican media outlets last month:

We won’t accept these lies that are satanic, machiavellian, and straight out of Frankenstein.”

He questioned the lack of physical evidence, such as DNA or the acid barrels that were allegedly used to dissolve the young men. He continued:

If they wanted to turn the page, what they did was open up the book more.”

We have plenty of reasons to doubt [the authorities].” Women hold a sign that reads ‘Justice for Our Disappeared Children’ on Mother’s Day in Mexico City, May 10, 2018. (Photo: José Luis Granados Ceja)

For the past seven years, the mothers of people who have been forcibly disappeared have marched on Mother’s Day to demand justice and the return of their children.

Adriana Moreno, a resident of Baja California, traveled to Mexico City to take part in this year’s rally. Her son Adrian Rodriguez Moreno, together with two associates, Heber Eusebio Reveles Ramos and Jose Maria Plancarte, had driven to the state of Coahuila to drop off a car. On May 11, 2009 they were intercepted by police in the town of Francisco I. Madero and have not been heard from again.

Several police officers were arrested and confessed that they turned over the men to Mexico’s most notorious criminal cartel, Los Zetas, for money.

Moreno says it has been an arduous struggle to get authorities to take action, she has had to fight tooth and nail just to get the tiniest piece of information about her son’s case from the state. They promise to follow-up but never do.

Mexican lawmakers have passed several laws in response to the violence plaguing the country but, according to Moreno, these laws have not had much effect. “It is just a show. That’s why our fight is also to demand the law be carried out,” Moreno told MintPress News.

She adds that in the years since her son’s disappearance she has explored every option available, even turning to palm readers, in the hopes of having her child returned to her. She says she knows of mothers who have searched mass graves for the remains of their missing children.

The thousands of mothers in Mexico and Central America, in light of the incapacity and corruption of the authorities, have had to become lawyers, investigative police, forensic experts, trackers of clandestine graves and even legislators to make laws and protocols that serve as a tool in the search and identification of our missing loved ones.”

Maria Socorro Calderon lost her husband in circumstances similar to Moreno’s.  She says that the prosecutor handling the case has been replaced several times and it typically takes the new prosecutor months to get up to speed. She believes this is a delaying tactic. Despite everything, however, Calderon says she remains hopeful:

I know this struggle will take time, [but] I hope not too long [or] otherwise we will have many grave markers in our country, in every corner of our land.”

Top Photo | A woman holds an image of her husband who was detained and assassinated by the state during Mexico’s dirty war against leftist social activists in the 1970’s, the image reads ‘As long as I’m alive, you will never be dead’, Mexico City, May 10, 2018. (Photo: José Luis Granados Ceja)

José Luis Granados Ceja is a writer and photojournalist based in Mexico City. He has previously written for outlets such as teleSUR and the Two Row Times and has also worked in radio as a host and producer. He specializes in contemporary political analysis and the role of media in influencing the public. He is particularly interested in covering the work of social movements and labor unions throughout Latin America.