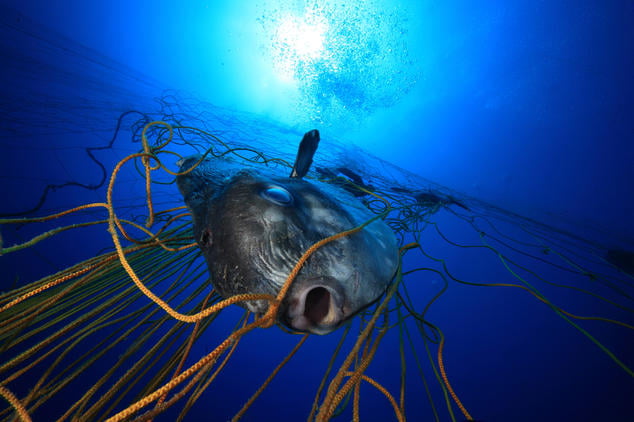 A new report estimates that around 700,000 tons of fishing gear area abandoned in the oceans each year. Now the good news: We can curb this.

Divers off the coast of the Cayman Islands last month came face to face with a ghoulish sight: a gigantic mass of abandoned fishing gear and its catch. The monstrous net, as wide and deep as the Hollywood sign is tall, drifted just below the water’s surface with tendrils that teemed with hundreds of dead and dying fish and sharks.

The divers attempted to cut some of the trapped souls from the tangled mess of netting and buoys, but most of them were already lost. Many more had been dead for so long, the divers said, that it was impossible to tell what species they were. The men tried to haul the massive net back to shore but said it was much too heavy for their boat to tow. (The Department of the Environment of the Caymans later recovered the net. Volunteers cut up the tangled mess and shipped it to Parley for the Oceans, who plans to turn it into new products.)

This knot of ruin is completely unremarkable in the context of the global “ghost gear” crisis. A new report from the international nonprofit World Animal Protection (WAP) estimates that at least 700,000 tons of new ghost gear enter the sea each year. Once it’s there, the flotsam can harm all kinds of sea life, including turtles, penguins, sea lions, dolphins, whales, and diving shorebirds. The report found that 45 percent of all the marine mammals listed on the International Union for Conservation of Nature’s Red List of Threatened Species have been killed or harmed by abandoned fishing gear.

“It’s not shocking to me,” says Charles Grisafi, the Florida and Caribbean regional coordinator for the NOAA Marine Debris Program. “These nets are huge. You can see gill nets out there over two miles long.”

Ocean plastic has garnered lots of attention in recent years (as it should), but fishing gear makes up a huge chunk of that problematic plastic. Unlike plastic bottles, drinking straws, and grocery bags, this gear was designed for one purpose: catching and killing sea life. And it continues to do so long after the anglers who deployed it return to shore.

Ghost gear masses like the Caribbean discovery are essentially giant fish traps that perpetually re-bait themselves. The trapped animals attract predators and scavengers who then become ensnared themselves. After death, their rotting carcasses draw in still more victims and the cycle goes on and on, basically forever.

This is not hyperbole. The plastics that make up most of the nets in the oceans today take around 600 years to break apart. One old gill net found wedged between rocks off the coast of the San Juan Islands reportedly sat atop a pile of marine bird and mammal bones that was three feet deep.

For larger animals like whales, entanglements don’t always bring a quick death. They instead confer a life sentence of towing around a heavy aquatic ball and chain, the health effects of which scientists are only beginning to understand. (Spoiler alert: It ain’t good.) And as with other ocean pollution, some animals eat ghost gear, as evidenced by necropsies of 22 sperm whales stranded in the North Sea. Of all the nonfood items in their guts, 78 percent was fishing gear, including, in one case, a plastic fishing net that was more than 42 feet long.

There are numerous paths by which this waste winds up in the water, says Elizabeth Hogan, WAP’s U.S. oceans and wildlife campaign manager. Gear can malfunction and detach, nets can get stuck on reefs or other objects and never resurface, and, yes, some fishermen simply discard nets and traps out of convenience or as a way to cover their tracks when they’re fishing illegally. The largest contributor to ghost gear, though, is the weather. “I would say [that’s] the primary reason for gear loss,” says Hogan, “and who can argue with bad weather?”

It’s not as if most fishermen want to lose their gear, after all. When a series of storms ravaged the British Isles in the winter of 2013–2014, some crab fishermen lost upwards of $35,000 worth of gear when conditions forced them to abandon their strings of pots.

Whatever the excuse, something needs to be done about it—and this is where Grisafi and Hogan share some optimism. As tagging gear with GPS devices becomes easier and more affordable, Hogan says it will help enormously in the fight against new ghost gear. Similarly, Grisafi points to technology advancements that can help make gear less lethal once it’s lost. These include making fishing nets more biodegradable in general or incorporating biodegradable panels into traps so they no longer continue to catch and kill ad infinitum. Simple tweaks to existing gear, such as adding cull-rings that allow smaller crabs to escape a pot, can also make a big difference.

But there are still miles and miles of drifting killers out there. The NOAA Marine Debris Program finances removal projects so big, they run in the hundreds of thousands of dollars. Projects range from collecting derelict crab pots in the waters off New Jersey to floating traps that catch litter on Maryland’s Anacostia River to removing an 83-foot shipwreck off the Northern Mariana Islands that’s damaging coral habitat.

That’s why his outlook is positive. Because we’ve only just begun to address this problem, the only way to go is up.