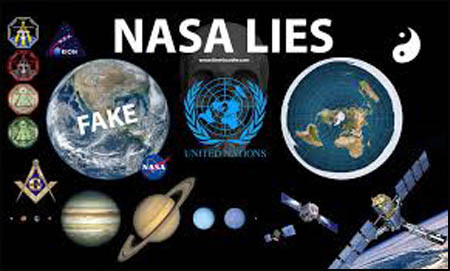 There are a lot of frustrated, angry people demanding answers about the so-called space programs. There are the visible, pathetic space programs for the masses, and the almost invisible black secret space programs that will do anything to prevent the general population from knowing who they are and what they do.

Inquisitive, distrustful folks research.  They use logic and critical thinking because they HAVE to.

Scientists and astronauts (traitors) really need to get their stories straight. They can’t even decide if they can or can’t see stars when they’re in space.

If you watched the video I shared this week from Logic Before Authority, you saw “astronauts” clearly wearing harnesses attached to invisible wires so they could do their weightless somersaults. After the one hour mark you saw a crew in a remote area in the Canadian arctic—Devon Island—with a Mars rover and camera and a Humvee with the NASA logo and “Mars Rover Project” on it.

There is ample proof they are up there, so why, after all the other lies, would we believe they are actually landing on Mars? And where are the missing trillions being spent, exactly? These are valid questions.

The video below is from the Jeranism channel, a guy who had his doubts about the ISS, so he set up his equipment and finally was able to capture the ISS sailing in front of the full moon, confirming it’s shape—but like Daniel in the LBA video, he doesn’t believe there are any people on the ISS, and he shows us the many reasons we have to doubt the double-speak from NASA and other controlled scientists in the club.

None of this may matter to folks going about their daily business on Earth, but some of us take exception to our governments using trillions of dollars of taxpayer money for undisclosed or bogus projects and lying about it—the least of those crimes being that there are starving people on the surface of the planet, dying of disease, lack of water, and no shelter.

Now that President Trump has announced America will have a Space Force, we’d better be paying attention. There’s been little to no accountability in the past about anything the government/NASA does. Most people are unaware that NASA is no longer a government agency and there is no government oversight for what they do. They work with defense contractors who build the craft and technology.

We have SpaceX supposedly working with NASA, independent corporations and government contractors, making trips to the ISS with cargo, launching umpteen satellites, shot down at least once by a “UFO”… and we’re still feeling like our questions don’t get straight answers.

There’s a lot going on in low Earth orbit they don’t want us knowing about. Like weaponized craft.

Fortunately, the lies are going to stop, and the truth will be told. There are those who are not happy about that because it will expose their crimes; massive, unforgivable crimes. For years they’ve been threatening and bullying nations who have wanted to come forward and deliver the truth about our life on this planet and space travel, extraterrestrial life engaging the Human population, Human trafficking in space colonies, etc. It’s all going to come out very soon. FULL Disclosure.

I have countless questions of my own, and the one that keeps coming back is, if the Earth is round, fine, but where are we? It doesn’t seem that we are living where they tell us we are. Why is there a fake sun simulator? Why is air traffic not permitted over the poles? Why are so many people distrusting of the old narrative? Something isn’t right and deep-thinking people can feel it.

Why are there multiple “suns” photographed all over the world  now? Why is the sky light in the middle of the night where it always used to be dark?

Yellow Rose for Texas showed us images from SOHO/SECCHI and tells us we don’t see the planets as they really are. She showed us images from 2007 of space wars destroying planets. She says that “comet” Ison is a ship belonging to the positive allies. She says the gigantic spheres we see in space are ships, the Pit, etc. She tells us the fake sun, the firewall the controllers put between us and the real sun, was destroyed as well.

It sounds crazy, but not as crazy as the lies NASA tells us. We want the truth, and until we are told once and for all what the deal is with Humans, where we live, the reality of space and ETs, consciousness and “God”…we’re going to keep poking around looking for our own answers.

Knowing we’ve been lied to is the first step. Once you get past that unfortunate truth there are vast, exciting possibilities, and I enjoy hearing the various perspectives.

Thomas Williams told us on his Thursday show, July 5, that the cabal was planning another “fake alien invasion” any time now. That isn’t going to happen, but there are factions who do want to control the narrative for disclosure, and it’s their version of disclosure—not necessarily the real, full, unadulterated, gut-wrenching, gobsmacking Disclosure we deserve.

Those people wanted to withhold full Disclosure from us for a full 50 years to avoid the severe penalties they deserved. That is not going to happen, either.

Here’s an attempt by one of the “Secret Space Program” factions to bring us their version of disclosure, which would probably be just the tip of the iceberg. It’s quite the team they have assembled here, but I have a question: How is Jordan Sather in any way, shape or form, an authority—on anything? What are his qualifications? Does he get his experience via osmosis from Corey Goode? I can’t take this production seriously because it comprises a hand-picked team—with the information controlled by handlers, some would say.

Another problem I have with disclosure in this form is that it continues the decades-old drip-disclosure through entertainment. A movie is not disclosure. It will not get to everyone, and it’s not a trusted source. Hollywood lies as much as NASA.

Full disclosure comes from trusted, respected, world-renowned leaders. It’s very hard to find people like that but we are getting there. If people can take their blinders off and intelligently analyze world events, we can present those leaders in short order. It must come from them. It can be no other way because of the brainwashing and programming in the masses. It cannot come from media whores, because they are known for their spin and lies and are currently self-destructing, and it most certainly cannot come from alternative media self-appointed “saviours”.

Perhaps representatives from major powers like Russia, America, China, India, Australia, Britain, etc. will assemble on one stage to break it to the world, I don’t know, but they had better do it soon. We are sick of the lies, and we can spot the liars. It’s CYA time so we’re going to hear a lot more of them.  ~ BP