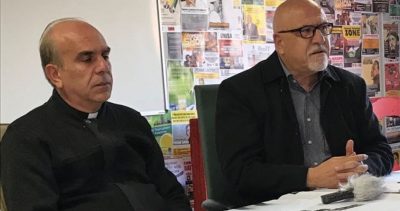 Christians are no longer welcome in the Holy Land. This was the shocking message from a visiting Palestinian Christian delegation currently in South Africa.

In an interview with the Afro-Palestine Newswire Service on Sunday, Father Jamal Khader and Dr. Rifat Kasis painfully documented the discrimination facing Christians, and how they are being denied the right to worship at Christianity’s most sacred sites in the Holy Land. This has led to a drastic decline in the Christian population there. The chief cause of the Christian exodus, according to Khader and Kasis, is Israel’s illegal occupation of Palestine.

Khader, a Catholic pastor, described how during Easter  (one of the holiest times of the year for Christians), the sacred Church of the Holy Sepulcher – “a site central to Jesus’s death, crucifixion and resurrection” – resembles a military barracks. Barriers are set up in the early hours of the morning to keep people out of the courtyard of the Church. Israeli army officers are present around the gates of the Old City and passages that lead to the Holy Sepulcher, as well as inside the Church itself and on its roof. These measures restrict freedom of movement for Palestinians, preventing Palestinian Christians from worshipping at the Church during this auspicious period. Even priests are not allowed to move freely.

“This is what I mean when I say that Christians are not welcome in the Holy Land”, says Khader.

Christian-owned land has also been confiscated to make way for illegal Israeli settlements. For instance, in Beit Jala – a Christian-majority town just outside Bethlehem – the 133-year old Cremisan Monastery, as well as its neighboring convent, winery and school, have all been earmarked for Israeli settlement expansion.

“We, Palestinian Christians, suffer along with the rest of Palestinians from occupation and hardships. Muslims and Christians suffer equally, as there is no difference in suffering for any of us,” says youth activist, Muna Nasser.

According to Nasser, many Christians feel that there is little hope for a better future for their children, and this has contributed to the growing emigration of Palestinian Christians.

“I hope that they do not move. Our mere existence on this land is resistance to the occupation.”

According to the delegation, the chief cause of the decline in the Christian population of Palestine is not due to so-called Islamic fundamentalism or the persecution of Christians by their Muslim neighbors. These are misrepresentations used to distract from the realities of occupation. It is the occupation that has made life so difficult that many Christians have left Palestine.

The delegation will be speaking to various church, student and political groups in South Africa, and has a strong message for the South African government. “If South Africa wants to respect its history and respect the solidarity it received from the rest of the world, then this country should be the first to sanction and boycott Israel,” says Kasis, a Lutheran cleric.

The South African Council of Churches (SACC) has condemned Israel’s discrimination against Palestinians:

“Israel is structured in a way that fits and even surpasses the description of an Apartheid State, which robs Palestinians of their citizenship and treats them in a discriminatory way. With our experience of Apartheid that the whole world recognized and condemned as a crime against humanity, we see the treatment of the Palestinians by Israel as worse than Apartheid,” SACC leaders said during a visit to occupied Palestine in June last year.

The SACC has also called on its members to look critically at theological perspectives that tend to veer in the direction of Christian Zionism which supports the illegal Israeli occupation of Palestine.