“Most people (including policymakers) still have no idea that skimming fees off public employees’ retirement savings has become one of the largest sources of profits for Wall Street moguls.” 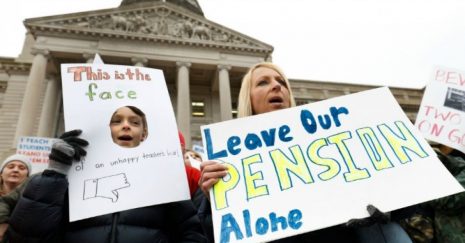 In a frenzied bid for higher profits in the decade following the 2008 financial crisis, Wall Street pension fund managers have siphoned as much as $624 billion from Americans’ retirement savings—and, as a direct result, taxpayer coffers—through a vicious combination of high fees and foolish investment strategies, according to an analysis published Thursday by Yahoo Finance.

“Because pensions are guaranteed, the underperformance has hit taxpayers in the form of budget cuts for schools, hospitals, and libraries and decreased spending on infrastructure, healthcare, and other public projects.”
—Dion Rabouin, Yahoo Finance


The steepest costs to taxpayers have stemmed from Wall Street pension managers’ commitment to so-called alternative funds, which invest in private equity and hedge funds rather than traditional stocks and bonds.

“The total amount pension funds could have saved by simply investing in index funds could be more than $1 trillion,” notes Yahoo Finance reporter Dion Rabouin. “Because pensions are guaranteed, the underperformance has hit taxpayers in the form of budget cuts for schools, hospitals, and libraries and decreased spending on infrastructure, healthcare, and other public projects.”

Responding to Yahoo‘s analysis in a series of tweets on Thursday, Capital & Mainjournalist David Sirota observed that in five years of reporting on Wall Street’s investment tactics, he has found that “most people (including policymakers) still have no idea that skimming fees off public employees’ retirement savings has become one of the largest sources of profits for Wall Street moguls.”

Wall Street executives have sucked $600 billion out of public employees' retirement savings in the last decade — and yet the political conversation over public pension shortfalls basically blames ripped-off public employees for being greedy. https://t.co/npxkzos9Ti

Because these gains haven’t materialized, public pensions have lost hundreds of billions of dollars over the past decade, and taxpayers have been left to pick up the tab.

“The sales pitch of the alternatives community is, ‘We’ve got some kind of secret sauce. Our returns are going to be higher than stocks and bonds,'” Jeff Hooke, a lecturer at Johns Hopkins University who has authored several studies on public pensions, said in an interview with Yahoo Finance. “The only problem with the sales pitch is it doesn’t work.”

The Intercept‘s Briahna Joy Gray concluded on Thursday that Wall Street’s continued abuse of public pensions in an effort to boost profits is a clear demonstration that “obscene wealth doesn’t come out of the blue, but that it’s a direct consequence of exploitation.”

Regular people are realizing more and more that obscene wealth doesn't come out of the blue, but that it's a direct consequence of exploitation.