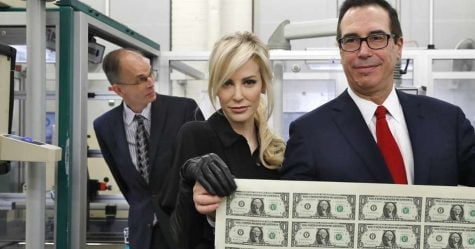 Treasury Secretary Steven Mnuchin and his wife, Louise Linton, hold up a sheet of new $1 bills, the first currency notes bearing his and U.S. Treasurer Jovita Carranza’s signatures on Nov. 15 at the Bureau of Engraving and Printing in Washington. (Photo: Jacquelyn Martin/AP)

“When people demand specifics on how to pay for expansions to social insurance, income supports, and public investments, seems like part of the answer is just ‘we could stop doing this.'”

With $5.1 trillion, the U.S. government could provide healthcare for all Americans and make public colleges tuition free with cash to spare, but a report released on Wednesday by the Institute on Taxation and Economic Policy (ITEP) shows that the past three presidents have instead opted to send this vast sum of money to the richest Americans through massive tax cuts.

“These policies have transferred trillions in wealth to those who were already rich.”
—Alan Essig, Institute on Taxation and Economic Policy

Titled “Federal Tax Changes in the Bush, Obama, and Trump Years,” the new analysis (pdf) finds that tax cuts enacted since 2000 have cost the U.S. government $5.1 trillion in revenue, “with nearly two-thirds of that flowing to the richest fifth of Americans.”

Thanks in large part to President Donald Trump’s $1.5 trillion tax cut package that was signed into law last December—which will send 83 percent of its benefits to the top one percent—”the tally of tax cuts will grow to $10.6 trillion” by 2025 and “nearly $2 trillion of this amount will have gone to the richest one percent,” the report estimates.

Great report here from ITEP. When people demand specifics on how to pay for expansions to social insurance, income supports, and public investments, seems like part of the answer is just 'we could stop doing this'https://t.co/vvwH2Wfaos

t a time when tens of millions of Americans are suffering from “massive levels of deprivation” and “appalling rates” of poverty, the tax cuts rammed through by George W. Bush, extended in part by Barack Obama, and built upon by Trump “have mostly benefited those who are least in need of help,” Steve Wamhoff, director of federal policy at ITEP and the lead author of the new analysis, argued in a statement on Wednesday.

“For example, the richest one percent received more benefits than the bottom 60 percent,” Wamhoff added. “It’s worth asking whether this is the result most Americans wanted from their lawmakers.”

Polling data suggests that it is not. As Common Dreams reported, a poll published last month found that just 37 percent of registered voters support Trump’s massive tax cuts, which America’s largest corporations are using to buy back their own stock rather than boost worker pay.

While Trump’s tax cuts are the latest and most egregious example of tax policy that rewards the rich at the expense of everyone else, ITEP executive director Alan Essig notes that this upward redistribution of wealth is part of a broad trend of soaring inequality that consecutive administrations have fueled.

“These policies have transferred trillions in wealth to those who were already rich,” Essig said of tax changes under Bush, Obama, and Trump. “Annual income for the top 20 percent of households has grown since 2000. But it essentially has remained stagnant for families in the middle-income quintile and declined for poor and low-income households.”