Prepare For Change
Home Uncategorized TRANSCENDING THE CAVE AND THE MATRIX 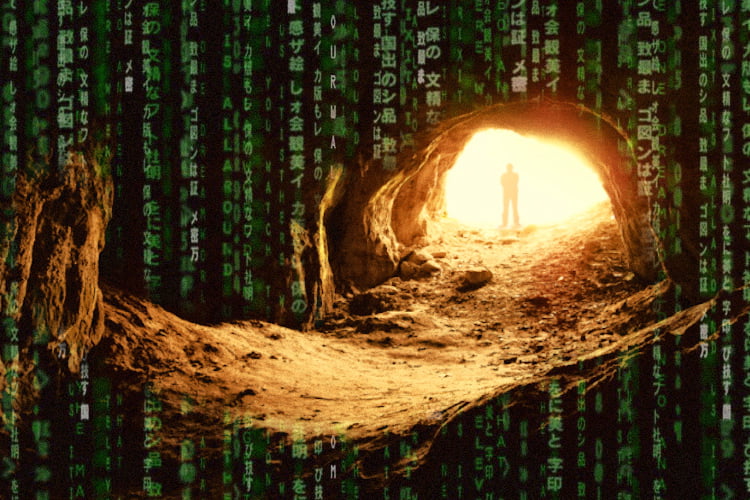 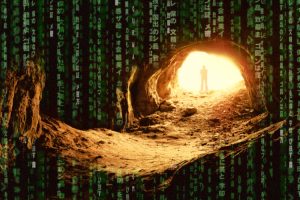 Nature is busy creating absolutely unique individuals, whereas culture has invented a single mold to which all must conform. It is grotesque.” ~U. G. Krishnamurti

The mold which culture conforms to is the Cave that Plato elaborated on, and the Matrix that Neo had to overcome. As such, our Matrix/Cave is the cultural mold we tend to cling to. Therefore, in order to progressively evolve (as individuals and as a species), indeed, in order to transcend the Cave and overcome the Matrix, we must be willing to break the cultural mold. This is easier said than done, because fear of the unknown is ever-present.

Here’s the thing, down and dirty: Soul-Initiation requires ego-annihilation. This isn’t complete destruction, mind you. It’s creative destruction. Similar to the way a caterpillar gets annihilated in the cocoon and then put back together again in the form of a butterfly, an ego-centric perspective gets annihilated by overcoming an existential threshold and then comes back together again in the form of a soul-centric perspective. But unlike the caterpillar which acts on instinct to create its cocoon, the human animal must act on courage to create their cocoon phase.

Both the Cave and the Matrix are meta-symbols for unquestioned delusions. An ego that forms without the ability to question will forever remain uninitiated (trapped in the box of its own delusions) unless an outside force –something traumatic like a death in the family or a near-death experience– acts upon it with enough pressure to kick it into a cocoon phase.

Sometimes traumatic events give us the courage to question ourselves, but rarely is that enough. At some point we will still have to take the leap of courage into questioning who we think we are. The more we question, the more the shadows in the cave begin to blur and the sunlight creeps in. The more the Matrix begins to melt into the Desert of the Real. The more the boxes we used to think inside begin to flatten. The more the fragile mental paradigms our thoughts were trapped in get shattered against the robustness of our skepticism. Things open up. Things become illuminated. Providence becomes the reason to continue the practice of questioning ourselves to the nth degree.

So question yourself, but don’t stop there. Shift all paradigms. Shake all secure foundations. Upset all outdated apple carts. Ruffle all overly-serious feathers. Especially if you’re the one clinging to secure foundations and pushing that outdated apple cart. The mightiest leap of courage you can take is drawing the Question Mark Sword out of your scabbard and cutting through the delusion of your certainty.

Because, here’s the thing, it’s delusions all the way down. As Scott Adams said, “The human mind is a delusion generator, not a window to truth. The best any human can do is to pick a delusion that helps him get through the day.” The Cave gets you through the day. The Matrix gets you through the day. Questioning both the Cave and the Matrix gets you past your egocentric perspective and ushers in the raw materials necessary to develop a soul-centric perspective that keeps the cycle of self-questioning going, which keeps Fear on its heels and gives it no choice but to be fuel for the fire of authentic and healthy change.

“Run from what’s comfortable. Forget safety. Live where you fear to live. Destroy your reputation. Be notorious.” ~Rumi

Questioning yourself only gets you so far. There is still culture to deal with, and culture is the main prop-and-stay of the Cave and the Matrix. You are an aspect of culture, like a drop in the ocean, so you must also have the courage to question your cultural skin. This is probably the scariest leap of courage because there is the inherent threat of ostracization. Which is a likely possibility.

Before you can handle the blinding light outside the Cave, before you can withstand the pain of the Desert of the Real outside the Matrix, you must experience the destruction of your former self. Some call this ego death. Some call it a dark night of the soul. We’re using the metaphor of the cocoon. And inside the cocoon there is the absolute annihilation of the uninitiated ego (the naïve, ignorant, codependent self) before the complete reanimation of the ego that is initiated by Soul.

Deep philosophical questions must be asked. Such as: would I rather the pain of knowing the Desert of the Real or the comfort of remaining ignorant within the Matrix, would I rather be kissed with lies or slapped with the truth, would I rather the uncertain adventure of navigating my way out of the Cave or the security of remaining safely chained to the wall. Answering these questions can be a destructive process. But that’s okay. Because if you can survive it, the wisdom in your scars and the experience in your weathered soul will make you even more capable of being illuminated by the sunlight outside the Cave and being moved by the harshness of the Desert of the Real outside the Matrix.

So destroy the version of yourself that clings to your chains. Annihilate the aspect of yourself that ignorantly squabbles at the feet of Delusion. Demolish all thrones and alters. Especially if your pride is being held hostage. Knockout the kneecaps of God himself, if need be. As Dostoevsky profoundly stated, “Man simply invented God in order not to kill himself. That is the sum of universal history down to this moment.” Indeed. So destroy God. Then reinvent God. It’s all you anyway. Be the Phoenix. Relish in the ashes, and then rise up a stronger more robust version of yourself prepared to adapt to, and overcome, the vicissitudes of life.

“The idea of a second birth is found at all times and in all places.” ~Jung

Being initiated by Soul is being illuminated by truth. It’s authentically seeing the sunlight. It’s genuinely feeling the harshness of the Desert of the Real. It’s the ability to rebirth ourselves, cyclically, again and again. What is the truth? The truth is, before, we were trapped by Fear and we weren’t aware of our delusions, whereas now, in the cosmic throes of our rebirth, we are free to question our delusions and thereby stay ahead of Fear. We can look back on our path and see how our codependence (on the Cave/Matrix) dissolved into independence (in the cocoon phase) which dissolved into interdependence (rebirth). And now we are prepared to rise above our delusions (transcendence).

The delusions are still there, of course, because delusions will always be there. Delusions are a survival strategy for a creature that knows that it knows, that knows it’s going to die, that must grapple with both the smallness of living in an unfathomably large universe and the finiteness of being a mortal creature destined to die despite holding infinity in its heart. As Berdyaev surmised, “Man is a finite, limited creature but he holds infinity within him, and he demands infinity as an end.”

But at least we are no longer slaves to our delusions. We are no longer slaves to Fear. We have gained the transcendent capacity to question our delusions and challenge our fears. We have earned the spiritual wherewithal to be flexible and robust against the inherent meaninglessness of reality. We’ve secured the existential aptitude to embrace that infinity in our heart and hold it up against the meaninglessness of the universe and declare it meaningful despite.

So yes. Erect your Gods. Bask in your delusions. But then have the courage to question whatever flavor of Cave or essence of Matrix you can imagine yourself stuck in. Just be sure to tear your God down. Kill your codependent self so that your independent self can emerge with the audacity to become your interdependent self which has the power to transcend fear and delusion. Build, destroy, rebuild, redestroy. Don’t remain too long in the outdated comfort of any Cave or Matrix. Feel the existential absurdity if it all. Soul to marrow. Heart to bones. Then laugh. Rise above it. Wreck yourself against infinity.