Prepare For Change
Home ARCONTES Palestinians were never at the table 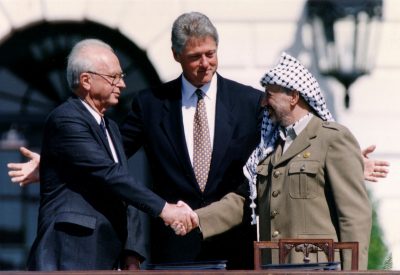 This month marks the 25th anniversary of the beginning of the Oslo accords and the signing of the Declaration of Principles in Washington in 1993.

The accords were touted as the only way to reach a permanent peace between Palestinians and Israelis based on the “principles” of mutual recognition and “land for peace.”

An agreement was presented as one where Palestinians would end up enjoying freedom and self-determination on their own territory. What that territory would be in law, as well as the status of Jerusalem and a resolution to the plight of Palestinian refugees, would be addressed over five years of negotiations that were to culminate in 1998.

It was hoped that during this time, mutual trust and confidence-building measures would generate enough momentum to ensure that a final settlement would be unstoppable.

Not only did it not happen, it all turned out to be unworkable subterfuge.

Largely, the problem was the negotiating part. The process was deliberately set out with no sense of what a final agreement would actually look like. That way, both parties could claim that they were not compromising fundamental principles. This became known as “constructive ambiguity,” a phrase suggesting that obfuscating fundamental issues would help prepare public opinion for the “painful compromises” that lay ahead.

But it was simply obfuscation and it served only the stronger party.

Both sides had been quite clear about what they wanted. The Palestine Liberation Organization – which had secured just one achievement from the Declaration of Principles document: formal recognition as the Palestinian representative – wanted a state with full sovereignty on all the territory of the West Bank and Gaza occupied by Israel in 1967, allowing for minor territorial adjustments on a 1 to 1 basis.

East Jerusalem would be its capital.

As for the right of return of refugees, the PLO was always more malleable, settling on a “just resolution,” a position that became more and more flexible as time wore on.

Israel was equally unequivocal: there was no talk of statehood for Palestinians, only self-rule. Israel would retain the vast majority of existing settlements and control over international borders, airspace and water resources, all seen as national security interests.

Jerusalem would remain Israel’s “eternal, undivided capital,” and any mention of a right of return of Palestinian refugees was a non-starter.

Constructive ambiguity also meant that while the parties were free to assert their respective priorities to the media, the document they signed used only the language of lowest common denominators. In other words, the Declaration of Principles was set out on Israel’s terms.

Thus, there was no mention of Palestinian statehood, no mention of Palestinian sovereignty, and no mention of refugee rights. Jerusalem, refugees and borders were simply issues to be discussed in negotiations and to be resolved along the precepts of the famously vague UN Security Council Resolution 242 that talks of an Israeli withdrawal from “territories occupied” (not the occupied territories, thus leaving their definition inexact) and a “just settlement” to the refugee issue, without specifying.

Never at the table

What this did was legitimize the Israeli occupation: Once the PLO agreed to negotiate territory, it in effect acceded to Israel’s claim that these were somehow “disputed” rather than occupied.

At the same time, the PLO renounced its right to armed resistance. This reduced the PLO and its constituent parties, including Fatah, to an ambiguous role: neither state nor liberation movement, it stood somewhere in the middle, frozen in an “interim stage” in exchange for the promise of an “Interim Self-Government.”

The PLO had therefore left itself almost entirely at the mercy of whichever Israeli government it was negotiating with. And, whichever it was, that government was surely only concerned with its own political hinterland.

Israel’s illegal settlement project in the West Bank and Gaza Strip is perhaps the best example. What transpired almost immediately after the signing of the Declaration of Principles was a massive land grab as Israel began consolidating settlements up and down occupied territory, especially in the areas in and around Jerusalem and the Jordan Valley.

The settlement project had been planned since – some have even argued persuasively, long before – Israel seized the West Bank and Gaza in 1967. The only question for Israeli policymakers after the signing of the Declaration of Principles was which plan to follow: the military/security-oriented Alon, Drobless or Sharon plans, or that of the religiously inspired Gush Emunim (Bloc of the Faithful) movement.

The differences between them were minimal, a matter of outlook rather than content.

The former would, with variations, ensure Israeli sovereignty over: all borders, with the Jordan Valley border bolstered by settlements over an area some 20 kilometers deep, a united Jerusalem surrounded by settlements and control of most of the Judean desert, totaling some 50 percent of the territory of the occupied West Bank. The idea – the maximum land, minimum Palestinians paradigm – was to allow Palestinians limited self-rule over areas of greater Palestinian population density.

Gush Emunim advocated a settlement program everywhere, including near areas highly populated by Palestinians. The settlements around Nablus, for instance, were initiated, at first in contradiction with the Israeli government, then with its permission, by this bloc. They saw these settlements as laying a historic and religious claim to land that was unique to the Jewish people.

Either way, the settlement question was never up for negotiation with the Palestinians. It was a purely internal Israeli matter to be thrashed out between those who saw them primarily in security terms and those who saw them as an ideological and religious priority. This was barely tempered by the necessity to keep Washington on board, an effort facilitated by later weasel concepts such as “natural growth,” with which Israel would mask its settlement consolidation and expansions.

Palestinians were simply not at the table in any meaningful sense.

A long descent into despair

The peace process took the wind out of the sails of the first intifada, which had caused so much trouble for Israel. Nothing did more to undermine Israel’s carefully constructed image around the world as a state having to be in constant vigilance in a hostile neighborhood than pictures of Israeli soldiers breaking the limbs of unarmed Palestinian protesters.

That bone-breaking policy was under the orders of one Yitzhak Rabin, the man who in 1948 was responsible for the Lydda death march, yet somehow managed to reinvent himself as a man of peace as prime minister without actually changing his positions on very much at all.

The portents were there and some saw them clearly. In the words of Edward Said, who resigned from the PLO’s Executive Committee in protest, the Oslo accords and their resulting peace process were meant to be one thing and one thing only: “an instrument of Palestinian surrender.”

Even to peace process supporters, the PLO position going into the negotiations was seen and understood as thegreat compromise: settling for 22 percent of historic Palestine and being willing to negotiate what a right of return of refugees might look like. There was, and is, almost no wriggle room, little to yield in actual talks.

Israelis may have understood this or they may have not. It didn’t really matter. The imbalance of power between the two and the equally unbalanced American approach to mediation meant Israel was negotiating with itself and – on rare occasion – Washington. What the Palestinians wanted mattered little.

It matters less now, 25 years later. US President Donald Trump and his administration has made it clear that any agreement will be firmly on Israel’s terms, having shown its hand on Jerusalem and refugees. Benjamin Netanyahu, the Israeli prime minister, has made it equally clear that whatever Palestinians end up with – “state minus, autonomy plus” – it’s not sovereignty and it’s not statehood.

All the surrender needs is a signature.

Omar Karmi is a former Jerusalem and Washington, DC, correspondent for The National newspaper and associate editor of The Electronic Intifada.