Prepare For Change
Home Consciousness 10 Fun Facts about Animals and Why They Are So Different from... 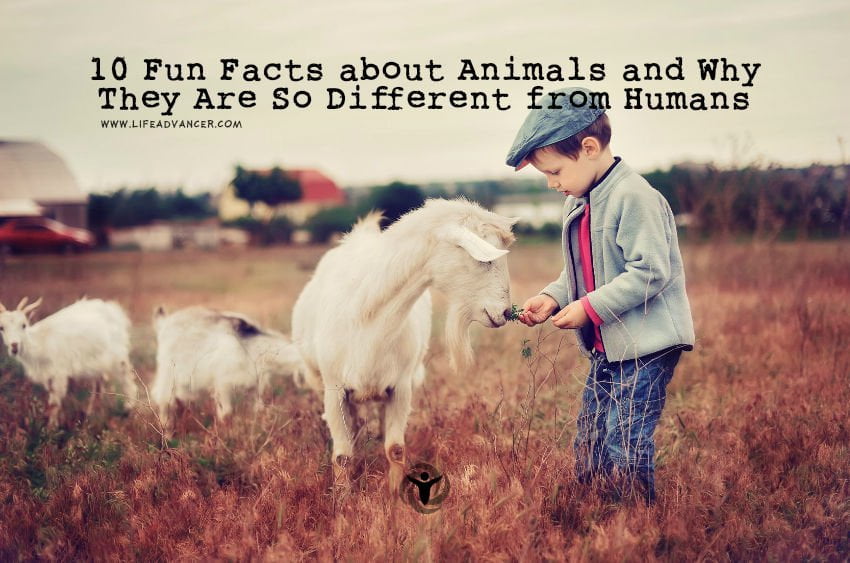 With such a diverse world to choose from, it can be hard to pick just 10 fun facts about animals.

Our world is full of the most incredible wonders and interesting species. From lizards that shoot blood from their eyes to otters who hold hands when they sleep. With so much choice, how do you narrow it down to just ten fun facts about animals?

With much deliberation, we have managed to choose our favorites.

So here are 10 fun facts about animals you wouldn’t believe:

1. Male Adelie Penguins propose with a special pebble, then marry for life

This is possibly the cutest of our fun facts about animals. As did you know it’s not just humans that propose, apparently, penguins do too? Specifically, the Adelie penguin is a species found living along the Antarctic coast. When the male finds a female it wants to pair off with for life, it searches for a distinctive pebble.

It will then present this exceptional pebble to the female. Pebbles are particularly difficult to find on the icy coast. They are prized treasured possessions. In fact, male penguins will often fight over them in order to steal pebbles from other males. If the female accepts the pebble from the male they bond and mate for life.

Barn owls are another species that bond for life, however, unlike penguins, this species sometimes get divorced. So what could cause these two lovebirds to separate? Unsuccessful chick-rearing. If the pair successfully raises a batch of chicks that fledge they’ll stick together.

However, if chick-rearing doesn’t go too well they’ll most likely split up. This could be down to the number of eggs produced, or a low rate of chick survival. And it won’t take long for the pair to call it a day.

One year of marital discord is all it takes for the pair to call it quits. Furthermore, it’s the male that usually gets to keep the nest.

3. Elephants are sociable and can feel empathy

We all know that elephants are incredibly intelligent but did you also know that these amazing creatures feel empathy? Elephants have large brains and live for a long time. In addition, they have long memories and because of this they remain closely bonded to their offspring and relatives.

On a lighter note, it was thought that only humans and certain primates were affected by tickling. However, new research suggests rats enjoy a good tickle too. Tickling serves as a means of bonding. So how do animals benefit? Primates tickle one another as a bonding method.

But why do rats like to be tickled? Rats don’t tickle one another but they do enjoy being tickled. Researchers know this for two reasons. The first is because the rats emit high-pitched chirps which are similar to human laughter. The second is that rats will run through mazes and press levers if they know that they’ll be rewarded with a tickle afterward.

5. This Jellyfish can live forever

Who wants to live forever? Well, apparently there’s a jellyfish that researchers have named ‘immortal’ that has the ability to replace its cells. The jellyfish, known scientifically as Turritopsis nutricula, measures a tiny 4 – 5mm long.

The jellyfish is able to regenerate new cells when it feels threatened, is injured or has not eaten for a long time. It finds warm oceanic waters and changes into a floating mass. The cells replicate damaged ones that need replacing.

Unsurprisingly, scientists are studying this creature to see if it can help with human aging.

6. Fish sleep and suffer from insomnia

I’ve never seen a fish take a nap, have you? But apparently, they do. This brings us onto number 6 of our fun facts about animals. Not only do fish sleep but some even suffer from insomnia, just like us humans. Zebrafish, for example, sink to the bottom of their tanks with a droopy tail when they’re asleep.

However, studies show that if they are kept awake during the night they are slow and sluggish in the morning. One particular study found that zebrafish with faulty hypocretin receptors had insomnia. Researchers kept the zebrafish awake all night then turned the lights off during the day.

They found the fish took little naps during the day to make up for lost sleep. However, keep these poor fish awake at night with the lights on and they cannot sleep.

Most of us associate reindeer with red noses, but researchers have discovered that color is also linked to their eyes. In the winter, reindeer’s eyes change from gold to blue. Scientists believe this is so that the reindeer can see better in the lower, winter light of the Arctic months.

The light in the Arctic changes dramatically. In the summer you can experience 24 hours of sunlight in a day, whereas in the winter it is in total darkness. Animals have to be adaptable in order to survive in these conditions.

Scientists found that reindeer increase the pressure inside their eyes to compress the collagen fibers of the retina at the back of the eyes. This is so that their eyes can reflect the bluer light of the winter back into the eye and over more of the light-sensitive cells.

8. Termites can teach us how to build the perfect structure

Termites are so adept at constructing the perfect buildings that architects are now studying them. These clever creatures use the environment around them and adapt it to suit their needs. These ants produce a lot of carbon dioxide.

Therefore they need buildings that suck in oxygen and exhale carbon dioxide. They achieve this by creating a complex mound of tunnels, channels, and chimneys. In the daytime, exterior tunnels warm up more rapidly than the interior ones.

As such, air (oxygen) pushes up creating a circular current that flows through the whole mound. At night the process reverses. Architects want to learn more in order to save energy and help reduce climate change.

9. Baby sand tiger sharks kill their siblings in the womb

Okay so this might not be one of our best fun facts about animals but it is pretty incredible. Imagine being attacked in the womb? This is what happens to baby sand tiger sharks. Typically, the oldest baby will turn on their brothers and sisters.

The oldest will kill and then eat all of its younger siblings. Not only that, but the baby will also eat all of the mother’s unfertilized eggs.

The reason for this? When they’ve finally finished they emerge, at a whopping size of a baseball bat. This is a pretty decent size for a sand tiger shark, meaning fewer predators and less chance of attack.

10. This parasite replaces its host’s tongue with itself

You might not class this under fun facts about animals but you have to admit, it’s pretty interesting. A parasite known as cymothoa exigua is a kind of marine louse about an inch long and eats the tongue of its host. The host, in this case, is usually the snapper fish.

The male will swim inside through the gills and mature into a female. Then it will attach onto the tongue, pierce it and suck it dry of blood.

The parasite kills the tongue and replaces it with its own body. However, the fish will continue to use the louse as its own tongue. Pretty gruesome.