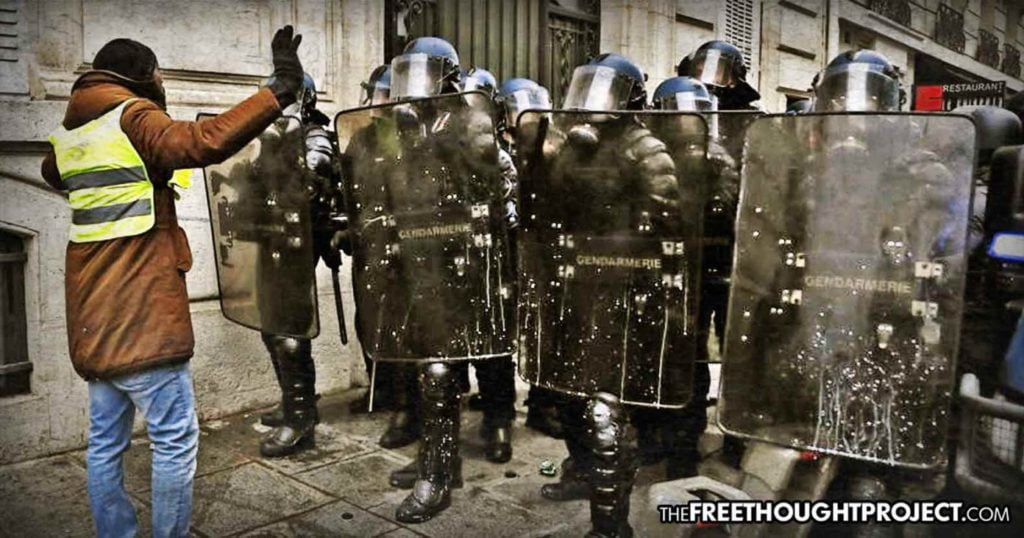 As the “gilets jaunes” or “yellow vests” protests continue to take place across France, the government has been slowly acquiescing to the demands of citizens. However, the concessions have not been enough and so they’ve stayed in the streets although mostly calm. Also in the streets are the French police, who, according to reports, are also growing weary with the French state.

The protests have been ongoing for around a month now and the police force is tiring out—and they aren’t getting paid for it. Police in France have racked up a massive 23 million hours of overtime as they work protests and not a single one of them have been paid for it.

Once the union realized that their officers were not being paid the money they were owed, the Alliance Union called on officers across France to only handle emergencies only as they negotiated with the interior ministry over their compensation.

On Wednesday, activists called on police to cross the line and join them. Police did not rule this option out and they went so far as to threaten the French government with doing just that.

Negotiations between three unions—Alliance, UNSA-Police and Unity-SGP-FO—and Interior Minister Christophe Castaner on Tuesday failed to reach a settlement, according to Newsweek.  As talks resumed on Wednesday, France 24 reported that activists were calling on forces across the country to commit to a “slowdown” and only respond to emergencies until the dispute had been settled.

The slowdown took place and yet the government still failed to address their concerns. So, police held a “black day for the police” protest on Wednesday. Now, they are threatening Act II, and even Act III. Using the term ‘Act’, the police are aligning themselves with the yellow vests as this is a similar tactic used in the current demonstrations.

“Despite our repeated appeals to the President of the Republic to announce an emergency plan for the security forces, so far nothing has been said,” the union said this week.

The Interior Minister, Christophe Castaner claims that paying the officers what they are owed will “take time” and finding the money isn’t easy.

“It is in a spirit of dialogue and mutual trust that we will provide concrete responses to our security forces,” he said.

However, the police do not appear to be buying into the rhetoric and a “blue vest” protest now appears to be imminent.

Although many police officers and protesters have been clashing—often violently—over the past few weeks, many of the officers have found compassion for the yellow vests.

“Most cops have ‘yellow vests’ among their close circles or at least people who sympathize with the movement, it’s not easy to be on the other side of the barricade every day,” a police source told Le Monde newspaper.

Backing up this notion is the fact that police have been seen on video removing their helmets and joining in with the yellow vests in solidarity.

As TFTP reported earlier this month, despite the violence, many of the police officers in France understood the anger coming from the citizens. Instead of clashing with the peaceful protesters, many of the officers were seen joining them in solidarity.

In at least two different cases, police were seen on video removing their helmets to show the people that they were on their side.

In both cases the protesters erupted with applause and began singing La Marseillaise, the national anthem of France.

When the enforcement arm of the state—the police—refuse to obey their masters, and instead join the citizens they once oppressed, a revolution is at hand. The irony of police revolting after not being paid to act as the enforcement arm of the state—to quell dissent among the citizens—is golden, and hopefully it leads to a “blue” revolution in which police go back to protecting the people, instead of their masters.

Game Changer: French Police to Join Yellow Vests After Finding Out Gov’t is Ripping Them Off Too