Prepare For Change
Home ARCONTES Growing US Public Support for One State Shared Equally by Israelis and... 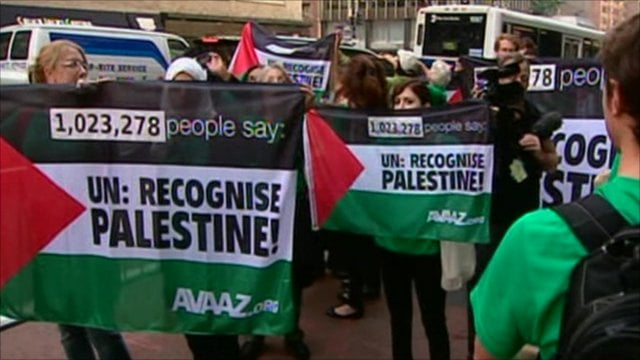 Two years of Donald Trump and Benjamin Netanyahu as a Middle East peacemaking team appear to be having a transformative effect – and in ways that will please neither of them.

The American public is now evenly split between those who want a two-state solution and those who prefer a single state, shared by Israelis and Palestinians, according to a survey published last week by the University of Maryland.

And if a Palestinian state is off the table – as a growing number of analysts of the region conclude, given Israel’s intransigence and the endless postponement of Mr Trump’s peace plan – then support for one state rises steeply, to nearly two-thirds of Americans.

But Mr Netanyahu cannot take comfort from the thought that ordinary Americans share his vision of a single state of Greater Israel. Respondents demand a one-state solution guaranteeing Israelis and Palestinians equal rights.

By contrast, only 17 per cent of Americans expressing a view – presumably Christian evangelicals and hardline Jewish advocates for Israel – prefer the approach of Israel’s governing parties: either to continue the occupation or annex Palestinian areas without offering the inhabitants citizenship.

All of this is occurring even though US politicians and the media express no support for a one-state solution. In fact, quite the reverse.

The movement to boycott Israel, known as BDS, is growing on US campuses, but vilified by Washington officials, who claim its goal is to end Israel as a Jewish state by bringing about a single state, in which all inhabitants would be equal. The US Congress is even considering legislation to outlaw boycott activism.

And last month CNN sacked its commentator Marc Lamont Hill for using a speech at the United Nations to advocate a one-state solution – a position endorsed by 35 per cent of the US public.

There is every reason to assume that, over time, these figures will swing even more sharply against Mr Netanyahu’s Greater Israel plans and against Washington’s claims to be an honest broker.

Among younger Americans, support for one state climbs to 42 per cent. That makes it easily the most popular outcome among this age group for a Middle East peace deal.

In another sign of how far removed Washington is from the American public, 40 per cent of respondents want the US to impose sanctions to stop Israel expanding its settlements on Palestinian territory. In short, they support the most severe penalty on the BDS platform.

And who is chiefly to blame for Washington’s unresponsiveness? Some 38 per cent say that Israel has “too much influence” on US politics.

That is a view almost reflexively cited by Israel lobbyists as evidence of anti-semitism. And yet a similar proportion of US Jews share concerns about Israel’s meddling.

In part, the survey’s findings should be understood as a logical reaction to the Oslo peace process. Backed by the US for the past quarter-century, it has failed to produce any benefits for the Palestinians.

But the findings signify more. Oslo’s interminable talks over two states have provided Israel with an alibi to seize more Palestinian land for its illegal settlements.

Under cover of an Oslo “consensus”, Israel has transferred ever-larger numbers of Jews into the occupied territories, thereby making a peaceful resolution of the conflict near impossible. According to the 1998 Rome Statute of the International Criminal Court, that is a war crime.

Fatou Bensouda, the chief prosecutor of the court in The Hague, warned this month that she was close to finishing a preliminary inquiry needed before she can decide whether to investigate Israel for war crimes, including the settlements.

The reality, however, is that the ICC has been dragging out the inquiry to avoid arriving at a decision that would inevitably provoke a backlash from the White House. Nonetheless, the facts are staring the court in the face.

Israel’s logic – and proof that it is in gross violation of international law – were fully on display this week. The Israeli army locked down the Ramallah, the effective and supposedly self-governing capital of occupied Palestine, as “punishment” after two Israeli soldiers were shot dead outside the city.

The Netanyahu government also approved yet another splurge of settlement-building, again supposedly in “retaliation” for a recent upsurge in Palestinian attacks.

But Israel and its western allies know only too well that settlements and Palestinian violence are intrinsically linked. One leads to the other.

If Palestinians resist such restrictions or their own displacement, if they assert their rights and their dignity, clashes with soldiers or settlers are inescapable. Violence is inbuilt into Israel’s settlement project.

Israel has constructed a perfect, self-rationalising system in the occupied territories. It inflicts war crimes on Palestinians, who then weakly lash out, justifying yet more Israeli war crimes as Israel flaunts its victimhood, all to a soundtrack of western consolation.

The hypocrisy is becoming ever harder to hide, and the cognitive dissonance ever harder for western publics to stomach.

In Israel itself, institutionalised racism against the country’s large minority of Palestinian citizens – a fifth of the population – is being entrenched in full view.

Last week Natalie Portman, an American-Israeli actor, voiced her disgust at what she termed the “racist” Nation-State Basic Law, legislation passed in the summer that formally classifies Israel’s Palestinian population as inferior. 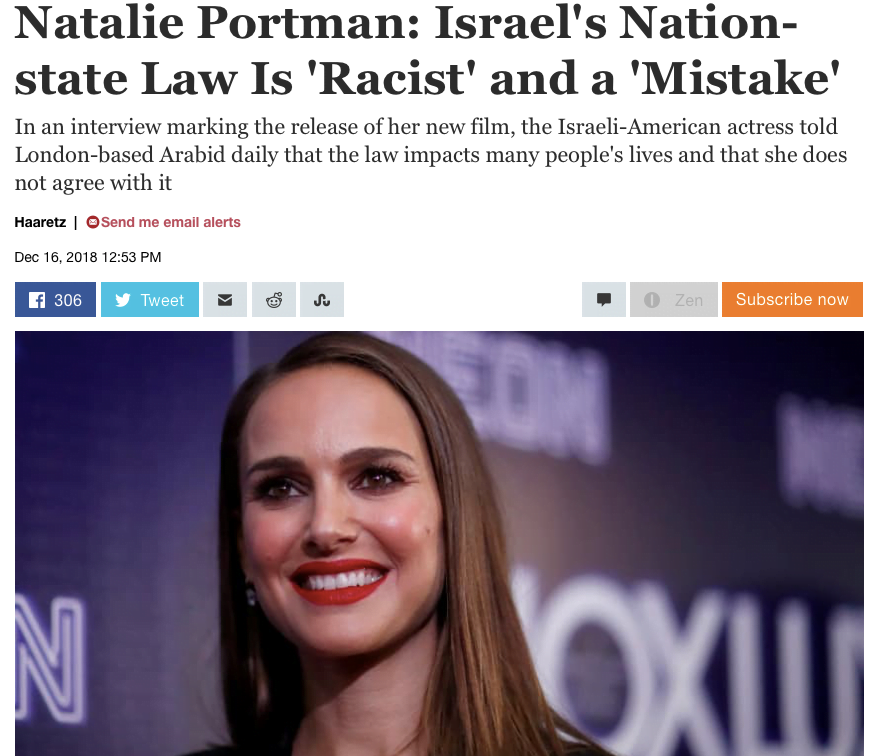 Yair Netanyahu, the prime minister’s grown-up son, voiced a sentiment widely popular in Israel last week when he wrote on Facebook that he wished “All the Muslims [sic] leave the land of Israel”. He was referring to Greater Israel – a territorial area that does not differentiate between Israel and the occupied territories.

In fact, Israel’s Jim Crow-style policies – segregation of the type once inflicted on African-Americans in the US – is becoming ever more overt.

A bill to reverse this trend, committing Israel instead to “equal political rights amongst all its citizens”, was drummed out of the parliament last week by an overwhelming majority of legislators.

Americans, like other westerners, are waking up to this ugly reality. A growing number understand that it is time for a new, single state model, one that ends Israel’s treatment of Jews as separate from and superior to Palestinians, and instead offers freedom and equality for all.

A version of this article first appeared in the National, Abu Dhabi.

Jonathan Cook won the Martha Gellhorn Special Prize for Journalism. His books include “Israel and the Clash of Civilisations: Iraq, Iran and the Plan to Remake the Middle East” (Pluto Press) and “Disappearing Palestine: Israel’s Experiments in Human Despair” (Zed Books). His website is www.jonathan-cook.net. He is a frequent contributor to Global Research.