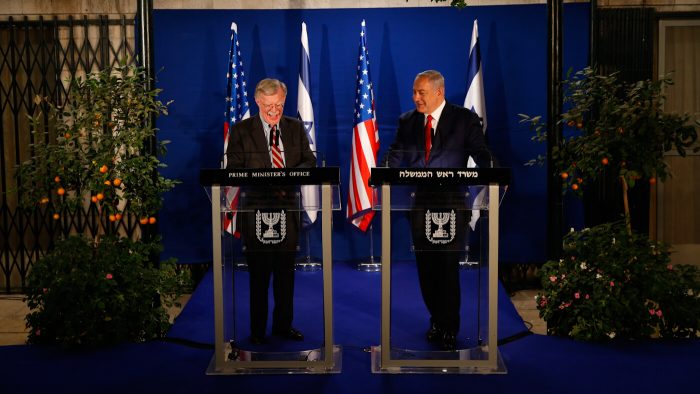 Understanding the significance of the Golan Heights is in many ways key to understanding why the Syrian conflict was engineered by NWO foreign powers in the first place. 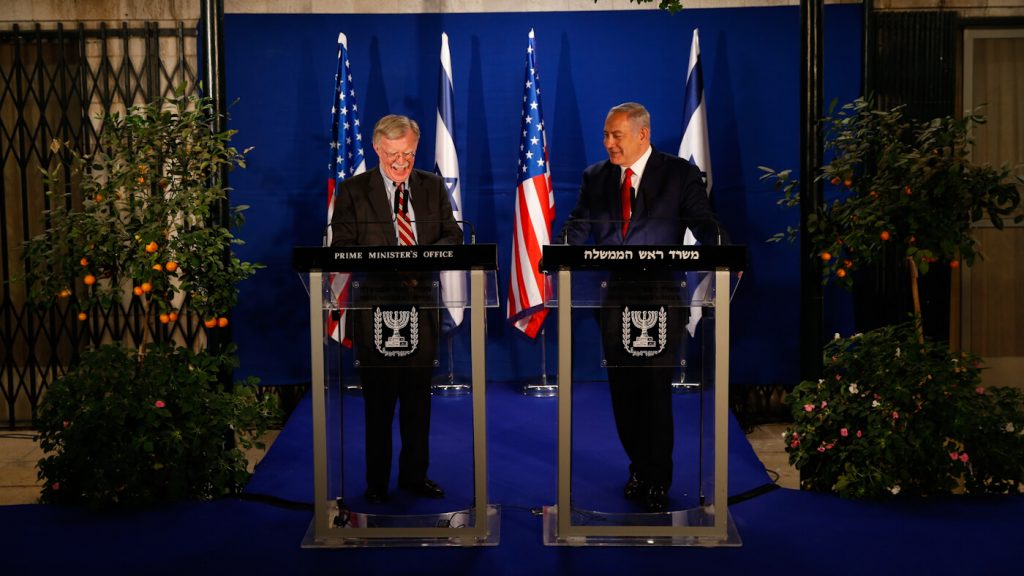 TEL AVIV, ISRAEL — The state of Israel seems to share at least some of the responsibility for the latest shift of U.S. Syria policy — as National Security Adviser John Bolton announced on Sunday that President Donald Trump’s call to withdraw U.S. troops from Syria would now be “coordinated” with Israel, after meeting with top Israeli officials including Israeli Prime Minister Benjamin Netanyahu.

Israel’s main motivation in preventing a swift U.S. exit from Syria was also made explicit by Netanyahu, who openly stated on Twitter that Israel’s push to obtain sovereignty over the occupied Golan Heights – which is internationally recognized as part of Syria – was the driving factor behind Israel’s recent efforts to dramatically slow down Trump’s plan for an “immediate” withdrawal of U.S. troops currently occupying Syrian territory illegally.

As MintPress noted at the time of Trump’s withdrawal announcement, Israel’s influence on Trump’s Middle East policy and Israel’s push towards containing “Iranian influence” in Syria would mean that Trump’s plan to withdraw troops over the alleged defeat of ISIS would likely never materialize if it was opposed by Tel Aviv.

This was apparently and not surprisingly the case as, soon after Trump’s announcement that he planned to bring U.S. troops home from Syria last month, Israel’s government announced that it would dramatically rev up its direct involvement in the Syrian conflict in the U.S.’ absence. That involvement had so far been limited to hundreds of unilateral airstrikes on Syrian government and military targets over the course of the nearly eight-year-long war. Israel’s threat of escalation revealed Israel’s unwillingness to see foreign pressure on Damascus reduced.

Israel’s military — currently headed by Netanyahu, who is also serving as Israel’s defense minister — made good on this promise to increase its military involvement in Syria soon after, using civilian airplanes as cover to launch airstrikes on Syria on Christmas Day.

However, Israel’s reaction to Trump’s announcement appears to have been much more extensive than its decision to increase its airstrikes targeting Syrian territory. After meeting with Netanyahu and the director of Israeli intelligence, Bolton noted on Twitter that the “U.S. drawdown in Syria” would now be “coordinated” with Israel. Also on Sunday, Bolton announced that the U.S. had no timetable for troop withdrawal from Syria and that the troop withdrawal was also conditional.

I met w/ PM @netanyahu, the Director of Mossad, & the Israeli Atomic Energy Commissioner. Discussions included our ongoing efforts to expand & enhance our historic partnership w/ Israel, our mutual response to the threat from Iran, & the coordinated U.S. drawdown in Syria.

This is just the latest indication that the state of Israel is acquiring unprecedented influence over U.S. troop deployments in the region, as the commander of U.S. European Command (EURCOM) noted last year that Israeli generals — not American generals — have the power to deploy U.S. troops to Israel to fight on Israel’s behalf. Now, Bolton — after meeting with Israeli officials — has stated that Israel’s government will also wield tremendous influence over whether or not U.S. troops will be leaving Syria.

Spotlight on the Golan Heights

In publicly discussing his meeting with Bolton on Twitter, Netanyahu noted that a key topic of ongoing discussion with Bolton regarding Syria would involve Israel’s claim to the Golan Heights, a plateau bordering Israel, Lebanon and Syria that Israel has occupied since 1967 and later annexed in 1981.

Netanyahu announced that he and Bolton would be traveling together to the area on Monday and added:

The Golan Heights is tremendously important for our security. When you’re there you’ll be able to understand perfectly why we’ll never leave the Golan Heights and why it’s important all countries recognize Israel’s sovereignty over it.”

And you have backed Israel's right to defend itself which we exercise constantly. It's important to know that we have the backing of our great friend and ally the United States of America. pic.twitter.com/OCxnqYS6d8

As MintPress has noted in the past, understanding the significance of the Golan Heights is in many ways key to understanding why the Syrian conflict was engineered by foreign powers in the first place. This is because, with the Golan Heights in mind, Israel hatched a plan in 2006 to overthrow Syrian President Bashar al-Assad by creating sectarian strife in the country with the hopes that whoever succeeded Assad would be willing to relinquish Syria’s claim to the territory.

Yet, this plan was never designed to be enacted by Israel but instead by the United States. The U.S. eventually adopted the plan and the communications of former Secretary of State Hillary Clinton revealed it was a driving factor in U.S. policy leading up to the genesis of the Syrian conflict. One of her leaked emails, published by WikiLeaks, stated that “the best way to help Israel deal with Iran’s growing nuclear capability is to help the people of Syria overthrow the regime of Bashar Assad.”

That same email also noted that “a successful intervention in Syria would require substantial diplomatic and military leadership from the United States.” It added that “arming the Syrian rebels and using Western air power to ground Syrian helicopters and airplanes is a low-cost high-payoff approach.”

Unsurprisingly, official recognition of Israel’s annexation of the Golan was prominent among the regime-change promises touted by Syrian “rebels.” Over the course of the war, rebels have,  in their bid to overthrow Assad, offered to “trade” or sell the Golan Heights to Israel in exchange for military aid or an Israeli-imposed “no-fly zone.”

This also helps explain why Israel was so eager to fund, arm and aid “rebel” groups along the Syria-Israel border, as it offered the justification for the Israeli occupation of a “buffer zone” that, according to Syrian opposition sources and Israeli-American NGOs, was “intended to keep the Syrian army and its Iranian and Lebanese allies as far away from Israel’s border as possible, as well as solidify Israel’s control over the occupied Golan Heights.” However, the success of the Syrian military’s efforts in southern Syria forced Israel to abandon its buffer zone and seek other means to strengthen its claim to the territory.

The Golan: What’s in it for Israel?

Israel created this plan to weaken or overthrow the Syrian state largely because it is eager to cement its claim to the Golan Heights. In order to accomplish that, regime change in Syria is essential, as the international community still refuses to recognize Israel’s seizure and continued occupation of the Golan as legal. This bars Israel from commercially developing the area’s rich resources, which explains Israel’s willingness to go to war over a seemingly small and insignificant tract of land. However, a new Syrian government, one more “friendly” to Israeli interests, could officially relinquish Syria’s claim to the Golan, paving the way for the complete and official annexation of the territory by Israel.

At the time the plan was created, the main motivator for Israel was the Golan’s freshwater reserves, as the Golan is one of three sources of freshwater available to the Israeli state — and is the largest in size and most abundant, as it includes the mountain streams that feed Lake Kinneret (the Sea of Galilee) and the headwaters of the Jordan river.

This makes this area even more important to Israel, given that Israel is in its sixth year of a drought so massive that a NASA study called it the worst drought in the region in nearly 900 years. Thus, the water resources of the Golan Heights are essential to Israel’s existence as well as its expansionist ambitions. 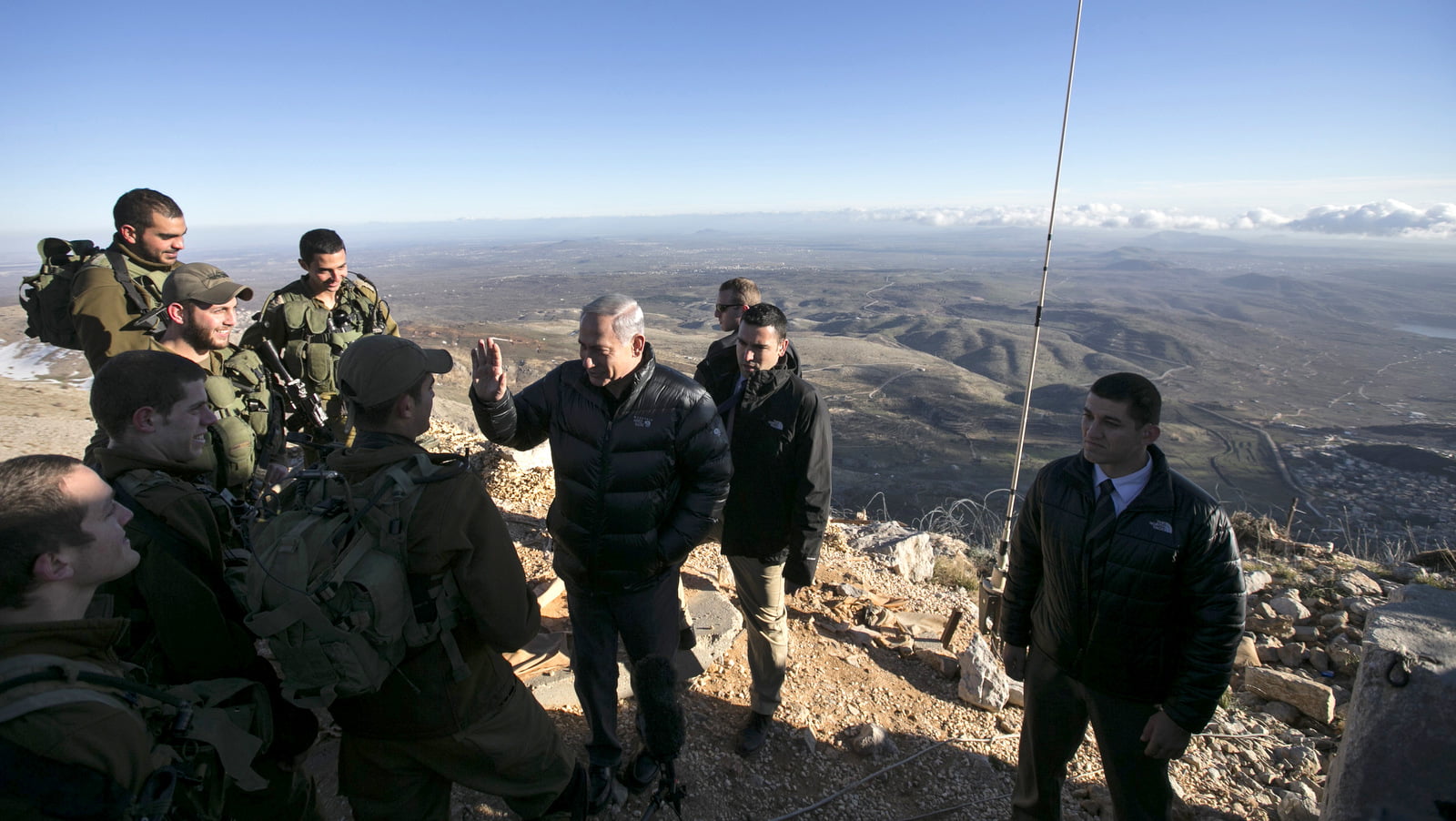 Though recent Israeli investment in desalination plants have since reduced its dependence on Golan water resources, the discovery of oil in the Golan in 2015 dramatically strengthened Israel’s resolve to gain complete sovereignty over the occupied territory.

The oil reserve discovered in the Golan Heights is estimated to contain “billions of barrels” of crude oil that could turn Israel – which currently imports the vast majority of its fuel – into a net oil exporter. Yet, because the Golan Heights are internationally recognized as being under occupation and not an official part of Israel, the commercial extraction and export of this vast oil reserve cannot move forward — until this status changes.

As a result, only exploratory wells have been drilled, mostly by a division of Genie Energy Co., a U.S.-based oil company connected to Rupert Murdoch, Jacob Rothschild, Dick Cheney and former CIA Director James Woolsey, among other powerful individuals in the U.S. and the U.K. The involvement of such influential figures in future oil extraction endeavors in the Golan Heights – dependent as they are on Israel acquiring sovereignty over the territory — likely explains why the U.S., as well as the U.K., has been so willing to help initiate and then perpetuate the Syrian conflict, which is soon to enter its eighth year.

While Netanyahu’s statements show that the Golan Heights is a key driver for Israel in its refusal to let the Syrian conflict wind down, it is important to note that Israel and its allies abroad are also interested in the partitioning of Syria in order to keep the country weak and conflict-ridden for the foreseeable future. This call to partition Syria as well as other countries in the region, such as Iraq, dates back to the Yinon Plan that was developed in 1982 and seeks to partition and weaken other regional states through the engineering of sectarianism, in order to allow Israel to emerge as the region’s sole superpower.

This is worth pointing out, given Israel’s recent effort to take control of the U.S. troop pull-out (or lack thereof) from Syria, as the U.S. State Department is also promoting a plan as of this past weekend that would push for the partition of northeastern Syria were U.S. troops to begin to withdraw from Syrian territory.

Thus, the announcement that the troop “withdrawal” will now be coordinated with Israel and that the U.S.’ new policy for northeastern Syria will involve partition shows that another “America First” Trump policy has quickly morphed instead into an “Israel First” plan.