Prepare For Change
Home ARCONTES U.S. Police Under Pressure to End Their Relationship With Israel 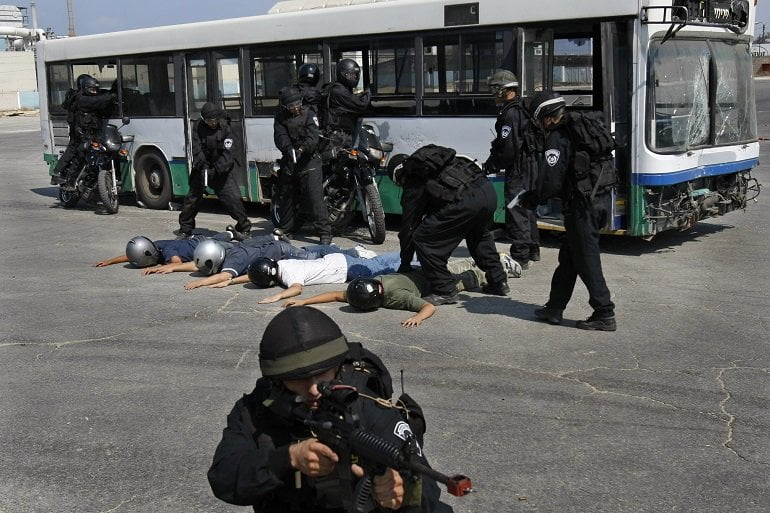 Police departments have been sending their leaders to Israel to learn about the country’s counterterrorism strategies since the 1990s. But growing opposition is pushing some to rethink these exchange programs.

Members of an Israeli police SWAT team during a training exercise for U.S. police officials organized by the Anti-Defamation League. (AP/Bernat Armangue)

When the International Olympic Committee announced that Atlanta would host the 1996 Summer Olympics, security for such a massive event was an immediate concern.

As part of their preparation, local police traveled to Israel to learn about its security and counterterrorism strategies. In May alone, Israel saw a total of 684 “terrorist events,” according to an Israeli government website. By contrast, since 1980, there have been 11 notable terrorist attacks with fatalities on American soil.

“It’s an art over there,” says counterterrorism expert Maria Haberfeld, a professor at John Jay College of Criminal Justice and a former member of the Israeli Defense Forces. “If you’re dealing with this for so many decades, then there is definitely expertise.”Since the Atlanta Games, nonprofits and private companies around the United States have sponsored law enforcement exchanges with Israel. Dozens of U.S. police departments, including those in Boston, Chicago, New York City and Washington, D.C., have either sent representatives to Israel or hosted Israeli police members to share their experiences.

Georgia State University criminologist Robert Friedmann — who was raised in Israel and launched the Georgia International Law Enforcement Exchange (GILEE) to help police secure the Atlanta Games — says these exchange programs provide an opportunity for U.S. police to learn counterterrorism prevention and response from a country with significantly more experience.

But critics of these programs, which include human rights groups, view them as a problematic sanctioning of the country’s treatment of Palestinians.

“We think these exchange programs are really harmful. We think they are harmful in lifting up and valorizing Israeli occupation,” says Stefanie Fox, deputy director at the Jewish Voice for Peace (JVP). “We don’t think [U.S.] officials need to be learning tips and techniques from occupying security forces.”

JVP argues that the relationship with Israel has negative consequences for minority groups in the U.S. and will exacerbate mass surveillance, racial profiling and use of force.

“They make the causal attribution that participation in this program teaches police to kill and oppress minorities,” he says. “That doesn’t offend my Jewishness, it offends my intelligence.”

But the JVP’s efforts are having some success.

While Vermont Police spokesman Adam Silverman says the summit was helpful for a previous police leader, when members of the community expressed concerns with this year’s trip, the department “agreed that it would be in the best interests of the Vermont State Police for Col. Birmingham to withdraw his participation.”

“It’s a very divisive issue,” she says. “[We] decided that it is in the best interest of the community to not attend.”

Jazmynne Williams, a member of the Demilitarize Durham2Palestine campaign that petitioned the North Carolina city, says it’s important to recognize the troubled racial history of U.S. policing in addition to Israeli-Palestinian relations when considering how such a program would affect residents.

But Steve Pomerantz, a former FBI assistant director and current homeland security director for the Jewish Institute for National Security of America (JINSA), believes these critics are conflating the issues of policing and militarization. Since 2002, Pomerantz has overseen annual Israel trips with about 15 U.S. law enforcement leaders. He says the program does not teach military tactics but focuses on sharing information for how Israel “organizes and responds to terrorism.”

David Friedman of the Anti-Defamation League also disputes any connection between the exchange programs and military strategy. But a 2016 itinerary for an ADL Israel trip includes meetings with Israeli border police, a security briefing at Ben-Gurion International Airport, and briefings with current and former representatives of the Israeli Defense Forces — the country’s military unit.

Friedman says U.S. participants in these programs have given “incredibly positive feedback.”

Henry Stawinski, police chief for Prince George’s County, Md., has completed a number of international exchange programs. Whether they take place in Israel or elsewhere, he says they help to “cultivate a broader perspective.” In particular, he says he found value in learning about crowd management and security considerations for a transient metropolitan area. (Prince George’s County is part of the Washington, D.C., region.)

Gil Kerlikowske, a former Seattle police chief and commissioner of U.S. Customs and Border Protection, participated in JINSA’s Israel trip. He says the discussions “were quite technical about suicide bombings and identification” as well as evidence collection. Not long after Kerlikowske returned to the U.S., a shooting at the Seattle Jewish Federation in 2006 left one person dead and five injured.

“[The program] was particularly helpful in dealing with mass casualties,” he says.

Interest among police departments has increased over the years, according to directors of police exchanges. But as law enforcement agencies continue to face public pressure to sever their ties to Israel, Haberfeld says U.S. police departments need to balance terrorism-fighting strategies with what’s best for the public interest. Haberfeld cautions against “blindly” implementing tactics from other countries.

“There are things that can be learned, but they always have to be in the context of the legal system in a given country,” she says. “It’s a combination of looking at what works and determining at what price.”