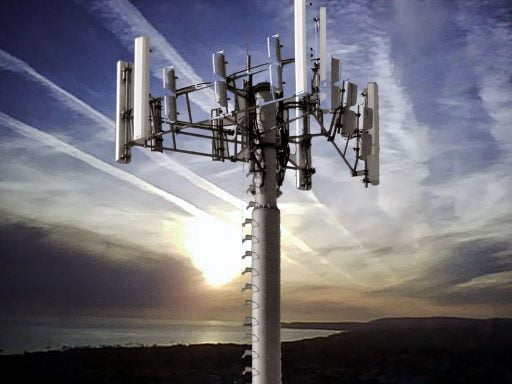 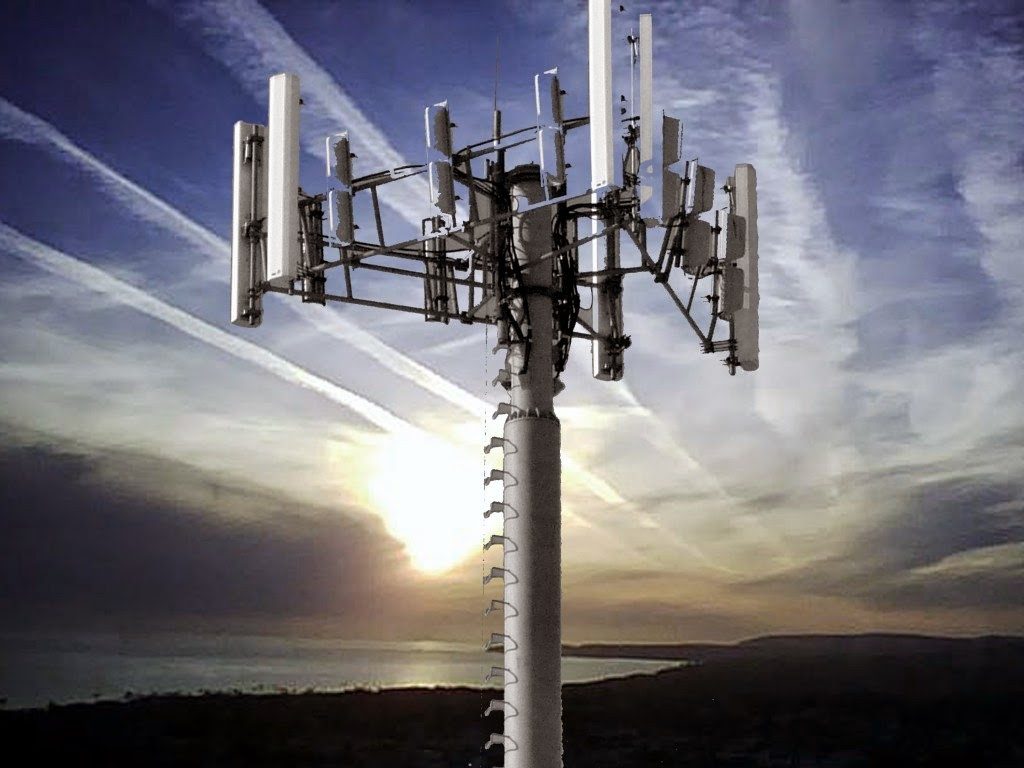 Today’s New Manhattan Project (chemtrails) involves the electromagnetic manipulation of atmospheric particles. A company called Dresser Industries has historically been the leader in this scientific field for a very long time. Their company history goes back to the late 1800s and they have long since been at this field’s forefront.

Not only that, but Dresser Industries has a history of working with organizations heavily associated with the New Manhattan Project.

To top it all off, it’s a Bush family business with Nazi connections.

WE HAVE A BINGO OVER HERE!!!

In the early 1800s M. Hohlfield of Leipzig University demonstrated the effect by clearing smoke from the inside of a glass jar with an electrified wire.

In the late 1800s commercial possibilities for the field arose with the work of Sir Oliver Lodge (1851-1940). Lodge applied electrical precipitation to the recovery of valuable substances hitherto gone ‘up in smoke’ as one might say. Before Lodge’s inventions, significant quantities of valuable materials such as potash, lead, tin, and gold were lost during industrial processes. If the process involved vapors arising from the substance, then Lodge invented ways of positioning electrically charged wires which would attract the vaporized substances and simultaneously purify the air. It was a win win. The industrial producers recovered significant quantities of materials and the factory workers and general public enjoyed cleaner air. In order to commercialize his processes, Lodge formed his own company called the Lodge Fume Deposit Company.

Lodge created another endeavor called the Agricultural Electric Discharge Company. Here Lodge applied the field of electrical precipitation to agriculture and the atmospheric sciences. He found that electrical precipitation can be used to eliminate low-lying fogs, mists, and smoke that can interfere with plant growth. This phenomenon is well documented in the historical weather modification literature. Separately, he also found that spacing electrically charged wires out over a field can increase agricultural production by almost 50%!

While Lodge was doing his things over in jolly old England, in America a man by the name of Dr. Frederick Gardner Cottrell (1877-1948) was working in the same areas. In 1922 Cottrell’s company, the International Precipitation Corporation of America, made an agreement with Lodge and his companies to share patents and technical information. The resulting company was known as Lodge-Cottrell Ltd.

Lodge-Cottrell went on to install their equipment in industrial plants all over the world. Its products were used to clean both air and water.

In 1972 Dresser Industries acquired Lodge-Cottrell and it became a division of Dresser known as Environmental Systems.

Further, Dresser Industries maintained a division in Santa Ana, CA called the Environmental Technology Division which, according to their official company history, “carried out research in air, water, and solid waste pollution abatement, and advised the company on all environmental concerns.” The former director of Stanford Research Institute’s Southern Laboratories, a man by the name of Dr. Robert D. Englert ran the division.

Further still, Dresser Industries has many connections to the New Manhattan Project. First of all, Dresser’s Pacific Pump Works produced equipment which enabled the scientists of the original Manhattan Project to refine the uranium used in the world’s first atomic bombs.

Dresser’s division known as Dresser Electronics also did work at New Mexico’s White Sands Missile Range; the site of the world’s first atomic bomb blast and the original home of the most significant group of former Nazi scientists working with General Electric in areas relevant to the NMP.

Many of Dresser’s top executives came from the Massachusetts Institute of Technology (MIT); an institution with only the most significant implications for the New Manhattan Project.

Something called the LTV Tower, which sits next to the giant Dresser Building in downtown Houston, was acquired by Dresser in 1975. LTV stands for Ling Temco Vought. Around 1970 Ling Temco Vought created an entity known as LTV Electrosystems. LTV Electrosystems for a long time had a key player in the development of the New Manhattan Project on its board of directors; a man by the name of William Raborn. Raborn is well known to readers of this work. LTV Electrosystems went on to become E-systems. E-systems built the first version of the world’s most powerful and versatile ionospheric heater, HAARP; the High-Frequency Active Auroral Research Project. An extensive network of ionospheric heaters (possibly including HAARP) are used today to manipulate the weather as part of the New Manhattan Project.

Dresser is still around today.  They are now known as Dresser-Rand a Siemens Business. Siemens is a former Nazi company. The author has already written significantly about significant Nazi connections to the New Manhattan Project and there is much more convincing evidence on the way.

Way back in 1928 the Bush family bank bought Dresser. At the time Dresser was a moderately large and successful business mostly engaged in oilfield production and distribution equipment. Senator Prescott S. Bush (grandaddy Bush) and his cronies from W. A. Harriman and Company turned it into an international behemoth. Granddaddy Bush later passed his regard for Dresser onto his son, George H. W. Bush (Bush Sr.). As we all know, Bush Sr. is now dead. Perhaps Dresser’s mantle has since been passed to George W. Bush (Bush Jr.). 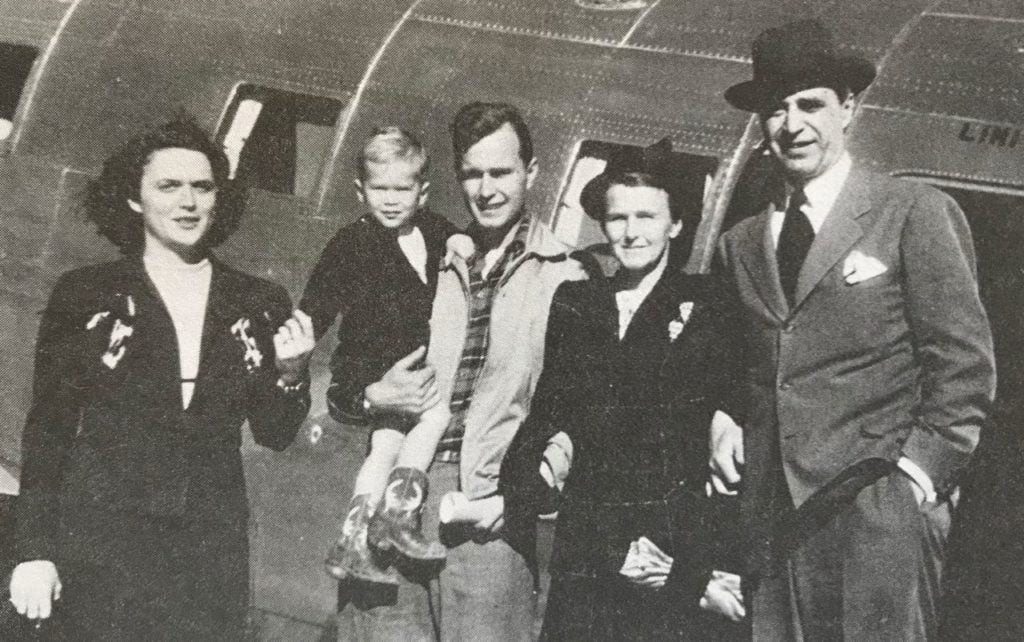 Three generations of Bushes in front of a Dresser aircraft

Brown Brothers Harriman is a bank known to have done substantial business with Nazi Germany.

Among many other Bush family/Nazi connections, in 1942, 10 months after the United States officially entered WWII, under the Trading with the Enemy Act, the U.S. government took over the Union Banking Corporation of which granddaddy Bush was a director. Three of the shareholders who had their shares seized were Nazis. Two other businesses associated with the Union Banking Corporation were also seized. The following month, the Nazi interests invested in the Silesian-American Corporation, a company long managed by Prescott Bush, were seized as well.

It gets darker. Roger Stone, in his book Jeb! And the Bush Crime Family asserts that old granddaddy Bush was getting his hands very dirty in Nazi Germany. Stone writes, “According to a Dutch intelligence agent, Prescott Bush managed a portion of the slave labor force from Auschwitz.”

Dresser Industries may be the most central company to the entire history of the operational development of the New Manhattan Project.

In his article “Chemtrails Exposed: A History of the New Manhattan Project,” your author noted way back in 2015 that Lodge was the originator of the field.

The field of electrostatic precipitation is directly applicable to early experiments in the vein of the New Manhattan Project called ‘space charge experiments.’ The author has previously written about these space charge experiments which involve dispersed atmospheric particles and long, thick electrified wires strung from the tops of telephone pole-like poles. A key New Manhattan Project scientist by the name of Bernard Vonnegut (1914-1997) worked in this area extensively. 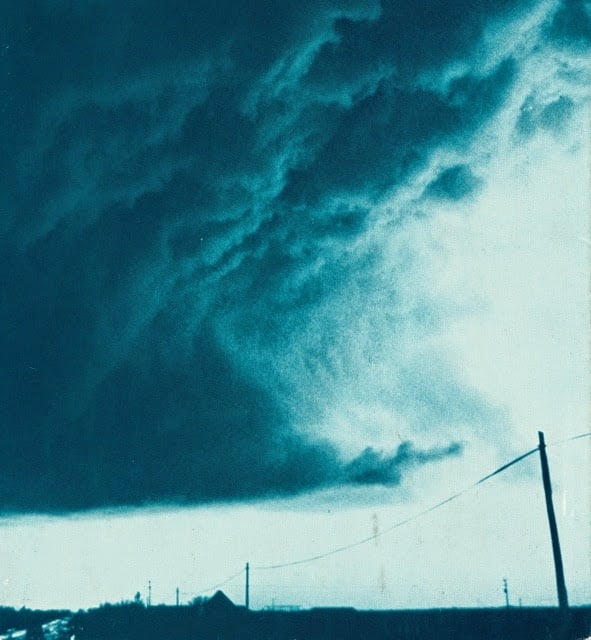 Dresser’s headquarters have historically been in Houston, TX. The same place from whence Enron came. Enron first developed the weather derivatives market where one can make a wager on almost any type of geophysical condition. The New Manhattan Project can manipulate virtually any type of geophysical condition. What a money-maker! We know what happened to the Bush family-friendly Enron.

Who would have thought that such a boring company like Dresser Industries could have such an important role in the biggest scientific effort ever?

This is how the New Manhattan Project exists. It hides at the same time in plain sight, and yet, like a misplaced set of keys, the last place that you would think to look.

You see, the establishment wants us to always look down, never up. According to them, people should not be so powerful.

The author’s problem was that he hadn’t properly wrapped his head around the fact that there is so much evil in the world.

The author found this information about Dresser today and immediately decided to write an article about it. The author could have inserted this new information into his upcoming article “Chemtrails Exposed: The Deep State and the New Manhattan Project,” but this information is too important and too complex to be stuffed into an already long and complex article.

Chemtrails Exposed: A New Manhattan Project a book by Peter A. Kirby, self-published, 2016

Initiative in Energy: The Story of Dresser Industries a book by Darwin Payne, published by Simon and Schuster, 1979

Wall Street and the Rise of Hitler a book by Antony Sutton, published by Buccaneer Books, 1976

Blowback: The First Full Account of America’s Recruitment of Nazis, and its Disastrous Effect on Our Domestic and Foreign Policy a book by Christopher Simpson, published by Weidenfeld and Nicholson, 1988

Jeb! And the Bush Crime Family: The Inside Story of an American Dynasty a book by Roger Stone and Saint John Hunt, published by Skyhorse Publishing, 2016

“Chemtrails Exposed: A History of the New Manhattan Project” an article by Peter Kirby, published by Activist Post, Feb. 17, 2015

To be among the first to be informed of his upcoming article ‘Chemtrails Exposed: The Deep State and the New Manhattan Project,’ sign on to his email list at his website peterakirby.com.