Prepare For Change
Home Awakening 12 Secrets of Life Expectancy in Japan and What We All Can... 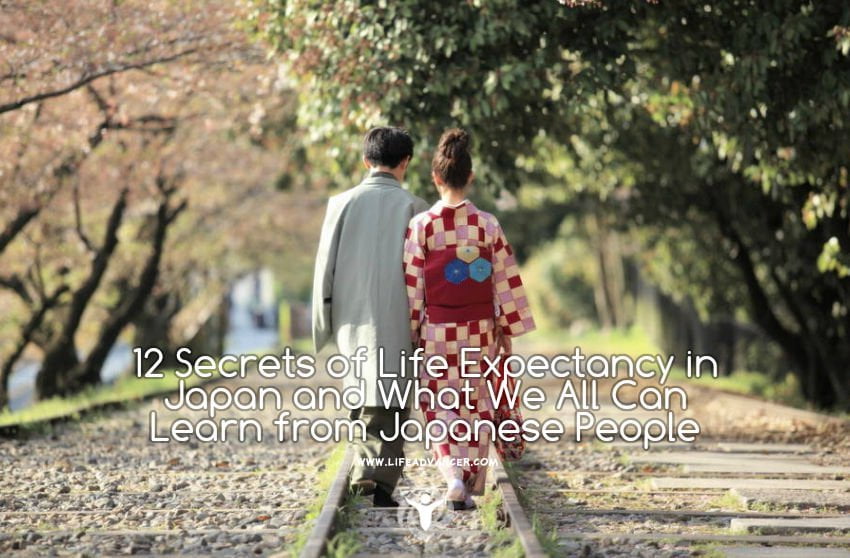 We know that the people of Japan have excellent track records for old age. What’s behind the long life expectancy in Japan?

The Japanese have longevity tricks that are commonsensical and easy to emulate. We share the secrets of the long life expectancy in Japan with you.

Life Expectancy in Japan and Longevity

The Japanese seem to have the answers to longevity. The Japanese are at the top of the charts when it comes to long life expectancy, with the average lifespan at 83,7 years.

Okinawa had the longest life expectancy in Japan for about three decades. That has since declined, owing to the introduction of fast food. It has since dropped to 28 out of 47. Many attribute it to the Okinawa diet.

12 Secrets To A Long Life Expectancy In Japan

Positive lifestyle habits might explain this phenomenon. Here’s what the Japanese do to live such long lives.

1. They Eat Their Veggies

First of all, the Japanese diet is a healthy one. Besides taking in lots of vegetables, fish, soy, and rice, they are fans of seaweed. Meals like theirs means that they’re never short of nutrients.

However, Westernization has led to a less healthy diet. Japanese youngsters are now consuming refined white bread, sugar, and sweets.

2. The Japanese have healthy ways of cooking

Tonkatsu, croquettes, and tempura aside, Japanese cuisine involves lots of pan-grilling, stir-frying, broiling, and fermenting. Their meals also consist of soups and fiber from beans and rice.

3. They drink lots of tea

Your caffeine fix isn’t always unhealthy, but the Japanese have a better alternative. There’s a tea-drinking culture in Japan that’s difficult to ignore.

They drink Matcha, a powdered tea comprising young leaves. Farmers grow them specifically to increase their chlorophyll and antioxidants. With a tea-time specialty like this, who can be unhealthy?

Furthermore, Japanese food is fresh and seasonal. Japan is a small archipelago of islands with arable land, so food doesn’t have to travel far. It’s as it should be when it’s cooked and served.

Food Packers in Japan date food by the half hour instead of by the day, so there’s little chance of buying anything that gone beyond its expiration date.

The Japanese use chopsticks carefully, and eat rice from small bowls. Furthermore, they garnish food lightly and never over-fill plates.

Moreover, the Japanese walk, squat, and stand more. Being active is another reason for the long life expectancy in Japan. Commuting is an integral part of the Japanese lifestyle – every working person’s morning routine involves waiting for and standing in trains for long hours. A car, for the typical employee, is a luxury.

7. They have on-the-air exercises

The Japanese have on-air exercise routines they fondly call ‘.’ Completed en masse, they are an opportunity for them to work out and bond. These exercises have varying levels of difficulty, and everyone can participate in them.

They began when the Ministry of Communications brought radio calisthenics to the country. These exercises make everyone more athletic, alert, energetic, and flexible.

8. The Japanese have quality healthcare

The Japanese have had compulsory healthcare since the 1960s. The beauty of their healthcare system is that it only takes up 8% of their GDP, which is lower than many countries. The average Japanese person has medical check-ups at least a dozen times a year.

Besides walking almost everywhere, the Japanese spend most of their time with friends. It’s a custom in Japan to spend time out of instead of in the home. Socializing is regular for the average Japanese. Social cohesion is essential for emotional well-being and longevity.

10. The Japanese are clean

The Japanese are hyperfocused on cleanliness, which works out well for them. They practice Shintoism, a centuries-old tradition, a large part of which is purification. It’s not uncommon for a Japanese person to bathe twice a day.

Communal bathing is frequent, and there are strict guidelines for everyone to follow.

Another reason for the long life expectancy in Japan is that it has strict laws that protect the environment. The Japanese try to keep their environment as clean an accessible as possible. They also practice community cooperation, which is necessary for crowded cities.

That’s why you’ll see them decluttering and recycling constantly. This habit protects ecosystems and their well-being.

Finally, many people in Japan practice Zen Buddhism and meditation. This philosophy involves many mental wellness practices. It trains them to live in the moment.

And you can practice it anywhere- the garden, while cooking, or cycling. It reduces stress, which is a killer.

In all, the life expectancy in Japan is within our reach, but we must practice positive lifestyle habits as the Japanese do.