Prepare For Change
Home ARCONTES Cancerous Tumors or a Buildup of Toxins – If You Have Cancer... 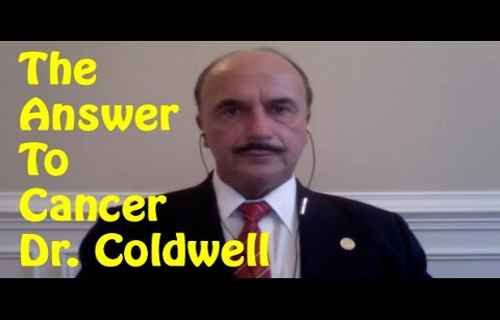 Quackery: Dr. Leonard Coldwell is said to have cured 35,000 cancer patients in Europe, without traditional medicine.

In a recent interview, Dr. Leonard Coldwell claimed that ‘all cancer’ along with ‘all other kinds of immune diseases’ are based on emotional and mental stress and can be cured in less than 12 weeks through holistic cancer remedies. In addition, Dr. Coldwell names several cancer-curing treatments that are being suppressed by the medical and pharmaceutical industry, including sodium bicarbonate, apricot kernels, rife machines,and colloidal silver.

“The medical curriculum was created by John D. Rockefeller over 100 years ago when he produced chemicals and didn’t know how to sell those chemicals. He produced sales people and called them MD’s. He produced the entire curriculum for the education of medical doctors. Rockefeller made sure that the medical doctor never learned how to cure. A medical doctor has about 1 hour of education in diet and nutritional health and no knowledge on healing. They study pathology which is the study of decay and death. They study the chemical intervention with symptoms; they don’t study healing, curing or looking for the root cause of disease. The only cause for any kind of disease is the lack of energy and that’s mainly caused by physical or emotional stress.”

Dr. Coldwell added that the medical industry owns the media and partially owns the health insurance industry, as they both work together, hand-in-hand.

In the early 1900’s, Nobel award winners Otto Warburg and Max Planck proved that cancer can only exist in an oxygen-lacking, acidic environment.

Cancer and Acidity
Typically, a normal pH value is 7 for most people. If your pH is lower than 7, it means that there are too many toxins in your body, which does not allow your body to be in an optimal alkaline state. When you are in an acidic state, your body is lacking oxygen.

Dr. Coldwell stated a case where an oncologist physician in Italy, Dr Tullio Simoncini (pictured left) has cured all types of cancer with pharmaceutical grade sodium bicarbonate (baking soda). Dr Simoncini’s is the author of “Cancer is a Fungus” and his research concluded that abnormal cells are held together by a fungus, and the fungus can’t exist in an alkaline environment. Through his sodium bicarbonate treatment, the fungi is attacked and cancer is eliminated.

Dr. Simoncini’s research concluded that the medical profession only has a 2% cancer cure rate.

Dr Coldwell believes that radiation and chemotherapy cause cancer, while surgery spreads the cancer “like an explosion through the entire body.” Dr. Coldwell added, “Cancer is your friend; cancer is there to save your life.”

“When you live in a relationship that you know is toxic and it’s killing you, you need to get out of it or it will literally kill you.”
Dr. Leonard Coldwell

The causes of cancer, according to Dr. Coldwell’s research include, living in constant worries, doubts and fears, lack of self-love, Lack of self-respect, lack of hope, lack of hope for the future and the biggest reason, making a constant compromise against yourself.

“That is why when you live in a relationship that you know is toxic and it’s killing you, you need to get out of it or it will literally kill you,” stated Dr. Coldwell. “If you go to a job that you cannot bear anymore, this job will kill you. That’s why most deadly heart attacks on Monday morning between 8 and 9 o’clock AM.” The message, according to Dr. Coldwell, is that they would rather die than going to work one more time.

Cancer Statistics
The following are some cancer statistics and trivia provided by Dr. Coldwell:

86% of all doctor visits and illness, statistically, are all based on stress or are stress related.
Stanford University study: 95% of all illness is stress related.
The medical profession is the #1 cause of death in the Western so-called civilized world.
In the last 20 years, nobody has died of cancer, they have all died from the side effects of the treatment.
Cancer is the biggest money maker in history for the pharmaceutical industry.
There are over 300 to 400 known cancer cures that have virtually no side effects and nearly a 100% cure rate.
The medical profession has a cancer cure rate of 2%. If you do nothing, you have a 27% chance of recovery.
We are all born with cancer and cancerous cells, and our immune system gets rid of it from Day 1.
The only cause for illness is lack of energy.
The main cause for lack of energy is physical and emotional stress.
Bad relationships are the main cause of cancer.
Who Should You Talk To?
In the United States, a physician can lose his or her license and/or go to jail if he or she does not doesn’t apply chemotherapy, radiation or surgery to their cancer patients. This is part of the scam that has been pulled upon us by the pharmaceutical and medical industries.

Dr. Coldwell suggested talking to a naturopathic physician before going to a medical doctor for any medical issue.

Holistic Suggestions
One of Dr. Coldwell’s suggestions was to combine 5 spoons of organic maple syrup with 1 teaspoon of sodium bicarbonate.
Another healthful recommendation by Dr. Coldwell is to add ½ teaspoon of sea salt to each gallon of water you consume, adding that the water should be in a glass container versus a plastic bottle that contains cancer causing bisphenol.

MMS
Another holistic cancer product you can research is MMS. Jim Humble, founder of the MMS treatment stated “If you take S drops of activated MMS, every hour for 8 hours for 3 days, your HIV or AIDS will be gone.” Humble added, “Everybody that had cancer, it was gone within three weeks. If you have cancer of any kind, I always give you MMS2. So you have the same protocol, but I always add MMS2 to the process.”

Cancer survival rates have been manipulated to the point where the medical industry has redefined the word “survive” to be only 5 years after the initial treatment. So hypothetically, you could “survive cancer for 5 years, and die the next month and you would be considered “cured” but dead.

Juicing and other considerations
Dr. Coldwell is a big fan of juicing and recommends an equal mixture of apple, celery and carrot juice, adding that it may initially give diarrhea. Many internet websites rank the Breville BJE510XL as the top rated juicer.

He also stated that people should research their issues as much as possible, and to study alternative options such as colloidal silver, raw food diet, apricot kernels, rife machines,and sodium bicarbonate, adding that one should try the natural remedies first.

Cleansing
One of Dr. Coldwell’s recommendations for cleansing metal from your system is a 100% natural cleanse from helpingamericanow.com, which helps eliminate the toxins from metals found in water, food, vaccines and dental work. He also emphasized the importance of a 21 day cleanse, stating “Every change in the system needs 21 days to happen and to be conditioned.”

In this writer’s opinion, one should make an educated decision by researching all options available. While I cannot make any personal recommendations, I hope this article helps in leading in your path of research. Ultimately, the decision is yours to make.

Leonard Coldwell is considered one of the leading authorities of self-help education for cancer patients and is called by many authorities a leading expert on cancer. After sixteen years as a General Practitioner in Europe, Dr. Coldwell left general practice to concentrate on his applied research in stress and stress related diseases, with particular emphasis on cancer and other “incurable” diseases.

While in Europe, Dr. Coldwell was the author of eight bestselling books, countless articles, and hundreds of self-help audio programs. He remains a syndicated columnist with more than seven million readers and continues to author one of the most successful and widely distributed self-help newsletters in Europe. Over two million people have attended his life enhancing seminars. An independent statistical institute estimated that Dr. Coldwell worked with over 35,000 patients.

He hosts the widely popular radio show The Dr. Coldwell Report. With a listener base in the tens of thousands each week, Dr. Coldwell is one of the leading voices when it comes to staying well and keeping well naturally.