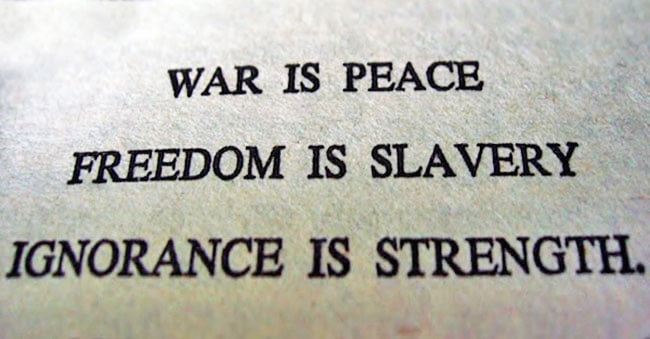 Sometimes they are five.

Sometimes they are three.

Sometimes they are all of them at once.

You must try harder.

It is not easy to become sane.”


One of the key themes from George Orwell‘s dystopic novel “1984” is that the Party can do and say whatever it wants.

And more importantly, you must believe it, with all your heart. No matter how absurd.

That’s doublethink. It is impossible for two plus two to equal three, four, and five simultaneously. But if the Party says it is so, it is so. If you can’t make yourself believe two contradictory facts simultaneously, that makes you a thought criminal – an enemy of the Party.

Thought-crime is thinking any thought that contradicts the Party.

Face-crime is when you have the wrong expression on your face.

For instance, if captured enemy soldiers are being paraded through the streets, looking sympathetic is a face-crime.

New-speak is the language of the Party… one that has painstakingly been removed of unnecessary words, or words that might contradict the Party’s ideals.

“Don’t you see that the whole aim of New-speak is to narrow the range of thought? In the end we shall make thought-crime literally impossible, because there will be no words in which to express it.”

During daily two minutes hate, citizens shout and curse whatever enemies the Party shows them.

And the face of the Party, Big Brother, is watching you. He helps you be a better citizen. This isn’t just some random literature lesson. Understanding Orwell’s 1984 will help you understand 2019 America.

For instance, one California state senator is working on her own version of New-speak.

She has banned the members of her committee from using gender pronouns, such as he, she, her, and him. Instead they must use “they and them” to respect non-binary gender choices.

Last month a high school student famously committed a face-crime when he stood, apparently smirking, while a Native American activist beat a drum in his face.

The 16-year-old was then subjected to “two minutes hate” by the entire nation. The Party labeled him an enemy, and Twitter obliged.

Of course when I reference ‘the Party’, I don’t mean to imply that all these Orwellian developments are coming from a single political party.

They’ve ALL done their parts to advance Orwellian dystopia and make it a reality.

It’s like double-think… you have to simultaneously pay and not pay out dividends.

Same goes for cops will pull you over for speeding, but also for “suspicious” textbook perfect driving.

The #MeToo movement made it a thought-crime to not immediately believe the accuser and condemn the accused, no evidence required.

When Matt Damon pointed out that we should not conflate a pat on the butt with rape, he was met with “two minutes hate” for expressing the wrong opinion.

“multicultural” is New-speak for “no whites allowed”…

And when a controversy over offensive Halloween costumes erupted at Yale a few years ago, it was a student free speech group which suppressed any debate on the topic.

It’s amazing how they want you to celebrate diversity… as long as its not intellectual diversity.

“1984” was supposed to be a warning. Instead, it has become an instruction manual…