Prepare For Change
Home ARCONTES For Targeted Individuals: What Innocent Citizens Can Do To Protect Themselves From... 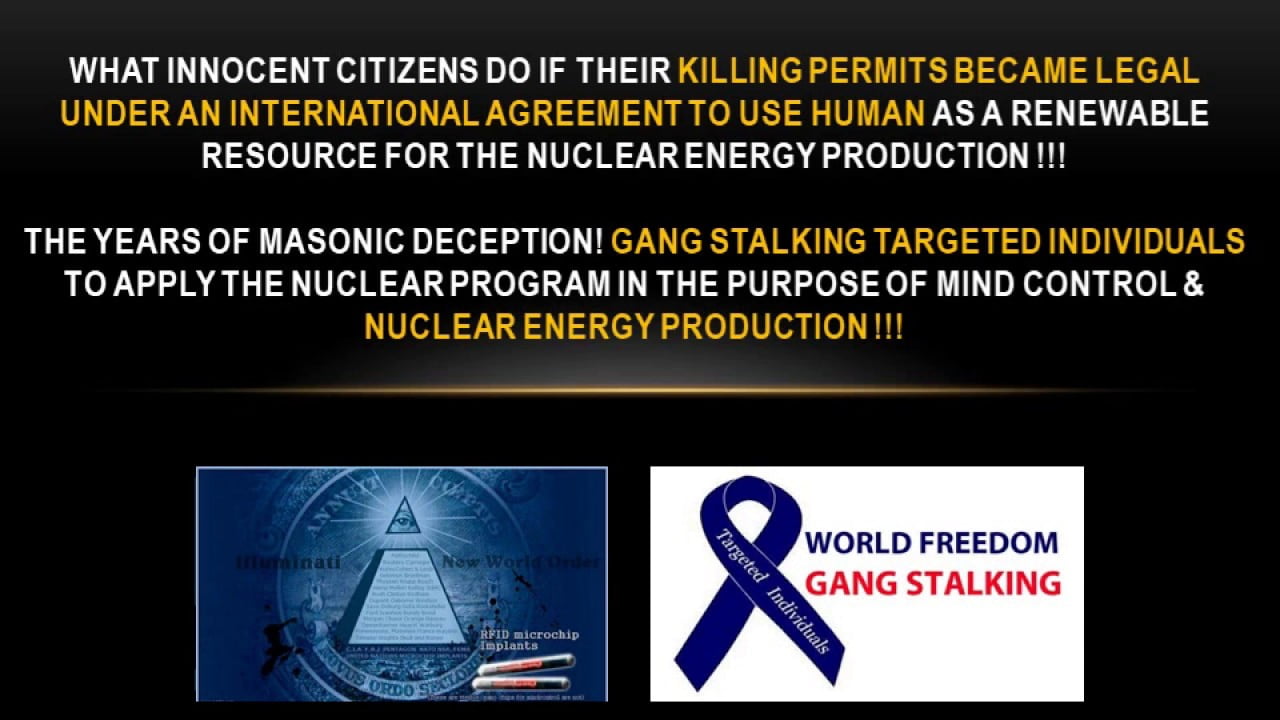 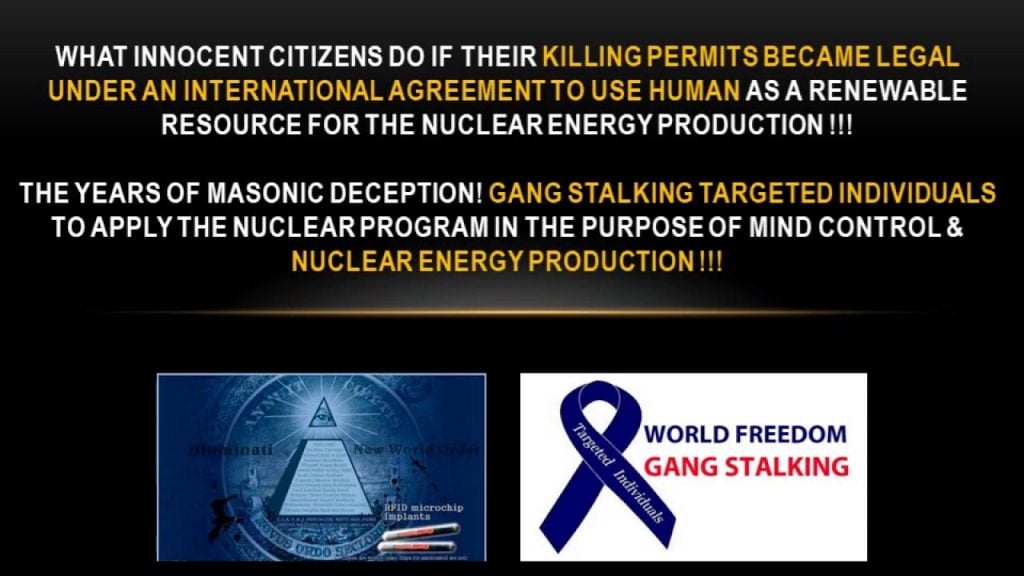 What innocent citizens can do if their killing permits became legal under an international agreement to use human as a renewable resource for the production of the Nuclear Energy!!!
​

The Years of Masonic Deception! Gang Stalking Targeted Individuals to apply the Nuclear Program in the purpose of Mind Control & Nuclear Energy Production!​

Save your life and others through raising  awareness of the Nuclear Program that targeted individuals in the purpose of nuclear energy, artificial rain & Diamonds production, which led to the increase of chronic diseases and suicides around the world due to the radiation pollution & imbalance of the electromagnetic system and DNA of the human bodies, however this human rights violations have been covered by media and returned to Witchcraft, video games like blue whale, depression, mental illness or chronic diseases, while they are the victims of the Nuclear Program which managed by Mason,  Nuclear Establishments and Telecommunication Companies.​
​

What is the Nuclear Program?

1. Air Condition Magnetic Field spread the smart dust and Radioactive contamination such as uranium, radon and polonium for the purpose of human body infection and enrichment process
2. Radio Frequency Signals, Electrical Conduction & Modulated Sound Signal that created by the Internet, Mobile, Computer & TV
3. Smart dust  and Radioactive contamination such as uranium, radon and polonium can be also spread through water tap and food
4.The drugs that use electronic microchips for example the capsule that are implanted under the skin to prevent pregnancy or to store patient medical information , or to perform Virtual Surgery
5. Addiction to social media especially Facebook and video games & TV to force people to use the Internet & TV as long as possible and during this period they are mining the human electronic energy, which covers 10% of the electricity consumption in the world, also use the nuclear energy in changing the natural phenomena of artificial rain & storms that used to convert methane gas to carbon gas then to graphite and then to DIAMOND.
6. Psychotronics Microchips for artificial telepathy, brain manipulation, Remote Neural Monitoring and DNA reprogramming since the DNA is responsible for building the human body and data storage and communications.
7. Smart Dust : Is a system for many MEMS systems such as sensors, robots or other devices that can detect, for example, light, temperature, vibration, magnetism, or chemicals, they are usually run on a computer network wireless and are distributed to certain areas for performing tasks, usually sensed by determining radio frequencies and its size is measured by nanometer.
8. Chemical and physical parameters of water that implanted in toilets in the purpose of the radioactive waste measurement
9. UFO – Unidentified Flying Objects

All governments around the world have been deceived by the fact that the main objectives of the program are to obtain free and renewable sources of energy, artificial rain & diamonds as well as the possibility of controlling the minds and guidance of their peoples, and they have been deceived by that they are the only one who controlling the nuclear program of their peoples by their National Security Agency NSA, but in fact that all NSA satellites infiltrated by the Mason and they have the upper hand in the management of these satellites to serve the Masonic entity and plans to colonize the world through the increase of unemployment, crime, atheism, homosexuality, the desire of peoples to take revenge of governments, ignite strife and then unify the world under the rule of the Mason and control all the world’s wealth and population.​
The Damage and Symptoms of Nuclear Program Targeted Individuals – The First Phase:
​​

The Damage and Symptoms of Nuclear Program Targeted Individuals – The Second Phase:

The Most Effective Tactics That Healing & Free Victims from the Nuclear Program Targeted Individuals:
Please Share to Bring Awareness to Public & Limit the Destruction of The billions of Victims Live around the World, And to Stop Using Humans for the Nuclear Energy Production.
​​
For more information and resources, please visit the following websites:
​
https://martinacable99.wordpress.com/2012/11/04/targeted-individuals-psychotronics-anonymous/
https://prepareforchange.net/2017/10/29/nanochips-and-smart-dust-the-dangerous-new-face-of-the-human-microchipping-agenda/
http://www.targeted-individuals.co.uk/ ​​
http://www.thetruthdenied.com/news/2014/11/11/how-to-remove-an-rfid-implant/comment-page-1/
​
http://www.icaact.org/contact-icaact.html#.WVZdoYTyupo
​​
https://www.zersetzung.org/mind-control/mc-research-docs/199-government-technology-to-read-your-thoughts-and-implant-new-ones
​
http://www.disclosureproject.org/access/es-understanding-ufo-sec.htm
https://www.who.int/ar/news-room/fact-sheets/detail/ionizing-radiation- health-effects-and-protective-measures 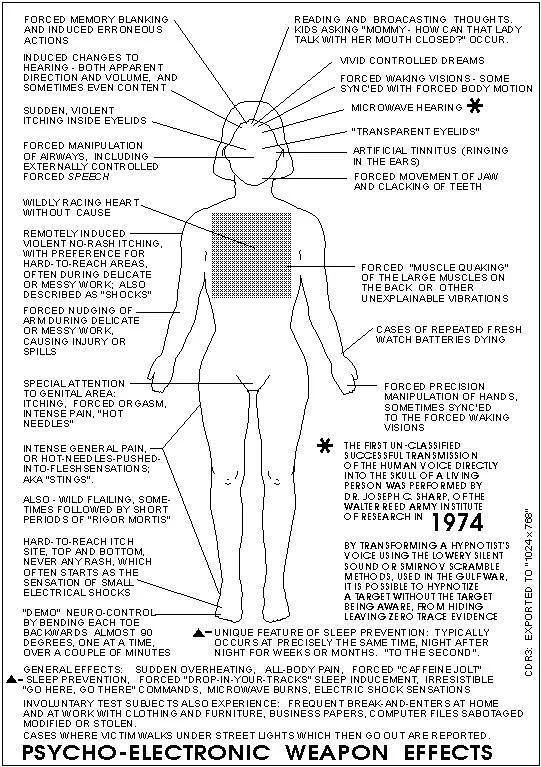