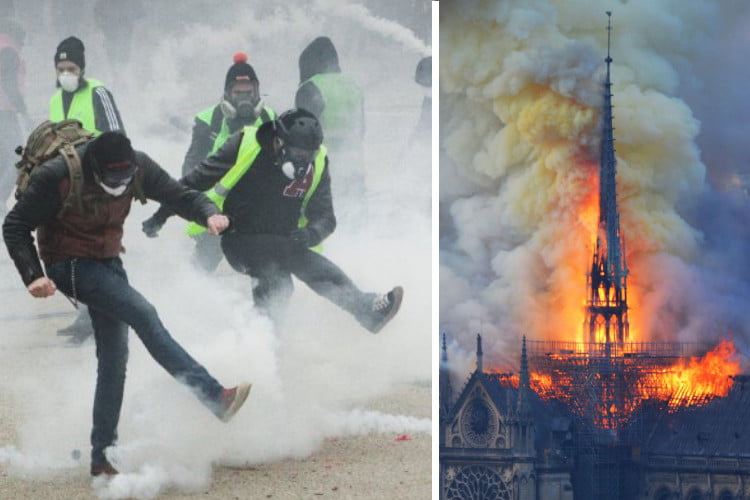 The contrast between the French government’s and upper class’s response to Monday’s fire at Notre Dame and ongoing inaction to combat income inequality, was a primary driver of mass protests in Paris on Saturday.

The Gilets Jaunes, or Yellow Vests, staged their first major protest since large portions of the historic cathedral burned, apparently due to an electrical short-circuit, to call attention to the €1 billion ($1.1 billion) that the country’s richest families have donated to help rebuild the church, months after the yellow vest movement began demonstrating against income inequality.

“You’re there, looking at all these millions accumulating, after spending five months in the streets fighting social and fiscal injustice. It’s breaking my heart,” Ingrid Levavasseur, a founder of the movement, told the Associated Press.

Yellow vest protesters move out from Bercy in Paris on one of 2 authorised marches. Police very much in evidence on what authorities fear could degenerate badly over the day. #f24 #GiletsJaunes pic.twitter.com/mmbrkxNrLu

France 24 noted that many members of the Yellow Vest movement—which began in rural areas last fall when many struggling French people demonstrated against high fuel costs and President Emanuel Macron’s generous tax cuts for the rich, and has since gathered support from a number of ideological groups—mourned earlier this week along with the rest of the country as news of the heavily damaged 674-year-old church spread.

“Some of the activists said they cried in front of their TV sets as they watched the Gothic architectural masterpiece being consumed by flames Monday night and some even made small donations for the restoration of the iconic building, despite their struggles to make ends meet,” reported the outlet.

But grief turned to anger for many, Levavasseur said, as the Yellow Vests watched donations pour in and Macron call for the church to be repaired within five years, exacerbating the perception of many that he is a “president for the rich.”

“What happened at Notre-Dame is obviously a deplorable tragedy. But nobody died,” Levavasseur told France 24. “I’ve heard someone speaking of national mourning. Are they out of their minds?”

One sign at Saturday’s demonstration read, “Victor Hugo thanks all the generous donors ready to save Notre Dame and proposes that they do the same thing with Les Miserables,” referring to Hugo’s classic novels about the cathedral and the struggles of impoverished people in France.

By Saturday afternoon, at least 126 demonstrators had been arrested and the protests had turned violent in some areas, with some protesters setting small fires in streets and police deploying tear gas. Overall, the AP reported, the demonstrations were peaceful.

The demonstrators’ concerns about prioritizing Notre Dame’s reconstruction over the needs of low-income French households have been echoed in the U.S., where many criticized the Trump administration for offering aid to France to help rebuild the damaged church.

Trump and Pence have money in the budget to pitch in for Notre Dame, but not for Puerto Rico or Flint. And they have thoughts and prayers for the people of France, but not for Black communities in the country they are meant to represent. This is a disgrace https://t.co/DNiB4CluGh

After some called attention in the days after the Notre Dame fire to a number of historically black churches that have been burned recently in the American South—some allegedly in attacks by white nationalists—$1.9 million in donations poured in to help those churches.