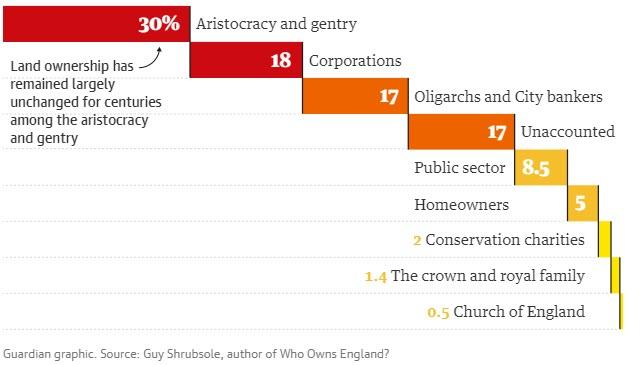 Research by author reveals corporations and aristocrats are the biggest landowners 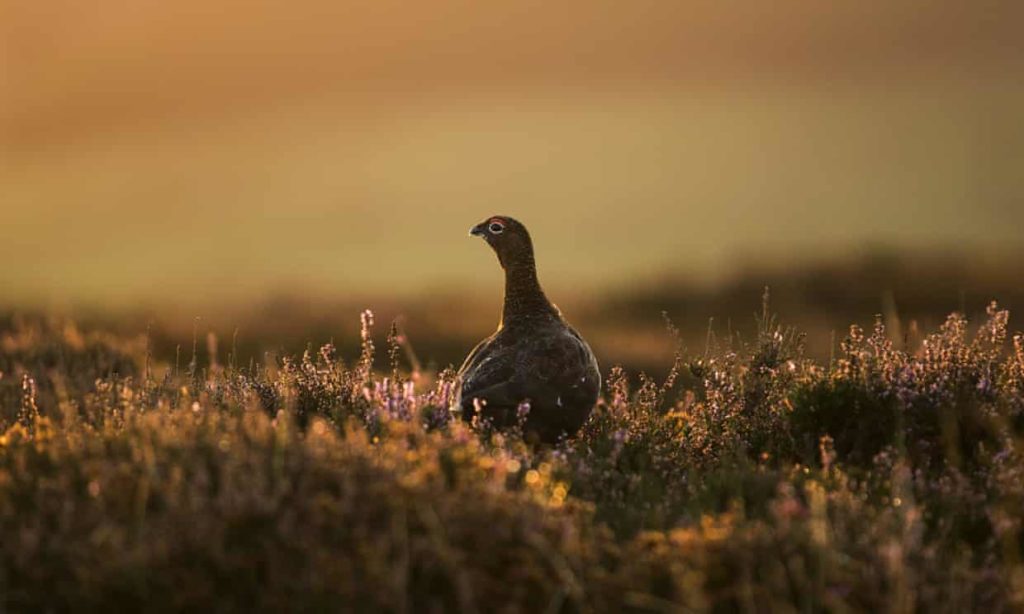 Half of England is owned by less than 1% of its population, according to new data shared with the Guardian that seeks to penetrate the secrecy that has traditionally surrounded land ownership.

The findings, described as “astonishingly unequal”, suggest that about 25,000 landowners – typically members of the aristocracy and corporations – have control of half of the country.

So 1% of the people own half of England. Inheritance tax reform could fix that

The figures show that if the land were distributed evenly across England’s population, each person would have just over half an acre – an area roughly half the size of Parliament Square in central London.

Major owners include the Duke of Buccleuch, the Queen, several large grouse moor estates, and the entrepreneur James Dyson.

While land has long been concentrated in the hands of a small number of owners, precise information about property ownership has been notoriously hard to access. But a combination of the development of digital maps and data as well as pressure from campaigners has made it possible to assemble the shocking statistics.

Jon Trickett, Labour MP and shadow minister for the Cabinet Office, hailed the significance of the findings and called for a full debate on the issue, adding: “The dramatic concentration of land ownership is an inescapable reminder that ours is a country for the few and not the many.

“It’s simply not right that aristocrats, whose families have owned the same areas of land for centuries, and large corporations exercise more influence over local neighbourhoods – in both urban and rural areas – than the people who live there.

Guy Shrubsole, author of the book in which the figures are revealed, Who Owns England?, argues that the findings show a picture that has not changed for centuries. “Most people remain unaware of quite how much land is owned by so few,” he writes, adding: “A few thousand dukes, baronets and country squires own far more land than all of middle England put together.”

“Land ownership in England is astonishingly unequal, heavily concentrated in the hands of a tiny elite.”

The book’s findings are drawn from a combination of public maps, data released through the Freedom of Information Act and other sources.

Guardian Today: the headlines, the analysis, the debate – sent direct to you

Shrubsole estimates that “the aristocracy and gentry still own around 30% of England”. This may even be an underestimate, as the owners of 17% of England and Wales remain undeclared at the Land Registry. The most likely owners of this undeclared land are aristocrats, as many of their estates have remained in their families for centuries.

As these estates have not been sold on the open market, their ownership does not need to be recorded at the Land Registry, the public body responsible for keeping a database of land and property in England and Wales.

Shrubsole estimates that 18% of England is owned by corporations, some of them based overseas or in offshore jurisdictions. He has based this calculation on a spreadsheet of land owned by all UK-registered companies that has been released by the Land Registry. From this spreadsheet, he has listed the top 100 landowning companies.

The list is headed by a large water company, United Utilities, which said that much of its land consisted of areas immediately surrounding its reservoirs.

Shrubsole, who works as a campaigner for the environmental charity Friends of the Earth, estimates that “a handful of newly moneyed industrialists, oligarchs and City bankers” own around 17% of England.

The public sector – central and local government, and universities – appears to be the most open about its landholdings, according to Shrubsole, partly in order to advertise land it has wanted to sell off in recent years. He concludes that the public sector owns 8% of England.

Shrubsole writes that the bulk of the population owns very little land or none at all. Those who own homes in England, in total, own only 5% of the country.

He calculates that the land under the ownership of the royal family amounts to 1.4% of England. This includes the Crown Estate, the Queen’s personal estate at Sandringham, Norfolk, and the Duchies of Cornwall and Lancaster, which provide income to members of the family.

Conservation charities, such as the National Trust and the Woodland Trust, collectively own 2% of England, while the church accounts for 0.5%. 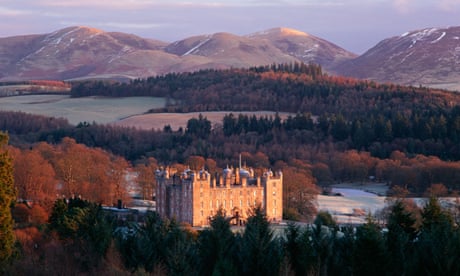 Report calls for reform of ‘unhealthy’ land ownership in Scotland

A small number of ultra-wealthy individuals have traditionally owned vast swaths of land in Scotland. Last month, a major review conducted by the Scottish Land Commission, a government quango, found that big landowners behaved like monopolies across large areas of rural Scotland and had too much power over land use, economic investment and local communities. The quango recommended radical reform of ownership rules.

Carys Roberts, chief economist of the left-of-centre thinktank the Institute for Public Policy Research, said she was “shocked but not surprised” by Shrubsole’s findings on the concentration of land ownership. She said that the concentration of land in a few hands was a big reason why wealth as a whole was so unequal in the country, as those without land were prevented from generating more income.

She added: “We have this idea that the class structures have changed so that the aristocracy is not as important as it used to be. What this demonstrates is the continuing importance of the aristocracy in terms of wealth and power in our society.”

She said one effect of the sale of public land was that the public lost democratic control of that land and it could not then be used, for example, for housing or environmental improvements. “You can’t make the best social use of it,” she added.

• This article was amended on 18 April 2019. In calculating how much land there would be for each person in England if it were divided equally, an earlier version incorrectly used the population of the UK instead of England.