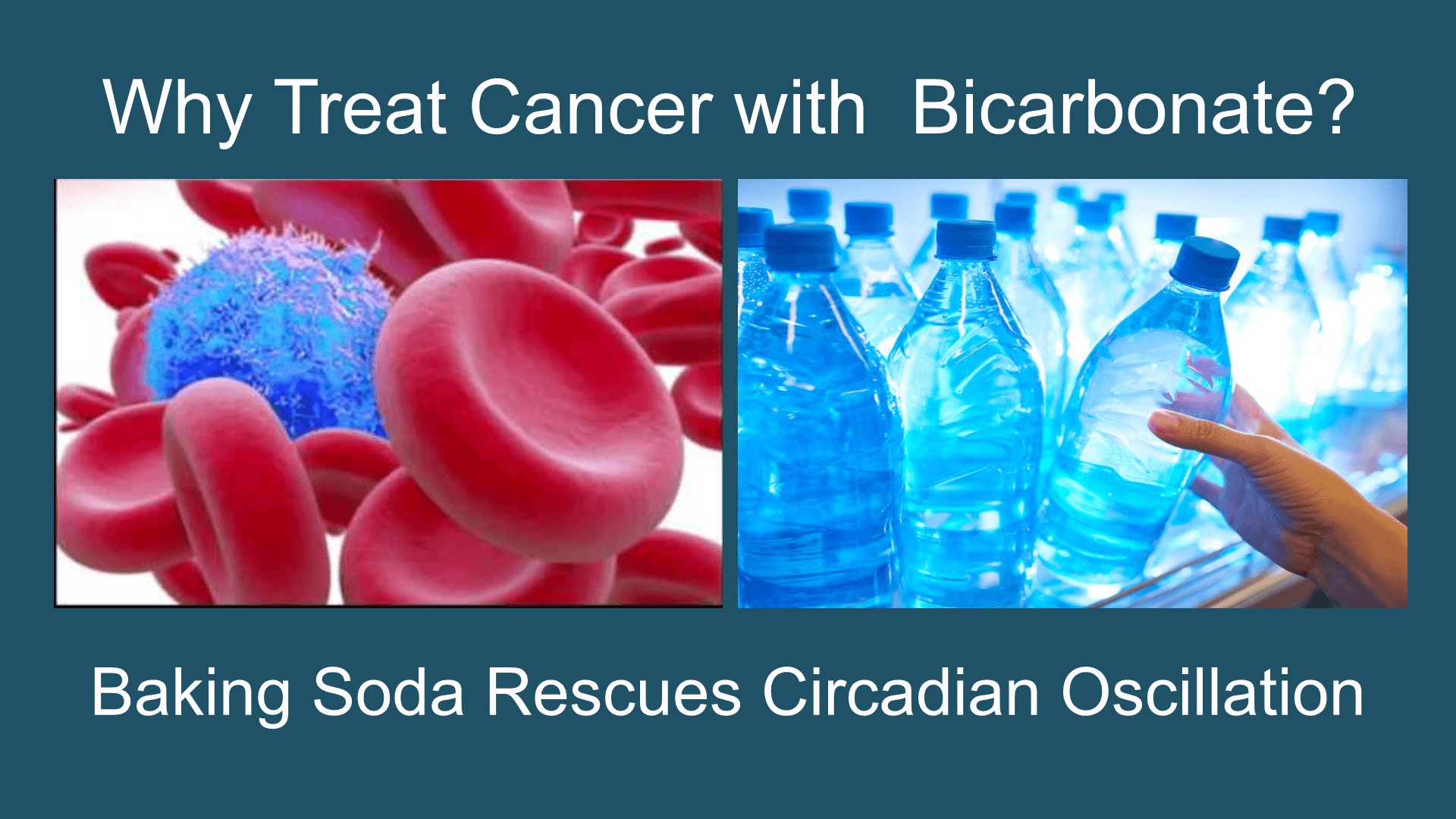 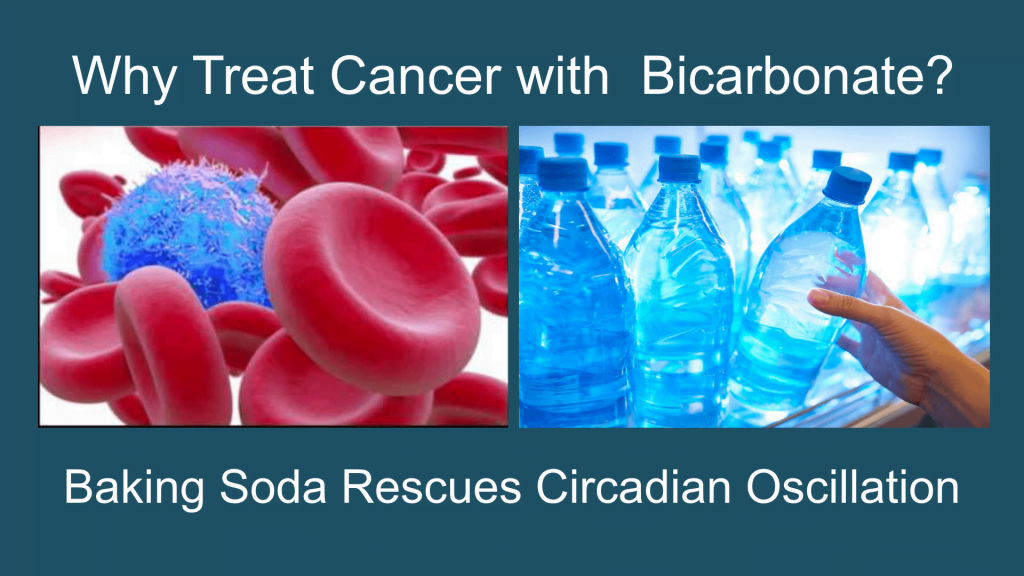 In terms of importance, appropriate bicarbonate levels are just as crucial as hydration, proper breathing (getting enough oxygen) staying warm, maintaining healthy pH (high oxygen status) and optimal nutrition. What we learn here changes the face of modern oncology because it is now clear, after the most recent research presented below, that bicarbonates should be included in all cancer patients protocols.

Ten years ago I wrote Sodium Bicarbonate – Rich Man’s Poor Man’s Treatment For Cancer. Since then, many researchers have sustained the assertion that it would be deplorable to leave this most basic substance out of anyone’s cancer treatment, even if one is using toxic chemotherapy and radiation.

I am not suggesting that anyone should follow Dr. Tullio Simoncini’s bicarbonate treatments administered intravenously. There is little flexibility in the blood for pH changes. Simoncini got into serious trouble for over alkalizing the blood of a patient, a condition that easily ends in death. Using oral and transdermal administration is preferable not only because of safety issues but also because one can get bicarbonate to all the cells in the body, which is impossible if one adds bicarbonate directly into the blood.

Simple baking soda is the ideal medicine for mitigating radiation exposure. It helps clear the kidneys of uranium toxicity. It certainly has been used when chemotherapy is administered and during cardiac arrest. It is also the treatment of choice for fungus infections.It addresses CO2 deficiencies. It helps in efforts to detoxify the body of the thousands of chemicals infecting us. It is an excellent antiviral pulling the rug out from under the little critters that are sensitive to pH changes. Most viruses are pH sensitive.

Now we have more reason than ever to focus on bicarbonate therapy for cancer. A new Ludwig Cancer Research study said, “If you want to clean cancer’s clock—that is, defeat it decisively—you may want to really clean it—that is, restore it to proper working order. Only cancer cells that remain active, in sympathy with the tick-tock of their internal circadian mechanisms, remain susceptible to cancer therapies. So, how might these circadian mechanisms be kept in motion? Sodium bicarbonate now promises to awaken cancer cells that have gone to sleep deep inside tumors, where oxygen deprivation and acidic conditions go hand in hand. By buffering against acidification, sodium bicarbonate rescues circadian oscillation.”

Healing with Hydrogen! You are just about to discover how brilliant, safe and effective modern medicine can be.GET STARTED

You can think of the circadian cycle as a sort of internal clock of your body that regulates many different mechanisms. The cycle starts over about every 24 hours (hence the term “circadian”, coming from Latin circa “about” and dies “day”), and among its many functions, it tells cells when they’re supposed to produce and consume nutrients. Healthy cells are normally allowed to do so for about 12 hours a day, in order to prevent them from being overwhelmed by a flood of excessive nutrients.”

Acidification, the Ludwig researchers report, essentially disengages some of the elements that keep the cell’s circadian clock ticking. This acid-mediated effect, the researchers assert, can be reversed by sodium bicarbonate. When they gave tumor-xenografted mice water that had been supplemented with sodium bicarbonate, the acidity of hypoxic patches in the tumors was neutralized.

The study, presented May 31 2018, in the journal Cell, in an article entitled ‘Acid Suspends the Circadian Clock in Hypoxia through Inhibition of mTOR’. “Unexpectedly, we uncover a profound disruption of the circadian clock and diurnal transcriptome when hypoxic cells are permitted to acidify to recapitulate the tumor micro-environment,” the article states. “Buffering against acidification or inhibiting lactic acid production fully rescues circadian oscillation.”

The study’s authors, led by Chi Van Dang, M.D., Ph.D., scientific director of the Ludwig Institute for Cancer Research, conclude that acid produced during the cellular metabolic response to hypoxia suppresses the circadian clock through diminished translation of clock constituents. Dr. Dang, who is also a professor in the Molecular and Cellular Oncogenesis Program at The Wistar Institute said, “But if you add baking soda to the drinking water given to those mice, the entire tumor lights up with mTOR activity. The prediction would be that by reawakening these cells, you could make the tumor far more sensitive to therapy.”

“We started out with a question about oxygen starvation and the circadian clock, and we ended up discovering a new mechanism by which acidic conditions in tissues shut off a lot of things—including the cell’s molecular clock,” muses Dang.

The finding that something as simple as baking soda could reverse this effect and render quiescent cancer cells susceptible to cancer therapies excites Dang. “The concept is so easy,” he says. “It’s not some $100,000 per year drug. It’s literally just baking soda.” Using MRI, medical scientists have seen how much of tagged bicarbonate is converted into carbon dioxide within tumors. In more acidic tumors, more bicarbonate is converted into carbon dioxide.

“Studies conducted at the University of Bari in Italy clearly demonstrated that a hallmark of all tumors, regardless of their origin or background, is their acidic environment. In fact, tumor progression increased with an acidic pH and hypoxia, or a low oxygen level,” writes Dr. Veronique Desaulniers. The perturbation in pH dynamics rises very early in carcinogenesis and is one of the most common patho-physiological hallmarks of tumors.”

“The results of a study suggest that tumor cells do, indeed, perform niche engineering by creating an acidic environment that is non-toxic to the malignant cells but, through its negative effects on normal cells and tissue, promotes local invasion.”

Tumor invasion did not occur into regions with normal or near-normal pH. Immuno-histochemical analyses revealed that cells in the invasive edges expressed the glucose transporter GLUT-1 and the sodium-hydrogen exchanger NHE-1, both of which were associated with peritumoral acidosis. In support of the functional importance of our findings, oral administration of sodium bicarbonate was sufficient to increase peritumoral pH and inhibit tumor growth and local invasion in a preclinical model, supporting the acid-mediated invasion hypothesis.

Increased systemic concentrations of pH buffers leads to reduced intratumoral and peritumoral acidosis. Oral NaHCO3 selectively increased the pH of tumors and reduced the formation of spontaneous metastases in mouse models of metastatic breast cancer. NaHCO3 therapy also reduced the rate of lymph node involvement and significantly reduced the formation of hepatic metastases. Acid pH was shown to increase the release of active cathepsin B, an important matrix remodeling protease.

Oncologist Dr. Tullio Simoncini was persecuted for his use of sodium bicarbonate for cancer patients because he laid attention to the relationship between cancer and fungus. It needs to be remembered when connecting cancer with fungus that Cancer—always believed to be caused by genetic cell mutations—can in reality be caused by infections from viruses, bacteria, and fungi.

“I believe that, conservatively, 15 to 20% of all cancer is caused by infections; however, the number could be larger—maybe double,” said Dr. Andrew Dannenberg, director of the Cancer Center at New York-Presbyterian Hospital/Weill Cornell Medical Center. Dr. Dannenberg made the remarks in a speech in December 2007 at the annual international conference of the American Association for Cancer Research so it is another reason to treat cancer with a bicarbonate, which has strong anti-infection effects.

Greater knowledge of the mechanisms that contribute to the survival of tumor cells is key to vanquishing them. Shutting down the circadian oscillation is one principle strategy that cancer cells employ to thrive and sodium bicarbonate fully rescues circadian oscillation. Thus it is time for mainstream oncologists to wake up to what medical science has to say about bicarbonates. There is just too much benefit and practically zero downside to bicarbonates. Bicarbonate has long been used in ICU, emergency departments and in ambulances. There is no reason it should not be employed for all cancer patients.