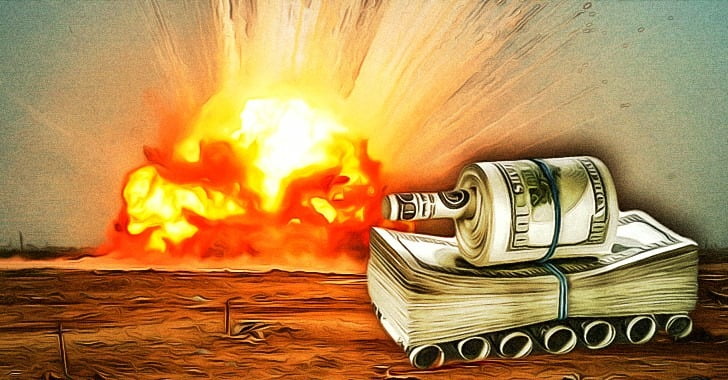 Global military spending reached its highest level since the records began two decades ago, according to a new analysis released Monday—an increase led by the United States and China.

The Stockholm International Peace Research Institute (SIPRI) revealed in its latest annual report that countries around the world collectively poured $1.82 trillion into their militaries in 2018, a 2.6 percent rise from the previous year. Together, the top two spenders, the United States and China, accounted for about half of all spending.

“The increase in U.S. spending was driven by the implementation from 2017 of new arms procurement program under the Trump administration,” Aude Fleurant, director of SIPRI’s Arms and Military Expenditure (AMEX) program, said in a statement.

At $649 billion, US🇺🇸 military spending increased for the first time in 7 years by 4.6% in 2018. The US🇺🇸 remained the largest spender in the world, accounting for 36% of global military spending.

Last year, the U.S. military expenditure—which represents more than a third of global spending—increased for the first time in seven years. It rose by 4.6 percent, hitting $649 billion.SIPRI researcher Nan Tian told German broadcaster Deutsche Welle that trend is expected to continue.“They have started to implement a new modernization program of the military that will start in 2019 or 2020,” Tian explained. “This is in the region of $1.8 trillion over the next 20 years. It is a massive amount of money being spent by the U.S.—and it ranges from conventional weapons to nuclear capabilities.”

Progressives continue to criticize President Donald Trump for his focus on military spending—particularly in contrast with his lack of investment elsewhere, from education and housing to clean air and water.

“For too long, we have had budgets that provide security for a wealthy and powerful few rather than the poor and disenfranchised many,” they added, acknowledging previous presidents’ contributions to military expansion. “Real security means establishing peace, justice, and promoting the material wellbeing and liberty of all, including future generations.”

The US🇺🇸 spent $649 billion on the military in 2018, a total which is almost greater than the next top 8 countries combined.

China, which secured the second spot for SIPRI’s analysis, spent $250 billion on its military in 2018.

“Growth in Chinese military spending tracks the country’s overall economic growth,” Tian said in a statement. “China has allocated 1.9 percent of its GDP to the military every year since 2013.”

Although Saudi Arabia decreased its military spending from the previous year, the kingdom—which, along with the United Arab Emirates, is leading a U.S. and U.K.-backed war on Yemen—still led the world as the biggest spender per capita. The United States ranked second.

As a fact sheet (pdf) explains, SIPRI calculates a country’s total military expenditure by considering what is spent on armed forces, defense ministries and related government agencies, para-military forces, and military space activities. That includes salaries and pensions for all relevant personnel “as well as expenditure related to operations and maintenance, procurement, military research and development, and military aid.”

Nearly half of the 15 biggest spenders—Canada, France, Germany, Italy, Turkey, the United Kingdom, and the United States—are members of NATO, an international military alliance of 29 North American and European countries. NATO nations put a total of $963 billion toward their militaries in 2018—over half of global spending.

7 of the 15 highest military spenders are members of #NATO:

Comparison in the graphic below and in SIPRI’s latest report ➡️https://t.co/vkhLyUZ155#MILEX #GDAMS pic.twitter.com/gxAZ2Mi10B