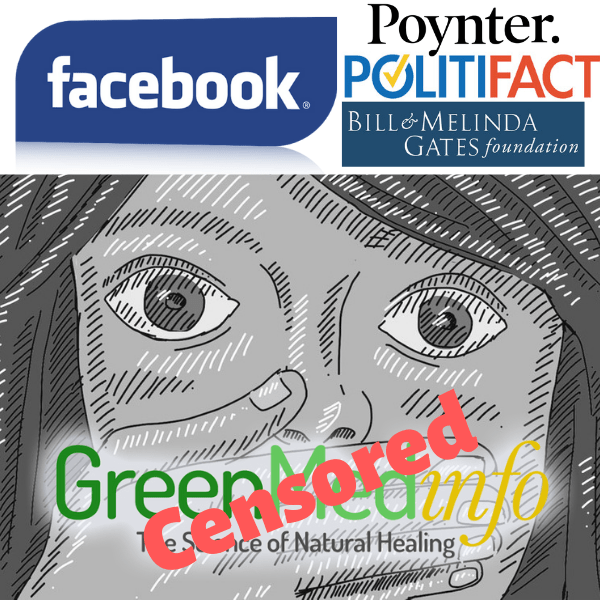 Recently, Politifact.com, a website run by the Poynter Institute and funded by the Bill & Melinda Gates Foundation, ran an article titled, “No, anti-vaccination meme is way off on vaccine testing,” claiming that the meme below which we posted to our facebook page on April 15th was false. 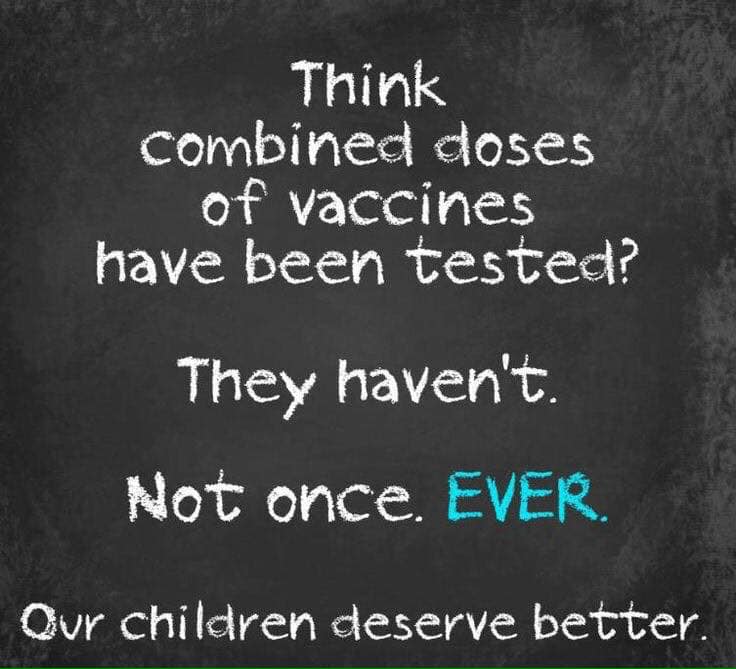 Because Politifact is in partnership with Facebook as a so-called “non-partisan,” 3rd party, fact-checker, they flagged our page as promoting “false news” and informed us, on April 22nd, that “Your Page has reduced distribution and other restrictions because of repeated sharing of false news.” Since then, our page no longer comes up when you search for pages with the keyword “GreenMedInfo,” and we have noticed a steep decline in our reach which on an average week would exceed 1 million.

Due to our long held commitment to publishing truthful, evidence-based information on the underreported, unintended adverse effects of conventional medical interventions like vaccination, we have been subject to a wide range of attempts to discredit, defame, and censor us, over the years. For instance, all the way back in 2013, UNICEF published a report titled “Tracking anti-vaccination sentiment in Eastern European social media networks,” where GreenMedInfo.com, along with other prominent natural health websites, was cited as spreading vaccine “misinformation,” despite the fact that we simply aggregate, disseminate and provide open access to peer-reviewed research on vaccine adverse effects and safety concerns extracted directly from the US National Library of Medicine.

Lately, the censorship has been scaling up to disturbing levels. In December of last year, Pinterest deleted our account for posting information questioning vaccine safety and promoting research on evidence-based natural medicine. Ironically, they claimed we were endangering the health of their users by posting alternative information, even though Pinterest regularly allows minors to access pornographic and violent content, both of which have well-established significant deleterious psycho-emotional and physical effects in adults, much less children.

So, how does Facebook determine who is of suitable integrity and impartiality to become a 3rd party fact-checker? 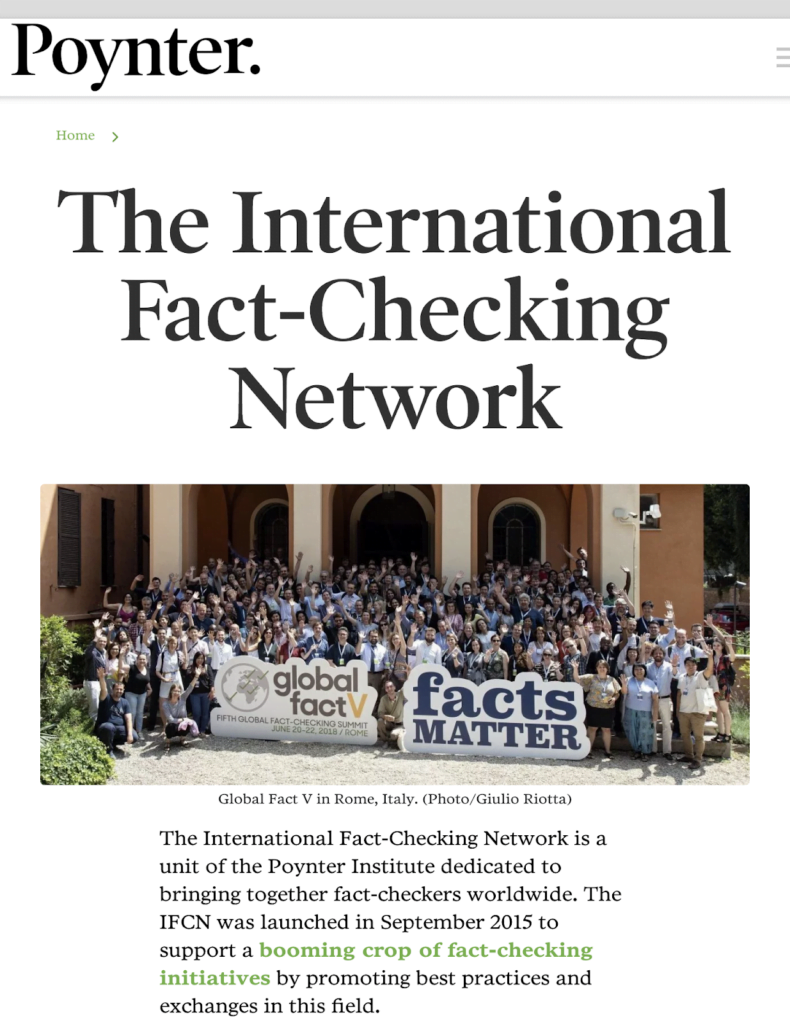 Yes, you read that correctly. Poynter, the owner of Politifact — the presumably impartial brand and judge of what is “false” or “true” news — certified itself as trustworthy and impartial.

It does not reflect well on Facebook that it allowed Poynter to certify itself as worthy to police the world’s news feeds in order to mete out algorithmic punishment to those whose views it does not agree with. Thanks to a Veritas exposé, we know how Facebook’s censorship strategy of”boiling works behind the scenes:

How this machiavellian scheme has gone virtually unnoticed until now is hard to understand. But we hope that our example will help others understand the shadowy agendas at play between Poynter, Politifact, Facebook, and which are hidden in broad daylight for everyone to see.

But the red flags, and organizations involved, don’t stop there. Poytner’s fact-checking operation was funded by a $380,000 grant from the Bill & Melinda Gates Foundation — an organization notoriously dismissive of the downside of mass vaccination programs, which includes injuries and deaths the government has paid over $4 billion dollars in compensation towards through the National Vaccine Injury Compensation Fund inaugurated by an act of Congress in 1986. 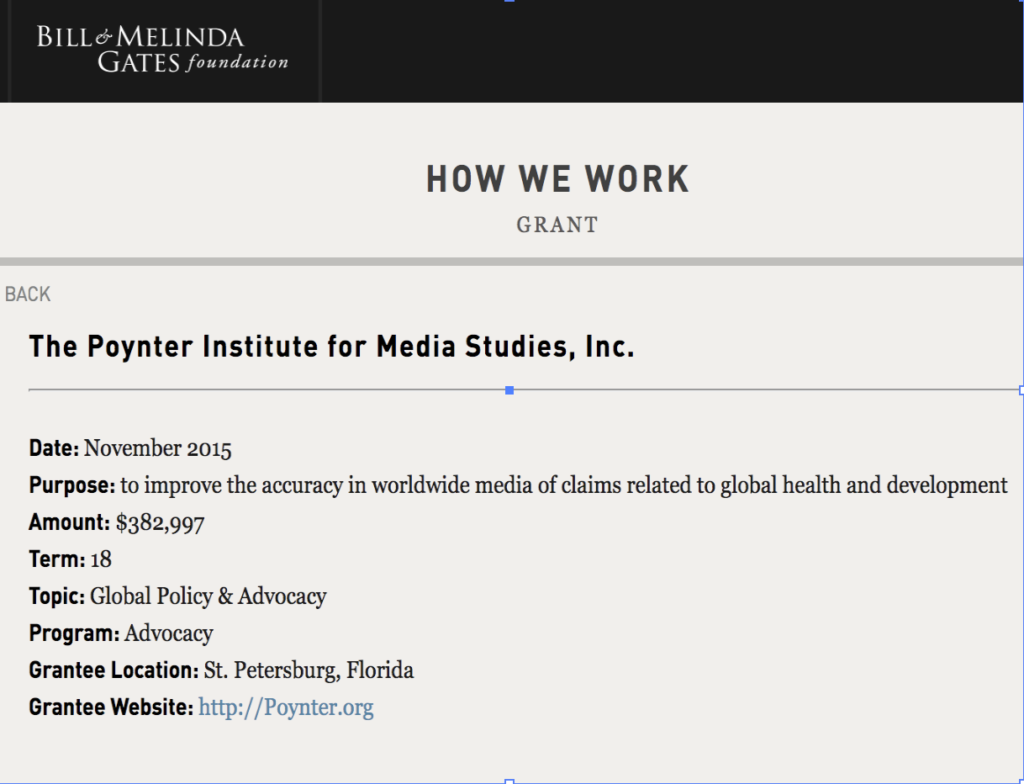 But are they correct about the meme we posted? Is it really “fake news”?

And does a mere posting of a meme, whose authorship is unknown but certainly was not produced by GreenMedInfo or its contributors, justify reducing the reach of our entire page, which over 525,000 people around the world have voluntarily and organically opted into receiving information from over the past decade?

Embarrassing as it is for the Politifact editorial team, whose entire premise is that they can be trusted to be fact-based, they didn’t report on our name correctly, calling us Greeninfo.com:

“Now, another anti-vaccine claim has surfaced on Facebook on a page called Greeninfo.com, which describes itself as an “alternative and holistic health service.”

The post reads: “Think combined doses of vaccines have been tested? They haven’t. Not once. EVER. Our children deserve better.”

The post, which provides no details or evidence, has been shared over 600 times since April 15 and was flagged as part of Facebook’s efforts to combat false news and misinformation on its News Feed. (Read more about our partnership with Facebook.)

Let’s cut to the chase: The claim is false – all vaccines are tested for years before and after being made available to the public, including “combined doses.”

How did they prove this statement?

They reached out to a single individual, Daniel Salmon, who is the director of the Institute for Vaccine Safety at Johns Hopkins Bloomberg School of Public Health, who presumably can verify by his word alone the veracity of the claim. He simply countered in email: “This is not a true statement,” and pointed to a December 2008 document from the U.S. Department of Health and Human Services (HHS). The document nowhere references the existence of a true placebo-controlled vaccine safety study, where saline instead of another adjuvanted vaccine was used; nor does the document discuss the fact that the present-day vaccination schedule involves giving 72 vaccines to children by age 6, where none of the vaccines have been studied together for safety; much less in juxtaposition to a control group who received a true placebo (saline).

This glaring problem is discussed among mainstream medical sites and authorities as well. For instance, MEDPAGE TODAY’s KevinMD.com has an article written by Chad Hayes, MD, titled “The vaccine study you’ll never see,” wherein he admits:

“No, we don’t have a double-blinded, randomized controlled trial comparing our vaccine schedule to placebo.”

Wouldn’t MEDPAGE and KevinMD also be labeled as false news according to the standard applied to our page, for again, simply reposting a meme?

When it comes to the CDC, presumably a trustworthy source because it is believed to be “evidence-based,” their page on Vaccine Safety Concerns for Multiple Vaccines provides little assurance because their statements have no scientific citations. This is a classical example of the CDC’s cult of authority, where they use “science by proclamation” or “eminence-based medicine” to promote their agenda, instead of referencing actual research like we do at GreenMedInfo.com:

“Getting multiple vaccines at the same time has been shown to be safe.

Scientific data show that getting several vaccines at the same time does not cause any chronic health problems. A number of studies have been done to look at the effects of giving various combinations of vaccines, and when every new vaccine is licensed, it has been tested along with the vaccines already recommended for a particular aged child. The recommended vaccines have been shown to be as effective in combination as they are individually.  Sometimes, certain combinations of vaccines given together can cause fever, and occasionally febrile seizures; these are temporary and do not cause any lasting damage. Based on this information, both the Advisory Committee on Immunization Practices and the American Academy of Pediatrics recommend getting all routine childhood vaccines on time.”

Disturbingly, the CDC acknowledges on the same page as the excerpt above:

“A child who receives all the recommended vaccines in the 2018 childhood immunization schedule may be exposed to up to 320 antigens through vaccination by the age of 2.”

This reminds us of the absurdly irresponsible statement of Dr. Paul Offit, who while admitting that vaccination is a violent act, considers it safe for an infant to receive 10,000 vaccines at once (revised from a previous statement where he said an infant could receive 100,000 vaccines at one time). Offit’s faith in the safety of vaccines represents a deep conflict of interest, considering he is the patent holder for a highly profitable rotavirus vaccine which has profound safety issues, in that it has potentially infected millions of children with serreptitious, disease-producing retroviruses.

The reality is that no study has ever been performed on the interaction and potential synergistic toxicity of the admnistration of 320 antigens through vaccination by the age of 2. This was conclusively affirmed by a presentation given by Del Bigtree, where at minute 58:40 he references a 2013 Institute of Medicine (IOM) report on the safety of the entire immunization schedule, citing the following passage:

“No studies have compared the differences in health outcomes … between entirely unimmunized populations of children and fully immunized children … [Furthermore,] studies designed to examine the long-term effects of the cumulative number of vaccines or other aspects of the immunization schedule have not been conducted.”

Many other key safety concerns with vaccines emerged from that report, with a series of them summarized by NVIC here: 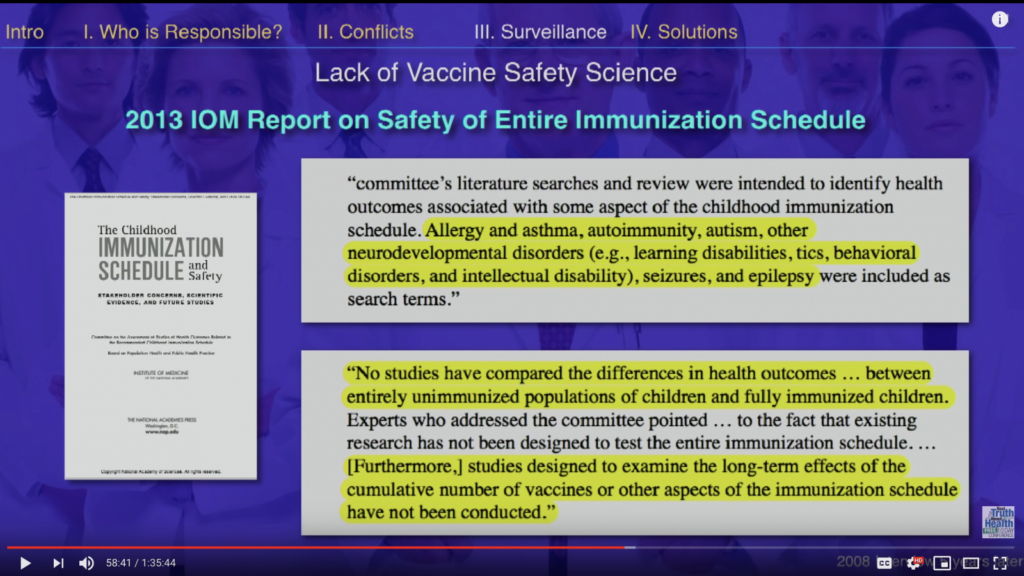 Given the IOM report’s findings that there has not been a single study conducted to prove the safety of the entire schedule, the meme we posted stands as factually true, and those who have used it as a justification for censorsing and defaming us are clearly acting from political motivations reflective of the interests of their primary funders, such as the Gates Foundation.

You can see it all here: gates-foundation-funded-fact-checker-politifact-censors-greenmedinfo-facebook-rep