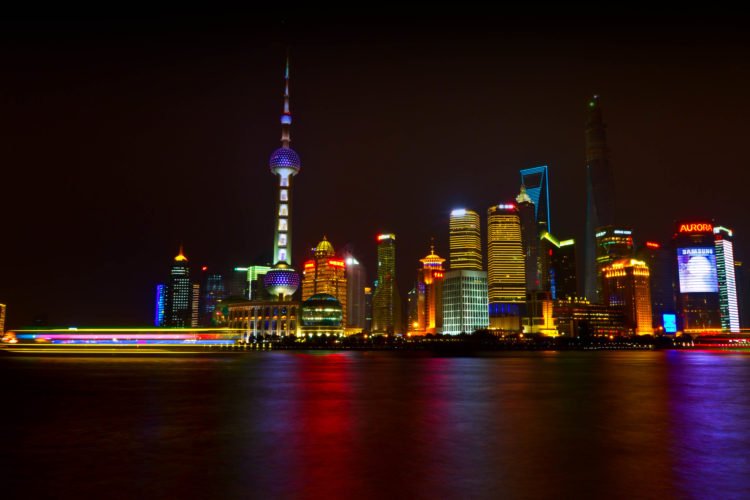 Home ownership has been called “the quintessential American dream.” Yet today less than 65% of American homes are owner occupied, and more than 50% of the equity in those homes is owned by the banks. Compare China, where, despite facing one of the most expensive real estate markets in the world, a whopping 90% of families can afford to own their homes.

Over the last decade, American wages have stagnated and U.S. productivity has consistently been outpaced by China’s. The U.S. government has responded by engaging in a trade war and imposing stiff tariffs in order to penalize China for what the White House deems unfair trade practices. China’s industries are said to be propped up by the state and to have significantly lower labor costs, allowing them to dump cheap products on the U.S. market, causing prices to fall and forcing U.S. companies out of business. The message to middle America is that Chinese labor costs are low because their workers are being exploited in slave-like conditions at poverty-level wages.

But if that’s true, how is it that the great majority of Chinese families own homes? According to a March 2016 article in Forbes:

… 90% of families in the country own their home, giving China one of the highest home ownership rates in the world. What’s more is that 80% of these homes are owned outright, without mortgages or any other liens. On top of this, north of 20% of urban households own more than one home.

Due to their communist legacy, what they get for their money is not actually ownership in perpetuity but a long-term leasehold, and the quality of the construction may be poor. But the question posed here is, how can Chinese families afford the price tag for these homes, in a country where the average income is only one-seventh that in the United States?

The Misleading Disparity Between U.S. and Chinese Incomes

Some commentators explain the phenomenon by pointing to cultural differences. The Chinese are inveterate savers, with household savings rates that are more than double those in the U.S.; and they devote as much as 74%of their money to housing. Under China’s earlier one-child policy, many families had only one heir, who tended to be male; and home ownership was a requirement to score a wife. Families would therefore pool their resources to make sure their sole heir was equipped for the competition. Homes would be purchased either with large down payments or without financing at all. Financing through banks at compound interest rates doubles the cost of a typical mortgage, so sidestepping the banks cuts the cost of housing in half.

Those factors alone, however, cannot explain the difference in home ownership rates between the two countries. The average middle-class U.S. family could not afford to buy a home outright for their oldest heir even if they did pool their money. Americans would be savers if they could, but they have other bills to pay. And therein lies a major difference between Chinese and American family wealth: In China, the cost of living is significantly lower. The Chinese government subsidizes not only its industries but its families—with educational, medical and transportation subsidies.

According to a 2017 HSBC fact sheet, 70% of Chinese millennials (ages 19 to 36) already own their own homes. American young people cannot afford to buy homes because they are saddled with student debt, a millstone that now averages $37,000 per student and will be carried an average of 20 years before it is paid off. A recent survey found that 80% of American workers are living paycheck to paycheck. Another found that 60% of U.S. millennials could not come up with $500 to cover their tax bills.

In China, by contrast, student debt is virtually nonexistent. Heavy government subsidies have made higher education cheap enough that students can work their way through college with a part-time job. Health care is also subsidized by the government, with a state-run health insurance program similar to Canada’s. The program doesn’t cover everything, but medical costs are still substantially lower than in the U.S. Public transportation, too, is quite affordable in China, and it is fast, efficient and ubiquitous.

The disparity in incomes between American and Chinese workers is misleading for other reasons. The “average” income includes the very rich along with the poor; in the U.S., the gap between those two classes is greater than in China. The oversize incomes at the top pull the average up.

Even worse, however, is the disparity in debt levels, which pulls disposable income down. A survey after the 2008-09 credit crisis found that household debt in the U.S. was 136% of household income, compared with only 17% for the Chinese.

Another notable difference is that 70% of Chinese family wealth comes not from salaries but from home ownership itself. Under communism, all real property was owned by the state. When Deng Xiaoping opened the market to private ownership, families had an opportunity to get a home on reasonable terms; and as new homes were built they traded up, building the family asset base.

All this was done with the help of China’s federal government, which in recent decades has pumped massive amounts of economic stimulus into the economy. Unlike the U.S. Federal Reserve’s quantitative easing, which went straight into big bank reserve accounts, the Chinese stimulus has generated new money for productive purposes, including local business development and infrastructure. Sometimes called “qualitative easing,” this “quantitative easing with Chinese characteristics” has meant more jobs, more GDP and more money available to spend, which in turn improves quality of life.

The Chinese government has done this without amassing a crippling federal debt or triggering runaway inflation. In the last 20 years, its M2 money supply has grown from just over 10 trillion yuan to 80 trillion yuan ($11.6T), a nearly 800% increase. Yet the inflation rate of its Consumer Price Index (CPI) has remained low. In February of this year, it was just 1.5%. In May it rose to 2.7% due to an outbreak of swine fever, which drove pork prices up; but this was a response to shortages, not to an increase in the money supply. Radically increasing the money supply has not driven consumer prices up because GDP has increased at an even faster rate. Supply and demand have risen together, keeping consumer prices low.

Real estate prices, on the other hand, have skyrocketed 325% in the last two decades, fueled by a Chinese shadow banking system that is largely beyond regulatory control. Pundits warn that China’s housing is in an unsustainable bubble that will pop, but the Chinese housing market is still more stable than the U.S. subprime market before 2008, with its “no-doc no-down” loans. Chinese buyers typically put 40 to 50% down on their homes, and the demand for houses remains high. The central bank is also taking steps to cool the market, by targeting credit so that it is steered away from real estate and other existing assets and toward newly-produced goods and services.

That central bank intervention illustrates another difference between Chinese-style qualitative easing and Western-style QE. The People’s Bank of China is not trying to improve banking sector liquidity so that banks can make more loans. Chinese economists say they don’t need that form of QE. China’s banks are already lending, and the central bank has plenty of room to manipulate interest rates and control the money supply. China’s central bank is directing credit into the local economy because it doesn’t trust the private financial market to allocate credit where local markets need it. True to its name, the People’s Bank of China seems actually to be a people’s bank, geared to serving the economy and the public rather than just the banks themselves.

In early April, President Trump said in one of his many criticisms of the U.S.  central bank that he thought the Fed should be doing more quantitative easing (expanding the money supply) rather than quantitative tightening (shrinking the money supply). Commentators were left scratching their heads, because the official U.S. unemployment rate is considered to be low. But more QE could be a good idea if it were done as Chinese-style qualitative easing. A form of monetary expansion that would allow Congress to relieve medical and educational costs, grant cheap credit to states to upgrade their roads and mass transit, and support local businesses could go a long way toward making American workers competitive with Chinese workers.

Unlike the U.S. government, the Chinese government supports its workers and its industries. Rather than penalizing China for that “unfair” trade practice, perhaps the U.S. government should try doing the same. China’s legacy is socialist, and after opening to international trade it has continued to serve the collective good, particularly of its workers. Meanwhile, the U.S. model has been regressing into feudalism, with workers driven into slave-like conditions through debt. In the 21st century, it is time to upgrade our economic model from one of feudal exploitation to a cooperative democracy that recognizes the needs, contributions and inalienable rights of all participants.