Prepare For Change
Home Awakening The US Gave Slavers Their Land Back. What About Black Folks’ Reparations? 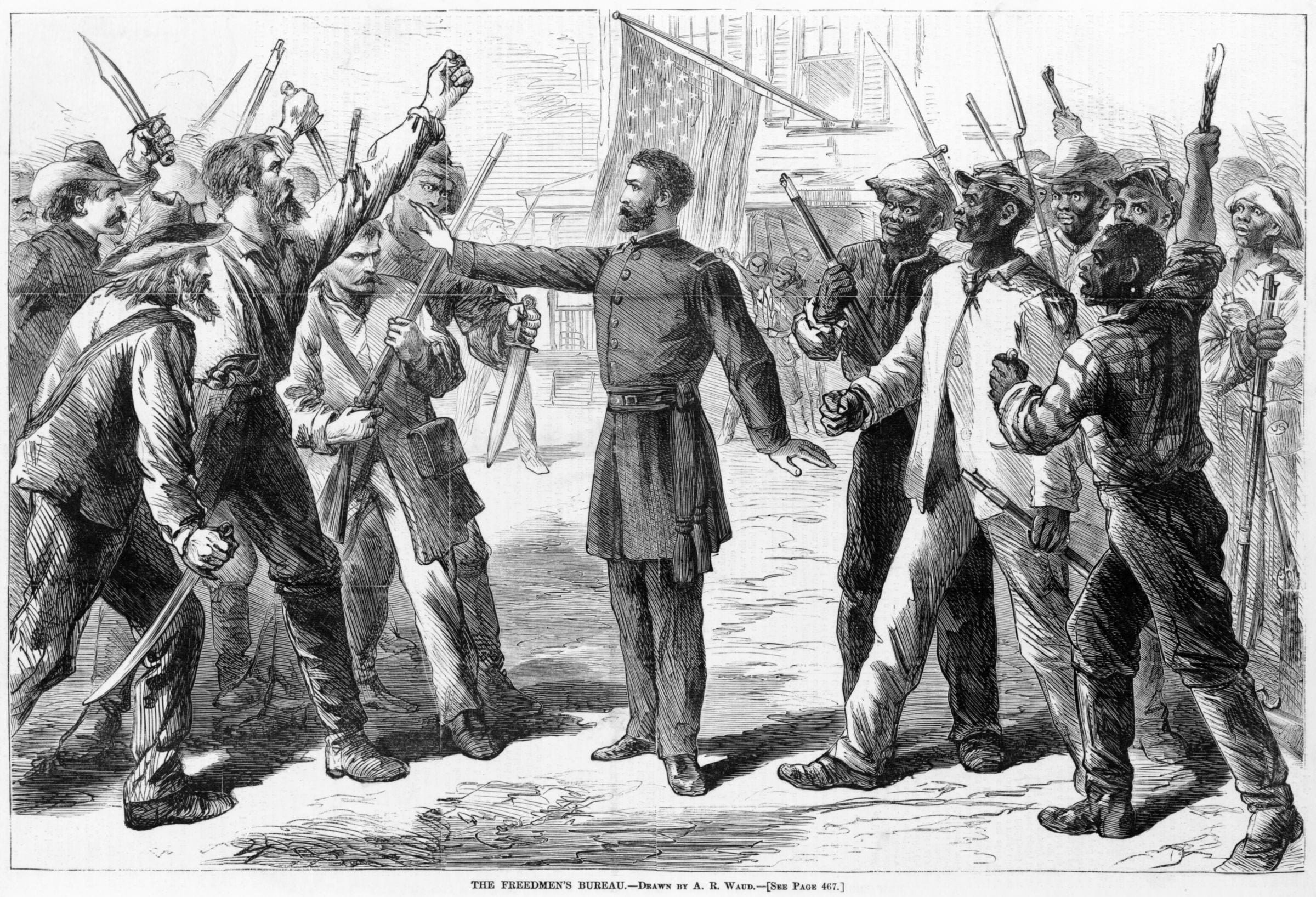 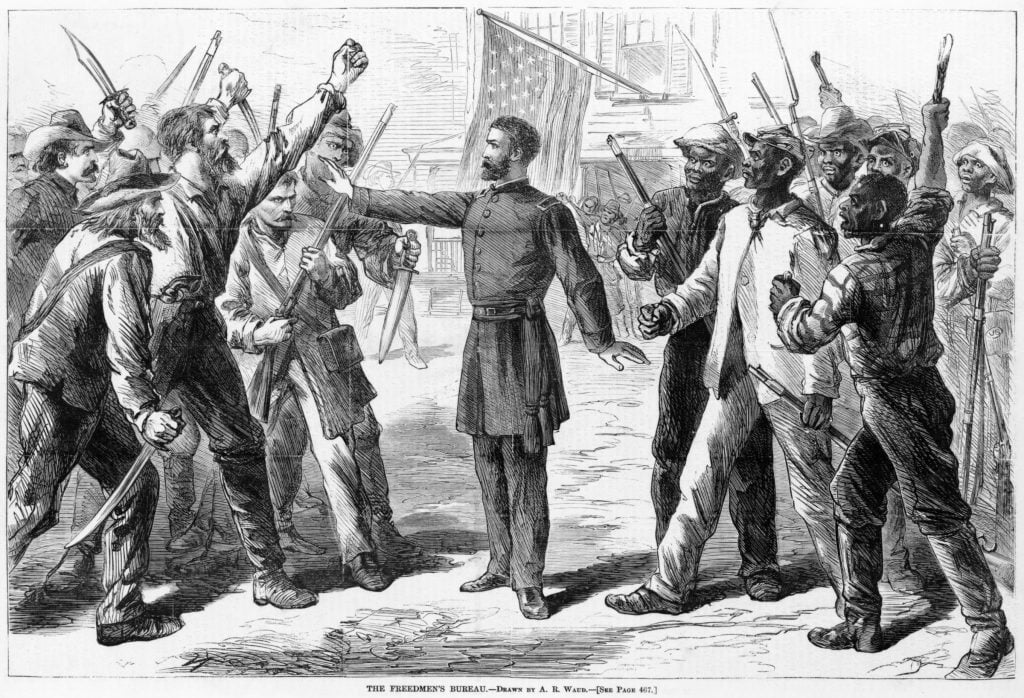 A man representing the Freedman’s Bureau stands between armed groups of Euro-Americans and Afro-Americans in this illustration from 1868.ALFRED R. WAUD, HARPER’S WEEKLY

The U.S. government was on the wrong side of history when it reneged its promise of “40 acres and a mule” to formerly enslaved Black Americans in 1865. Exactly 154 years later, let’s pass H.R. 40, the bill for a commission to study reparations, and get it right this time.

On January 16, 1865, Union Army Gen. William Sherman issued Special Field Order No. 15, which ordered the redistribution of roughly 400,000 acres of land along the coastline of South Carolina, Florida and Georgia to Black families in 40-acre plots. He later authorized the Army to loan mules to them, too. General Sherman’s order provided for the settlement of roughly 40,000 Black people.

President Abraham Lincoln pushed for the creation of the Bureau of Refugees, Freedmen, and Abandoned Lands, which was established on March 3, 1865. This “Freedmen’s Bureau” was authorized to give legal title for 40-acre plots of land to Black people and to pro-Union white refugees. But after John Wilkes Booth assassinated Lincoln, President Andrew Johnson overturned Sherman’s order. President Johnson later returned the land that the Union Army had confiscated from slavers back to those same former slavers.

Get reliable, independent news and commentary delivered to your inbox every day.

The U.S. government restored slavers their land, but what about Black folks’ freedom dues?

The promise of Black restitution remains unfulfilled. Trillions of dollars and millions of acres in reparations are in order. The Crown of England and the sovereign people of the United States, its white majority, owe a legal duty of restitution to descendants of slaves due to slavery, neo-slavery (in the form of convict leasing and peonage, whereby Black people were imprisoned for bogus crimes such as vagrancy or joblessness and then forced to labor in chain gangs and on prison farms) and segregation.

Chinese philosopher Confucius said that just governance is based on “rectification of names.” He meant that the first thing that people must know are true terms and precise definitions, which they must use as tokens for organizing society. If the people fail to come to terms, equivocation and confusion result; society devolves into an ivory Tower of Babel. Confucius was saying, in so many words, that euphemized politics are as ruinous to civilization as debased coin.

The framers of the Constitution organized the U.S. along the lines of a written document to guide governance. Therefore, Americans must rectify that document’s terms to achieve democracy. Let’s start with “justice.” Among the many reasons that the sovereign people did “ordain and establish” the Constitution, perhaps the most important one was “to establish Justice.” But what is justice?

According to Black’s Law Dictionary (revised fourth edition), it means “the constant and perpetual disposition to render every man his due.” The dictionary further distinguishes commutative justice and distributive justice. Commutative justice governs contracts. “It consists in rendering to every man the exact measure of his dues, without regard to his personal worth or merits, i.e., placing all men on an equality.”

Distributive justice governs the distribution of rewards and punishments. It discriminates between the more deserving and the more blameworthy: “It assigns to each the rewards which his personal merit or services deserve, or the proper punishment for his crimes.” Commutative justice treats everyone according to the same standard, whereas distributive justice treats people by different standards according to their perceived merits.

In 1788, when the sovereign people ratified the Constitution, they did so by the logic later expressed in Dred Scott v. Sandford: “The negro has no rights which white men are bound to respect.” Dred Scott held that a Black person, whether slave or freedman, could never be the equal of a free man. The white population in the U.S. effectively adopted the same caste system that the lighter-skinned Aryans had forced upon the darker-skinned Dravidians of ancient India. Their written instrument, the Constitution, legalized slavery in defiance of English common law.

The Rights of Englishmen, Vested in Black People

The common law never recognized slavery as legal. Black people were subjects of the Crown of England up until the American Revolution. The rights of Englishmen, going back to 1215 Magna Carta, were vested in Black people upon their arrival in Virginia in 1619, although they had arrived in the U.S. as early as 1526. For example, Anthony Johnson, whose documented presence in Virginia dates from 1621, eventually got his freedom dues. He started as an indentured servant. By the 1650s, he owned a 250-acre estate.

Johnson’s career thus epitomizes the social contract that Black people made with the Crown by way of the Crown’s agents: the Virginia Company, the Massachusetts Bay Company, and the other corporations that were chartered by the Crown and that later became the United States.

For the first 40-odd years, many Black people, perhaps most, were indentured servants, not slaves. They got their freedom dues just like their white counterparts did. Which means that the original social contract between Black subjects and the Crown was about commutative justice — indentures and freedom dues.

The turning point was 1662, when the Virginia Assembly stated that all children “borne in this country shal be held bond or free only according to the condition of the mother.” The Assembly defied common law precedent of children inheriting the name and status of the father. The Black womb thus became the matrix of slavery and of Dred Scottdistributive justice.

The American Revolution consolidated the triumph of Dred Scottdistributive justice over social-contract commutative justice. Henceforth, the tyranny of the white majority dictated the national agenda. Two events in particular catalyzed the counter-revolution: first, the Somersetcase of 1772, in which Lord Mansfield held that slavery was unsupported by common law; and second, Lord Dunmore’s Proclamation of 1775, whereby the governor of Virginia declared that every Negro would be free who joined the British Army in their fight against American rebellion.

As to framing it as a counter-revolution, consider the Declaration of Independence’s penultimate complaint, that King George III “has excited domestic Insurrections amongst us.” The phrase euphemizes white paranoia of slave rebellion as aggravated by Somerset and the Dunmore Proclamation. Also consider its final complaint about George III having “endeavoured to bring on the inhabitants of our frontiers, the merciless Indian Savages whose known rule of warfare, is an undistinguished destruction of all ages, sexes and conditions.”

The Declaration of Independence states that republican governance is based on the consent of the governed. But Black people assented under duress of slavery from around 1662 until 1865. They assented under duress of neo-slavery from around 1865 until 1941. That was when Circular No. 3591, a directive from the attorney general, announced a policy focused on eradicating neo-slavery.

They continue to assent under duress of presumptive guilt, which violates their Ninth Amendment right to the presumption of innocence. The Black presumptive criminal, as stereotyped by white paranoia, induced the antebellum slave codes, and later, the Black Codes of neo-slavery and of mass incarceration.

Furthermore, Black folks have assented under duress of unjust enrichment, whereby first the English Crown, then the U.S. government, allowed whites (slavers in particular) to enrich themselves at Black peoples’ expense. King Charles II himself chartered the Royal African Company in 1660 to monopolize the transatlantic slave trade. Already noted were the 40-acre estates due to Black people thanks to Special Field Order No. 15 that went instead to their former slavers.

Here’s Black’s Law Dictionary on unjust enrichment: “Under this doctrine a defendant has something of value at the plaintiff’s expense under circumstances which impose a legal duty of restitution.” Here’s the definition: “‘Unjust enrichment’ of a person occurs when he has and retains money or benefits which in justice and equity belong to another.”

The English Crown and the sovereign (white) people of the United States engorged several generations of wealth at Black folks’ expense: They enslaved them for two centuries, then re-enslaved them for another three generations. Government programs such as the 1862 Homestead Act, which rendered millions of acres to white families, and New Deal programs that made the white middle class into “the affluent society,” neglected the Black caste whom were segregated to the shack and to the ghetto.

White Americans continue to segregate Black Americans, to criminalize them and to deny them equal educational opportunity. American history, from 1662 until now, chronicles how white property rights have denied Black human rights. Not human rights as in the rights championed by Thomas Paine and the French Revolution. Rather, the rights of Englishmen that were vested in Black people during the early 17th century. 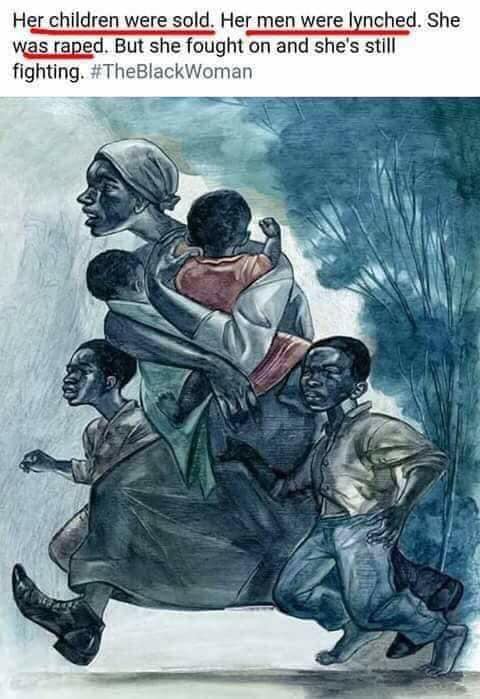 The English Crown and the white people of the U.S., especially inheritors of slaver wealth, have a legal duty of restitution to descendants of slaves, for they have denied several generations their inheritance.

Their zero-sum society based on caste persists. Hence the racial wealth gap — the average white family has 20 times the wealth of the average Black family — some 350 years in the making. Restitution would bridge this unjust enrichment gap. Black’s Law Dictionary defines restitution thus: “The act of restoring; restoration; restoration of anything to its rightful owner; the act of making good or giving equivalent for any loss, damage or injury; and indemnification.”

Restitution would mean many trillions of dollars and millions of acres in reparations to account for the losses, damages and injuries suffered by Black people these last three-and-a-half centuries. It would also mean a paradigm shift from Aryan distributive justice as expressed by Dred Scott, to the commutative justice of Lincoln’s “Gettysburg Address,” which dedicated the nation to the proposition that all men and women are created equal.

The point of H.R. 40 is for its mandated commission to fill in the details as to how much is owed to Black people and to work out the problem of how “to establish Justice” in terms of commutative justice. A “rectification of names” is in order.

To that end, H.R. 40’s operative word is restitution — to validate the Constitution for descendants of slaves. Thus restored, they could truly consent to the social contract of “We the People.”