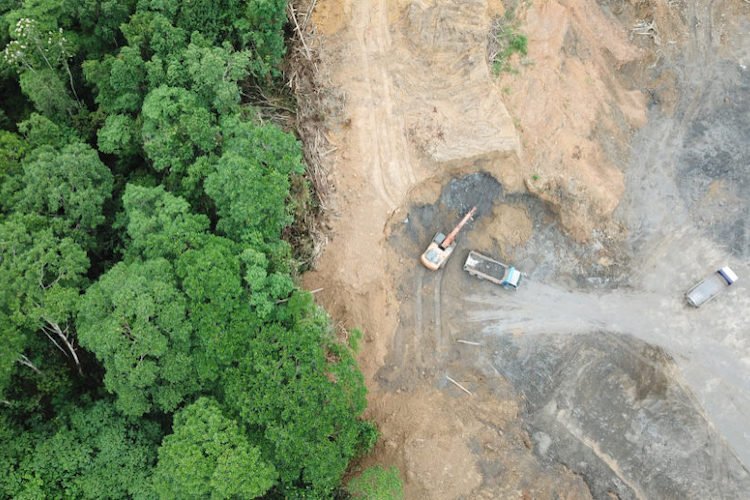 Major corporations involved with commodities like beef, palm oil, and soya pledged in 2010 to end deforestation over the next decade—but instead of fulfilling that promise, a new Greenpeace International analysis found the companies are set to destroy at least 50 million hectares of forest worldwide by 2020.

“Our message to companies is simple: evolve your business to prevent climate and ecological breakdown.”
—Anna Jones, Greenpeace U.K.That estimate—the environmental advocacy group noted in a statementannouncing its Countdown to Extinction report (pdf) Tuesday—is comparable to the size of Spain.

It is also “a conservative estimate,” the group said, based on a combination of data on deforestation, tree cover loss, and forecasting through 2019. Given recent increases in tree loss cover, “the actual figure could be much higher.”

Companies producing and using palm oil, soya, meat and dairy are destroying the forests for profit.

If we want to win the fight against climate chaos, companies must change their ways. Join the movement >>> https://t.co/E27V8RPUQo#ForestsAreLife pic.twitter.com/Q7QaQ1HBHv

Greenpeace released its new report as over a thousand corporate executives were in Vancouver for the global summit of the Consumer Goods Forum (CGF), a organization led by various CEOs that brings together retailers and manufacturers.

The Greenpeace report, released just months away from the CGF’s deadline, details how consumer goods companies have failed to meet the deforestation goal, and the consequences of it. As Greenpeace U.K.’s Anna Jones put it, “these companies are destroying our children’s future by driving us towards climate and ecological collapse.”

“They’ve wasted a decade on half-measures and in that time vast areas of the natural world have been destroyed,” said Jones, the group’s global project lead for forests. “They should be in crisis talks right now, but they’re still trying to grow demand for products that will drive forest destruction even further.”

The CGF told The Guardian in a statement Tuesday that “members have moved substantially closer to our goal of 100 percent sustainable sourcing of the four commodity groups. But over the last nine years we have also learned that the forces driving deforestation are more complex than almost any stakeholder realized in 2010.”

Member companies, the newspaper reported, no longer see the “sustainable commodities” approach as effective, so they have spent the past 18 months working with outside stakeholders on a new strategy that will be discussed at the summit this week and unveiled during U.N. climate week in September.

As leaders of consumer goods companies have spent the past decade learning their approach was flawed from the start, the Greenpeace report explains, “the trade in high-risk commodities has boomed.”

“In the Congo Basin, we are witnessing widespread environmental and human rights violations in the name of development and the global commodities trade,” said Victorine CheThoener of Greenpeace Africa. “It’s all a kleptocracy where governments and companies collude to loot our natural resources and ordinary people pay the price.”


Meanwhile, in Brazil, “the soya and cattle industries have been trashing the Cerrado—destroying the local environment, aggravating the climate crisis, and displacing and committing violence against Indigenous and traditional populations that have occupied the territory for hundreds of years,” Romulo Batista of the group’s local chapter said. “Global brands must bring their suppliers under control.”

Greenpeace analyzed the devastation caused not only by members of the CGF, but also signatories to the New York Declaration on Forests and those that “had a cross-commodity forest protection policy, or had expressed on their websites an ambition, goal, or commitment to eliminate deforestation from their supply chains.”

Earlier this year, the advocacy group asked more than 50 traders, retailers, producers, and consumer goods companies to “demonstrate their progress towards ending deforestation,” the report says. “Not a single company was able to demonstrate meaningful effort to eradicate deforestation from its supply chain.”

The report outlines how deforestation relates to recent warnings from global scientists about the rising likelihood of climate catastrophe and devastating biodiveristy loss unless the international community works together to rapidly reform energy, transportation, and agricultural systems.

Halting deforestation and restoring the world’s forests is the cheapest and fastest way to reduce greenhouse gas emissions and ensure rapid carbon uptake. In conjunction with phasing out fossil fuels, such action is essential if we are to limit global temperature rises to 1.5ºC. Some 80 percent of global deforestation is a result of agricultural production, concentrated in tropical countries whose forests store enormous amounts of carbon and are most urgent to protect. The destruction of forests and other natural ecosystems by industrial agriculture is also wiping out the Earth’s biodiversity: around 1 million species are now at risk of extinction.

Preventing climate and ecological breakdown requires ‘transformative changes’ to the way forest and agricultural commodities are produced, traded, and consumed, producing and consuming less meat and dairy, and phasing out crop-based biofuels and bioplastics. Such changes would also deliver major gains for human health and the health of our planet. Companies face a stark choice: clean up the industrial food system or clear out of the global commodities trade.

With the release Greenpeace’s analysis, Jones said, “Our message to companies is simple: evolve your business to prevent climate and ecological breakdown.”