THIS my friends, THIS is the main argument made every time someone advocates for stricter mandates and the elimination of personal belief or religious exemptions…HERD IMMUNITY.

“We have to maintain 95% vaccine coverage to prevent outbreaks!” they say. Translation: we need to blame the 2% of people who conscientiously opt-out of some or all vaccines for the fact that we have a few dozen cases of measles in the country. Now math is sort of my thing, but I know it’s not everyone’s. If we take 2% of those filing for exemptions and subtract it from 100% of the population, we end up with 98%…a number that is already higher than the “95% threshold” they claim we need to eradicate measles. 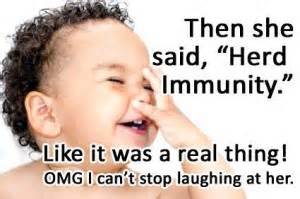 So essentially, there will NEVER be a time where we will achieve 95% immunity to measles, as a population even with complete vaccine compliance. While children’s vaccination rates might be that high in school settings, adults all around them are no longer immune. It’s why we keep seeing so many vaccinated cases and adult cases during disease outbreaks. Dr. Poland says, “This leads to a paradoxical situation whereby measles in highly immunized populations occurs primary in those previous immunized.”

So why are they forcing legislation in several states across the country for stricter mandates if that 2% is NOT responsible for measles? If in reality we are closer to 40-50% vaccination coverage as a population, why do they keep coming after vaccine-choicers with pitchforks asking everyone else to join in on the social witch hunt?

But wait, what about herd immunity? Herd immunity (originally termed in the 1930’s by Dr. Arthur Hedrich) was a theory created after witnessing patterns of natural measles immunity in the early 1900’s—where he concluded that 68% coverage was sufficient to prevent large outbreaks. But this theory relies on actual immunity. And people forget vaccination, as a flawed practice, cannot create actual immunity in everyone. A 2011 article in “Vaccines”, edited by Stanley Plotkin, says, “Much of the early theoretical work on herd immunity assumed that vaccines induced solid immunity against infection…” Theoretical… Assumed…

What’s funny is after the measles vaccine was licensed in 1963, the medical community declared a goal of eradicating measles by 1967. But 1967 came and went and it still wasn’t gone, 1977, 1987, 2000….the dates kept getting pushed, and the result was always the same. Meanwhile they continued to increase the hypothesized “herd immunity threshold”, eventually winding up at the extremely high 95% you hear today.

The reality is vaccine-induced immunity cannot create the same results that NATURAL immunity, the real basis for the theory of the herd, can. And yet every media interview throws around the term herd immunity like it’s going out of style…. And please, please, PLEASE stop telling me I should be thankful for herd immunity because it will protect my vaccine-injured child. We will never have vaccine-induced herd immunity, and it’s a little late for you to try to protect my kid now don’t you think?

To recap: There’s no such thing as herd immunity, as represented by the vaccine industry. The research used as the foundation for the notion of vaccine induced herd immunity was in reality an attempt to define, or measure, the ebb in the ebb and flow of infectious illness.

In 1933, a researcher collected Chicago measles epidemic statistics from a 20 year period. He determined that on average, after 67% of the population had developed the disease – and therefore, it’s assumed, immunity – the outbreak would diminish – would ebb – and end. It didn’t eradicate the disease, it didn’t protect anyone, it simply signaled a reduction in opportunity for infection great enough to trigger the end to that particular outbreak. It’s a cycle. A few years later, when enough kids – and adults – were susceptible, when opportunity had sufficiently increased, the disease would again flow; there’d be another outbreak.

The vaccine industry hijacked the term, herd immunity, using it to motivate vaccination. The claim alone that this illusive, theoretical phenomenon could eradicate the respective infectious illnesses is the height of arrogance. To accomplish the supposed feat, they jacked up the related percentage from 67% to 90%, then to 95% – as though we men can simply dictate a radical change in a natural cycle and predict the outcome, and Mother Nature will obey. Some have even called for 100% coverage to accomplish the task, akin to saying if we burn down every forest, every tree in the world, no tree will ever again emerge. It’s pie in the sky, delusion, and that’s just on the surface.

The immune system learns from experience. In targeting the adaptive response, vaccination, injection, breaches the natural flow of events. It thwarts a sophisticated process that is both protective and recuperative, depending on need. It misinforms and miseducates the immune system, interfering with proper immunological response to the respective infectious illnesses after subsequent exposures, stifling what would otherwise be true, complete recovery.

The proof is there for the picking. Most obvious is the scheduled need for one, two or three booster shots, depending on the vaccine, while in many if not most of the outbreaks that still occur the majority of the kids, sometimes 100%, are fully vaccinated, including required boosters. More subtle are the tendency in the vaccinated to develop subclinical infections after subsequent exposures; the resulting obfuscation of the true identity of the infection, of the disease; the likelihood that such infections will be surreptitiously transmissible, for an unknown period of time; and the loss of benefits that attend natural, fully symptomatic recovery, like protection against cancer, later in life.

So no, there’s no such thing as herd immunity via vaccination. It’s at best simply wishful thinking, at worst a means of forwarding what is now a captured paradigm and a strategy of dehumanization, as the rather amazing function of the natural immune system is stymied.

New laws to further mandate vaccines for these diseases are futile and to everyone going after “anti-vaxxers” because you feel they are to blame for these diseases, I suggest you redirect your anger to the manufacturers of vaccines that could not successfully recreate nature’s perfect immune system.

Vaccination is not the same thing as immunity.